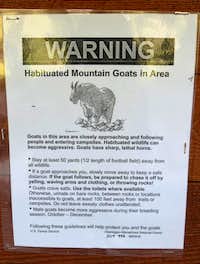 Mountain Goat Warning
Where did it go?  It was 8pm on Saturday evening and the four of us were clutching our ice axes and handfuls of rocks for defense.  An otherwise perfect approach hike day to the base of Black Peak ended with us driven from our camp wondering what to do next.  There was a big animal prowling around out there and we did not know when or where it would appear next.


For the eighth BOEALPS Intermediate Climbing Class Outingand third climb in the Alpine series climbs I was assigned Black Peak.  This was my second Alpine climb in the NorthCascades for the class—two weeks prior I was just up the road at WashingtonPass climbing the Liberty Bell group and Le Petit Cheval.  I was not complaining, the North Cascades area fantastic area—Washington’s Alps with nearly limitless possibilities forclimbing.  The trailhead for Black Peakis at Rainy Pass about four miles west of Washington Pass.  Fellow student Andrew and 1st yearinstructors Emily and Sara joined me for the climb.  Our instructors were students in the previousyear’s ICC.  BOEALPS is an all-volunteerorganization.  It is common for studentsto return the next year to instruct the class. Emily climbed Black Peak theprevious year as an ICC student so this was a chance for her to share herknowledge of the climb…and to confront an old nemesis.

Heather Pass
Our original plan for Black Peak was to climb it Saturday and hike out early Sunday morning, but with thunderstorms forecast to roll in early Saturday afternoon we revised our plan and decided to hike in Saturday afternoon and climb early Sunday morning when the weather would be better.  This meant a leisurely late start to the weekend that allowed time for brunch at The Eatery, a roadside diner in Marblemount, known for their cinnamon rolls with whiskey sauce.

The start of the approach hike is from the Lake Ann trailhead.  There was a sign at the trailhead warning us about mountain goats which none of us bothered to read.  We were more concerned about the threat of bears, but as it turned-out bears would be the least of our worries.

Above Lake Ann we veered of the main trail and headed up to Heather Pass.  From the crest of the pass we had a commanding view of the approach hike to our camp at Wing Lake and our ultimate goal, Black Peak.  Our plan was to climb the technical Northeast ridge of Black Peak (the right-hand side ridge) and descend via the South Ridge walk-off route.  The rest of the approach hike was a tedious snow slog traversing across a banked slope.  The scenery was good though, it was a warm day and there were snowmelt waterfalls everywhere.

Wing Lake Camp
We made camp at Wing Lake at the base of Black Peak.  The lake was still frozen over, but we found a really sweet spot to filter water and make dinner on some rocks that jutted out into the lake.  It was one of the best base camps I've bivyed at since Little Tahoma the previous August.  Although Wing Lake was still mostly ice covered and we were surrounded by snow it was warm enough to hang out barefoot at dinner.

Around 8 p.m. we had all our plans dialed in for the next day's climb.  We were going to wake up at 3 a.m. so we were just about to call it a night when a mountain goat wandered into our camp. I had never been that close to a mountain goat before and let me tell you it was a big animal.  This was a full-grown buck, who looked to be forty inches at the shoulder, was pushing three hundred pounds of solid muscle, and sported a pair of sharp eight-inch long horns.  Normally mountain goats keep their distance, but this one clearly had lost its fear of humans.  It had a reputation too; it was so well known that all most all on-line Black Peak trip reports include a description of run-ins with an aggressive mountain goat.  Emily encountered the same mountain goat the previous year and was still angry about the experience.  It blocked the route up the Northeast Ridge and got aggressive with her team.

The Crux Goat
Three years before our climb a hiker was killed in the Olympics by a different aggressive mountain goat so we were all nervous.  There was a sign at the trailhead warning about habituated mountain goats and giving a list of instructions for how to deal with them.  Turns out it was a good thing we didn't read it, most of the advice was exactly the wrong way to deal with the Black Peak mountain goat.  Our first attempt to deal with it was to waive our ice axes and yell at it, which was totally ineffective only making the goat display aggressive behavior like pawing the ground and snorting.  We then tried walking away from our camp hoping that it would lose interest and wander away.  This only made it more curious and results were more comical than effective. We thought we were safer as a group, so we moved in a clump all the while being followed by the mountain goat.  To picture the scene think of one of those Benny Hill chase scenes set to the sound of zany zydeco music.  Every time I thought we had finally ditched the mountain goat I would say something like "Let's give it five more minutes and go to sleep" and like clockwork, five minutes later when we were all relaxing it would wander back into camp again scaring the bejeezus out of us.

Curious or Dangerous?
In the end we found the solution was to just ignore it.  We stood in a circle facing each other so that one person would always have an eye on the mountain goat with out making eye contact with it.  That actually worked and after awhile the mountain goat finally lost interest and wandered off.  Emily felt she finally understood the goat better and made her peace with it.  We were in its territory and it was just investigating who the interlopers were.  We were finally able to go to sleep at 9pm.  The mountain goat did wander back through one more time, I heard it outside of my tent at 9:30pm sniffing around but it didn't linger and I finally was able to get some sleep around 10pm.  The hardest part about the Black Peak climb ended up being having to deal with the goat, so we nicknamed it "The Crux Goat."  Climbing topos for Black Peak should be updated to include at least one pitch of 5.10a goat.

Black Peak Route Overview
The next morning we were up at 3am and were hiking by 4am.  Even though it had been warm and sunny the previous day it was cold enough overnight that we needed our crampons for hiking on the firm snow of the approach to the rocky ridge.  Supposedly Black Peak's Northeast ridge is an easy climb, but it looked anything but that from the start.  If Emily hadn't been there last year we wouldn't have believed it was something we could have done.

The primary skills goal of the Black Peak climb was to practice "simul-climbing" a technique where the rope team does not set fixed belays but every member of the rope team is climbing at the same time and the lead climber is setting limited amounts of pro anchors in the rock.  This is for climbs where it is unlikely that you will fall, but if you did the consequences would be dire so it balances speed with safety.  Black Peak's Northeast Ridge was the perfect climb for practicing simul-climbing.  The ridge was not tough climbing, but they were steep drop offs of hundreds or even thousands of feet so, as they say, "don't fall."

Most of the Black Peak Northeast route is supposed to be low 5th class scrambling with only a few sections of 5.4 climbing, but due to some inept route-finding on my part I managed to take us up some of the more difficult options available.  We did stay close to the top of the ridge so never got into trouble and had a textbook perfect climb.  It is easy to get off course if you are not paying close attention and I have heard stories of climbers getting into serious trouble when they got off-route on the Northeast ridge.


We got to the summit without out a mountain goat in site…we were stoked.  We met a group of hikers at the summit who had scrambled up via the South Ridge route and they had a run-in with the Crux Goat.  One of the guys was still rattled by the experience; Cruxy got within a few feet of him and followed him closely for a long while.

The South route off of the summit is considered a walk-off and is well marked with cairns.  That said it's huge pile of scree so even in broad daylight it still took some route finding skill and was a slow go because it was the sort of loose-rock covered terrain that's easy to twist your ankle on.
Once we got off the rock was had a series of fun glissades back to camp.  For those who do not know "glissade" is a fancy French word for sliding on your butt on snow.


Summit day we woke up at 3am and started hiking by 4am.  We would finally return to the cars at 5pm, hiking for thirteen hours, early enough back that we had time to hit the Skagit River Brewery for dinner on the way home.  Both Andrew and Emily are were on the ICC Alpine 2 team that successfully climbed Forbidden Peak in one day hiking car-to-car non-stop for over twenty-five hours.  For my Alpine 1 climb of the Brothers Traverse our summit day was twenty-two hours of non-stop hiking and climbing.  So this is how much the ICC has distorted my perspective.  I felt that the thirteen hours we spent hiking and climbing Black Peak on Sunday was a "short" day. 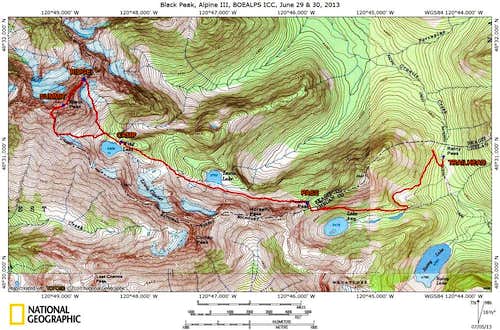 Great looking trip and well written report. I'd have been a bit nervous too with that goat hanging around after the ONP incident. Thanks for the write up!