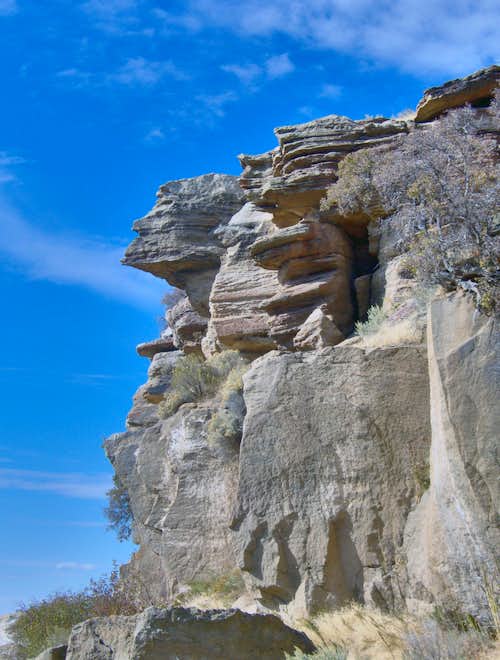 Above the quarried rock still sits some native sandstone
Native Americans once inhabited the Boise Valley and are said to have gathered at a remote site in the foothills where an outcropping of rocks dramatically juts out and touches the sky. Nearby geothermal hot springs fed into small creeks and formed bathing ponds frequented by the Shoshone, Bannock, and Paiute Tribes. The Boise Valley was a peaceful gathering place and other traveling tribal nations were welcomed at the hot water springs which were used for healing and spiritual reasons. The sacred site known as Table Rock, was a ceremonial plateau with hot springs on all sides, and the Castle Rock formation nearby, holds the resting places of their ancestors.
In the treaty of Fort Boise, October 10, 1864, the Boise Shoshoni agreed to relinquish Boise Valley, Boise Basin, and some adjacent lands for an undetermined sum. So far, no one has bothered to figure out the amount, and the United States Senate never ratified the treaty. As far as the record shows, they still belong to the Indians.
Table Rock was first described in a geological survey of the area in 1898 but it's value as a building material was discovered earlier. Its first recorded use was in the old Fort Boise quartermaster building, built in 1864 that still stands today.  Soon after it was used in the construction of a prison and many other buildings in downtown Boise. After the construction of the prison, inmates did what was called "penitentiary stone work" using horse drawn wagons to get the stone down from the quarry. In 1906 the Capitol Building Commission purchased 35 acres for use as a quarry for the new state capitol building in downtown Boise. In 1911 major improvements were implemented with the building of a road and a tram line. The tram line was gravity operated where a loaded car was sent down causing the empty car to go up. These improvements allowed much more stone to be brought down from the quarry and it was used in buildings across the United States.
The quarry remained idle from 1940 and saw little traffic until it was rediscovered by climbers in the 60s. When the rock mining ended, the quarriers left behind a clean, cleaved cliff that ran for nearly a quarter mile and was studded with ledges, finger holds and cracks making it a perfect place for Boise rock climbers to gather during the late 60s and early 70s.

For those who live in the vicinity of Boise, Table Rock is an unmistakable landmark rising up on the northeast side of town. The climbing history of its rock walls, which are graced by seemingly random bolt placements and the occasional chalk mark, is slowly disappearing as time passes and excavators mine the northeast corner for building materials. Tabler Rock, like the Black Cliffs, was a training ground for Boise climbers who took what they learned to the mountains where they established impressive routes like the north face of Mount Brietenbach. Though the active rock quarry on the northeast side of the rock has changed the landscape considerably since the 1970s, climbing opportunities still exist on Table Rock. Tom Lopez

The silica infused brown sandstone found in the foothills of the Boise Front is relatively rare in southern Idaho. Formed by sediment from a large lake, (Lake Idaho) and fused with silica from the hot springs that are found outside of Boise, the resulting cement hard rock made it a perfect place for Boise rock climbers to gather during the 60s and 70s. Bouldering short, but difficult rock moves had become a legitimate form of rock climbing in the country during the 60s when the legendary John Gill introduced gymnastic training to rock climbing moves. During that era, Table Rock quickly developed into what could best be described as Boise’s first outdoor climbing gym and meeting place. The low elevation of Table Rock offered year around opportunities and it was not uncommon to find climbers practicing there throughout the winter. The climbing was not limited to the quarried rock found on the south side of Table Rock. In less than a decade, all four sides of Table Rock were extensively explored and climbed including the large roofs that are found near the cross. During the 1970s legendary climbers Henry Barber and Jim Donini visited and climbed routes in the quarry.

The south side of Table Rock, the Quarry, offers clean, cleaved off slabs of hard sandstone, left exposed from decades of quarrying. During the 70s this area became the hub of local climbing activity. Un-roped bouldering was the main activity, but it was not uncommon to see some climbers practicing aid climbing or rappelling. Crash pads were unknown at that time with the exception of a small patch of carpet that might have been left behind for wiping sand from your soles on a wet day. Spotting a partner was a given and it helped to know there was a “mosh” landing on some risky moves. Where it was safe, cat like jumps were perfected if one fell off a boulder but they didn’t always work. I know a few of us went home early with sore knees or a sprained ankle. This “climb or fall” technique also provided great motivation for one to perfect the moves on the taller, riskier boulders. Like modern day sport and gym climbing, the quarry provided us a place to practice extremely hard climbing moves without the distraction of high exposure or the risk of a big fall.
Frank Florence, co-founder of Sawtooth Mountaineering describes it like this;

“I think that the spirit of the Boise climbing community of the 70’s was special. It was a fairly small group of people, a tight enough circle that we all knew one another to some degree. And there was real talent there. Local climbers who pretty much started from scratch, like Tom McLeod and Charlie Crist, as well as young Turks, like yourself [Bob Boyles] and Mike [Weber]. Then there were the “externals”, guys who had some experience climbing elsewhere that they could bring to their efforts around Boise. Dan McHale, the Rozells, and Bob Jahn are good examples. I might have taught you a few things about ropes and knots, but they were the exemplars when it came to pushing abilities and standards. We all learned from them, and that sharing of experience, talent, and knowledge was critical for every one of us and led us to wonder if we couldn’t take it a little further. I don’t want to over-romanticize the times, but it’s fair to say that our climbing scene had elements in common with the camaraderie and positive competition found in British pubs and Camp 4 in the same decade.”
During the 80s a new generation of younger climbers including Ted Thompson and Pete Takeda were climbing at Table Rock. For four years, Curt Olson, the founder of High Country Sports in downtown Boise sponsored what was the first semi-pro bouldering competition in the United States at Table Rock. The competition attracted a young Todd Skinner who is considered one of first proponents of modern sport climbing and top climbers of his generation.

The quarry stayed an active place for climbing through the early 90s when the mid-section of the quarry was sold to a local company and opened to rock mining after sitting idle since 1940. The Table Rock sandstone had always been prized as a building material and no doubt, the extraction of rock generated economic benefit to those who owned the mineral rights. The sandstone can now be found in some of the valley’s most expensive homes and at the entrance to upscale developments where it’s used as billboards to announce the name of the subdivision. Local climbers, a loose knit group at best, rallied for a while to save the old quarry, but lacking any kind of formal organization their voices weren’t loud enough to raise any local activism. Economics won out and rock climbing at the quarry has never been the same.

Hi R.e.
your article was a reminder of our sandstone quarry climbing in the same period. We in the north west of England were blessed with many old "retired" sandstone and gritstone quarries.

In particular, near Liverpool we had Pex Hill and Frogsmouth quarries that were of hard red sandstone with verticle walls ideal for training and evening fun. Our climbing grades in the mountain crags of North Wales benefited greatly from our sandstone training. Woolton quarry was of the same rock but still being worked. (stone from there went into the Liverpool Anglican cathedral) and (the Beatles original name was the Quarry Men as they lived near the Woolton area).

thanks for stirring the memories.