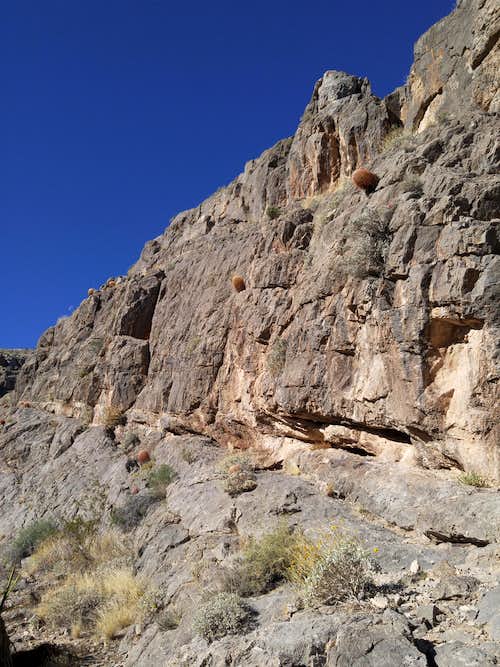 North Wall
If Red Rock is wet or too busy, time is limited and you need a super-short approach, or if you're just looking for a change of rock type, the Gun Club is going to make you happy. Unless you hate bleeding, that is, for the rock is a sharp limestone. Even if you don't bang a knee or elbow and rip it open, your fingers are going to hate you after a few climbs here, and if you're going to climb here often, don't use your favorite shoes unless you like replacing them monthly.
Although there are a few lines that look leadable on gear (with suspect rock quality), it's strictly sport climbing here, with most routes nicely bolted, meaning you usually don't have to go in terror until clipping the first bolt or in between bolts. That's not "hard-core," but on single-pitch sport routes, I'll take safety over thinking I'm a badass.
Many of the anchors are dual cold shuts or mussy hooks, making lowering and rappelling easy. Others are just hangers with chains or rings, so be prepared either way.
Routes tend to be 40-50'.
I get the sense that despite the easy access and the good bolting that seems to be the norm, this place doesn't get too crowded except when the sandstone is wet. During one sunny spring break, I visited this spot three separate times and never saw another climber. 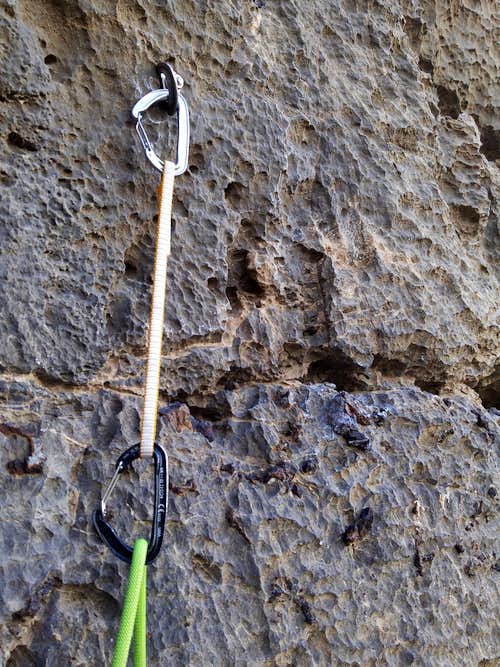 From 215 on the west side of Vegas, take the West Cheyenne/Cliff Shadows Parkway exit and head west. The road quickly bends north. At its intersection with Alexander Rd., turn left and drive into a public park. Take trails leading into a canyon with two parallel walls. Once in the canyon, you can head along a trail following either wall, and you'll soon start seeing bolted lines.

The North Wall (faces south) has more lines and more moderates. The South Wall (facing north) is harder overall, though both walls have at least one 5.8 and at least one 5.12. The route lists come from comments on Mountain Project by a local climber; he admits that the names in quotes are ones he just made up. Routes in bold are ones I have climbed.
Update-- the North Wall has several additional lines now. I have talked to someone from the group that put them up, and he confirmed that they had not named the routes and that my estimates for grades were about on par with theirs. Some of those new lines, those I have climbed, I have added in italics (and bold); After the last of those, there are still 2 or 3 new routes in the 10a-10c range, but I have not climbed them yet and have not included them lest I unintentionally create confusion.

From left to right as you walk along the crag from the parking area:

From left to right as you walk along the crag from the parking area:

None other than watching out for private property, as there always is some kind of construction going on in the area. I am not sure who manages this land, whether it's BLM, the state, or the city or county.

Spring, fall, and winter. Summers can be okay if you show up early or late and climb on the shaded side of the canyon.