One of the lakes at Panch Pokhari ("Five Lakes")

Although they are among the most dramatic mountain landscapes on earth, there are few places in the Nepal Himalaya where there is a sense of wildness. The Hongu Valley is one of those places. Flanked by crystalline 6,000 and 7,000 meter peaks, and guarded by high passes, getting into the Hongu requires some degree of commitment, skill, and luck. Getting out requires more of the same.

The Hongu is within the Makalu-Barun National Park and Conservation Area, which soars out of the Arun River Valley’s 1,500-foot elevation to the 27,765 foot summit of Makalu in just 25 miles. This park is home to an amazing diversity of pristine ecosystems, from tropical rain forests to gigantic hanging glaciers. The region’s 3,000 plant species receive the full force of the Himalayan monsoon, with some 120 inches (3,000 mm) of rain falling each year. The lower elevation’s sub-tropical sal forests contain spectacular orchids and other rare plants. The 10,000-14,000 foot sub-alpine zone is magnificent, moss-covered forests of fir, birch and rhododendron. And above that the alpine zone is the home of rare and delicate wildflowers, such as the blue poppy, that were prizes of the great plant hunters such as Joseph Hooker and F. Kingdon-Ward during the late 19th and early 20th century. None of the plant hunters would reach the Hongu, which was first explored by mountaineers after 1950.

The park’s wildlife includes musk deer, ghoral, Himalayan tahr, the elusive snow leopard and red panda. Birders can hope to see some of the 400 species, about half the number found in the entire USA. I have seen about 50 myself, without trying too hard. Roughly 30,000 people of various ethnic groups and religions also live within the park boundaries.

For trekkers there are two typical approaches to the Hongu. I am fortunate to have done both.

The more common approach is from the west over the 18,000 foot Mera La, as an extension to the climb of Mera Peak. The second, eastern approach, travels up the beautiful Barun Valley then over two 20,000 foot passes, Sherpani Col and West Col. In either case the normal way out is north, over the 19,000 foot Amphu Labsa, the ice-draped pass above Panch Pokhari (Five Lakes). A trip through the Hongu is usually part of a circuit or one-way journey and most parties will not backtrack unless forced. I know of several recent examples where this occurred, with heavy weather, accident, or illness prompting a retreat.

The Mera La approach is covered in some detail on the main page. In summary the trek heads east from Lukla, crossing the 15,000-foot Zatra La, then dropping with knee-wracking steepness into the Hinku Valley. (The night before my ascent of the Zatra I had food poisoning and spent much of the night outside the tent vomiting. On the way up the pass I barely keep up with the heavily laden porters, who dubbed me the bistari dai, the elder brother who goes slowly). Reaching Mera La requires some glacier travel, and the descent into the Hongu is no more than a steep Class 3 scramble (albeit at 18,000 feet), making this the easiest of the Hongu approaches. The trek north from here, passing directly below Chamlang, which you never tire of seeing, climbing into ever more wild country up to Panch Pokhari at 17,500 feet.

The way in from Makalu Base Camp and the Barun Valley is a somewhat tougher proposition, crossing two 20,000-foot passes that require roped climbing and fixed rope rappels. A 20,000-foot camp is also necessary, since crossing both passes on the same day is unlikely. This trek spends about two weeks above 16,000 feet. Even reaching the Barun can be tough due to storms on Shipton pass, the 14,000 foot series of passes between the Arun and the Barun. (Yes, Eric Shipton did pass this way, in 1952). The Barun is one of the most stunning places I have ever seen, with its cloud forests, waterfalls, Buddhist shrines, and peaks soaring incredibly high above you. The crossing of the two cols into the Hongu is one of the more difficult journeys that can still be called trekking.

The climb up Sherpani Col (20,245' / 6135m) is steep 3rd class loose rock (it reminded me of a more difficult Longs Peak Trough, elevated 6,000 feet), followed by a steep rappel onto the huge ice basin below Baruntse. A camp is usually made on this basin near West Col. This is Camp I for Baruntse climbers. A second long rappel drops you into the Hongu, and two days of difficult trekking over glacial rubble brings you to Panch Pokhari, where you join the track that came up from Mera La.

The normal exit out of the Hongu, the Amphu Labsa is also not to be taken lightly. At least several hundred feet of rappel or fixed rope descent is necessary right from the top of the pass, and portions of the remaining 3,000-foot descent into the Imja Valley are highly exposed.

Time required to complete the trek
This trek takes 3-4 weeks to complete. You could possibly shave a few days off but the Hongu is a bad place to be if someone develops altitude illness. The route from the Arun Valley is longer than the Hinku - Mera Peak circuit. A rough approximation of the time required, including some acclimatization days:


Resupply Options
The resupply options are limited at the start of the trek and non-existent once you are actually in the Hongu. When you reach Dingboche you are back on the main Everest trekking route, so you will be able to stock up on coke, whiskey, and other necessities. This is near the end of the your journey.

For the Mera Peak circuit it may be possible to pick up some supplies as far as Khare. The tea houses that are now there were not present on my trek, and I am not sure how well they are stocked. I suspect that things like vegetables and fruit would be of limited availability, if at all. If anyone has further information about this please add it to the page.

From the Arun Valley route, for the first week you are trekking through inhabited hill country and most supplies are available. Once you pass Tashi Goan there is virtually nothing until Dingboche, a full two weeks or more. During my trek our staff packed in a large supply of fresh vegetables, rice, flour, fuel and other items at  Tumlingtar, for that part of the trip, but then supplemented our meals during the first week with purchases from the villages along the way.

So in general you must start the trek with any special items you require, and nearly enough food and fuel to carry you through the end.

Evacuation
The Hongu is a difficult place to escape from in the event of trouble, as any route out involves crossing a high pass or two. On both of my treks there was trouble.

In 1994 as we were ascending the Mera La one member fell and broke both of his legs, and one of our guides came down with severe pulmonary edema. They were evacuated to Tangnag, the guy with the broken legs carried by porters. A runner was dispatched over the Zatra La to Lukla to summon a helicopter. This arrived and carried them back to Kathmandu, but it took three days.

In 2002 one of our porters developed cerebral edema as we crossed West Col and descended into Panch Pokhari. He was given bottled oxygen and dexemethesone, and seemed to improve. Our schedule called for a rest day at Panch Pokhari to explore the area. On this day several of the Sherpas attempted to evacuate him into the Khumbu. However, this required crossing the Amphu Labsa. They made it over but the ported died, and is now buried, at the bottom of pass. It could have been any of us.

In 1996 and 1999 I know of parties who were just ready to enter the Hongu when a huge snowstorm hit. The 1996 group was at Khare, and the 1999 group was in the Barun valley, having crossed Shipton Pass. In both cases they made it out safely, retreating they way they came, but it was an epic.

It is possible that a satellite phone would be useful, but I am not sure what other means of electronic communication could be established once you are in the Hongu.

It remains a wild place, with the associated risks.

Altitude sickness, rockfall, and avalanche are the big dangers on this route. In addition to standard trekking gear, which I won’t detail here, you’ll want basic mountaineering gear: harness, helmet, rappel gear, plastic boots, crampons, and ice axe. How the porters manage to do this in their meager gear and footwear remains a mystery to me.

February 2009. The description and account of an Amphu Labtsa crossing was added to the forums by AndrewSmyth:

Completed the pass only a few months ago so happy to provide a very good 1st hand account.

Fitness - You will get tired but find it comparitively easy compared to Mera Peak, mainly because it is a shorter day, its 600m lower, the approach days are fairly gentle, and you will have aclimatised well.

Technicality - if you have done winter climbing before and abseiled, you will find this fairly non-technical and straight-forward. Its not even Scottish Grade 1 (circa French PD). There are 3 or so short ice pitches on the way up and 1 rappel over the other side of about 15m.

Exposure - none to speak of on the way up, the top is fairly wide, but there is a fair bit on the Nth side on the way down, after the 15m rappel. Our Sherpa told us to take off our crampons after a while, well after the end of the fixed ropes, only to find a lot of narrow iced up ledges around the corner that were very dodgy to say the least - One slip and it was a nice 800m plunge - needless to say I wasn't too happy and my tip would be to keep your crampons on till you are off all of the snow/ice. I believe this is where a lot of accidents/deaths occur on the pass - 3 Sherpa had died there in Oct 08, just days before we got there. I had a minor slip at one point and our porters dropped several thousands of dollars worth of gear in another incident.

However, like previously mentioned, it is spectacular and one of the memorable days of the trip. I can still picture the views of Ama Dablam, Island Peak, Baruntse, and Lotse (just to name a few) as we speak.

The only other thing to mention is there may be much more snow/ice for you as my guess is you are going April? 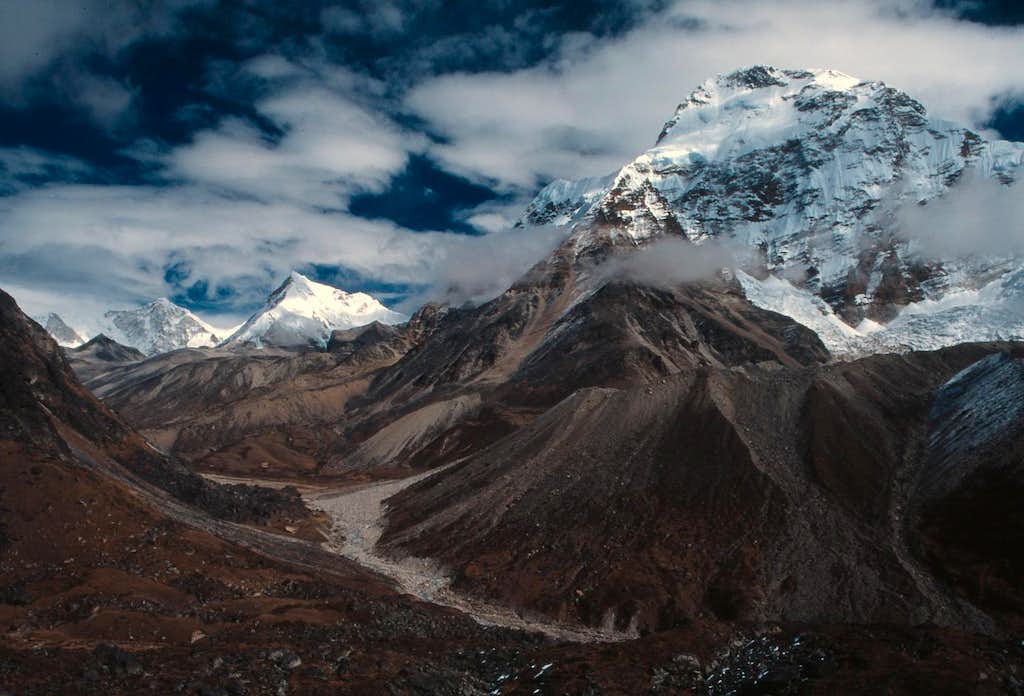 Maybe you`ll find something useful in it to add to the page(?)

thanks again for a great page!
Michael

hi!
i was on the Lukla-Mera-Lukla trek on April 2005, and, even if our western guide was vegetarian (and she didn't like eggs, as well) , we had no problem at all (see the 5800m lunch picture!), but the point was that everything was organized in advance by our trekking company (also dietary requirements)

in any case in the hinku vally there are teahouses in which i saw eggs and vegetables, but i do not know how much of them was available for sell

hope this can be useful!