The huge bulk of Mount... 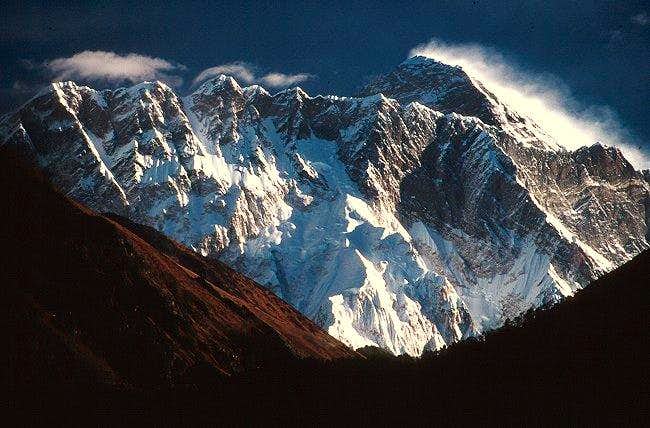 The huge bulk of Mount Everest rises above the Nuptse wall.
A jet-stream driven plume of snow is an indication of the conditions up there.
« PREV NEXT »

that is spectacular. I am awe struck looking at the picture. Cant imagine what it must be like to see such enormity in person.

Thanks! Yes indeed, it is an imposing presence. I'll never forget seeing my first Himalayan peak: after days of trekking through mist, the clouds part and I realize I am seeing an incredibly high and white mountain, not just another cloud. I was dumbstruck. No wonder they have religious significance to people who live in their shadows.

i love this photo

currently reading a book on someone's summit of everest. this literally brings everything into perspective. sweeeeet

Where's it taken from?

Hi Martin, Thanks much. If my memory serves me well, this was taken close to Tengboche, on the walk coming down from Dingboche, after I had come over the Amphu Labsa. There are places along that stretch when you can glimpse Everest rising above Nuptse.

Thanks again for your excellent TR, and let me add my kudos to Gwen's efforts, which I neglected to say in my first comment.

Yes that makes sense. I thought at first that it might have been from Ama Dablam. In which case I would have thrown myself (metaphorically) at your feet in worshipful adoration!

I'll pass on your kind words to Gwen of course.

I HAVE NEVER SEEN THIS RANGE PHOTOGRAPHED FROM THIS SIDE. THIS AREA WOULD BE GREAT FOR A HIGHLY TECHNICAL CLIMB TO THE SOUTH COL (ALSO KNOWN AS THE HARD WAY.
BIN

Were you SE of the Nuptse wall when you took this unbelievable photograph? Do you have any more posted from this area?

Hey BIN, Thanks much for your comments, glad you like the photo.

If my memory serves me well (not always worthy of counting on) I was somewhere on the trail between the Tengboche Monastery and Dingboche. I was probably closer to Tengboche because I know Everest is visible from there. As you get closer to the junction that splits off to Pheriche then Everest is hidden behind Nuptse. This is mostly due south of Everest.

I have some more photos posted from the region, but not aimed in the same direction. I have a shot of Lhotse South Face which you can find on my Hongu Valley Trek page, along with others. Most of those photos, however, were farther south and east.

As far as getting to the South Col from there, you do realize the Western Cwm is in the way? But, don't let me stop you!

Thanks for the comeback. I do know about the Kumbu Icefall, Western CWM, and south Col Route. I was speculating as to the degree of technical difficulty in doing it the HARD WAY.
Your image is one of the best, in my opinion, of the grouping pertaining to the Everest area.