The Hypodermic Needle of the Wasatch (Photo Trip Report)

The Hypodermic Needle (a.k.a. The Needle) is a superb snow climb on the east face of North Thunder Mountain, in the Central Wasatch Mountains of Utah. This is one of my favorite snow climbs in the Wasatch because of the stunning scenery and the wide variety of terrain you travel.

The Needle is a narrow couloir through granite cliffs with a sustained angle of 50 degrees for 1,100 vertical feet. The Needle is in a remote location for the Wasatch and is rarely visited, this nearly guarantees an adventure with complete solitude. We climbed this couloir on June 6th and the snow was adequate for good climbing, although the top 50 vertical feet were melted out. The best snow conditions for climbing are probably found in mid May. 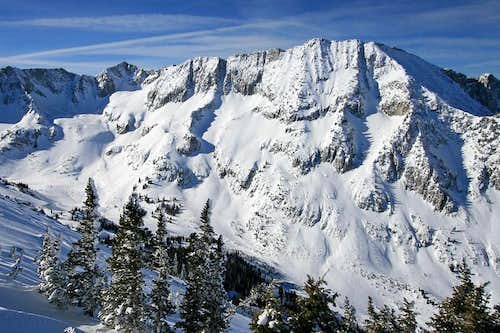 The Hypodermic Needle (right, in the shadow).

There is no trail ascending Hogum Fork, so the first crux of the route is simply crossing the canyon stream and finding the mouth of the fork. We planned to begin our attempt at 5am, in the dark, so I did a short recon of the stream crossing two days before and found the famed logs that provide the only crossing over the roaring stream. After the crossing, we followed a dry creek bed up the granite slabs guarding the entrance to Hogum Fork. Our original plan was to follow the flowing stream up Hogum, but our eager anticipation to climb got the best of us and we ended up on a wild bushwhack through steep, treacherous terrain. We received a bit more adventure than we bargained for this early in the day, but made it out alive while unintentionally dislodging large rocks and boulders during our bushwhack / scramble. 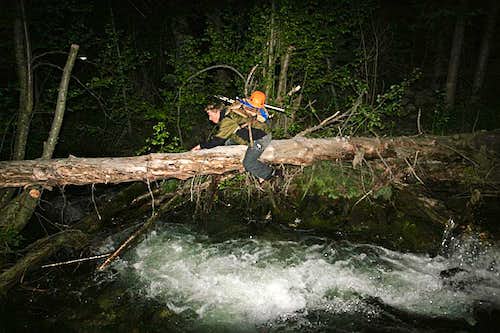 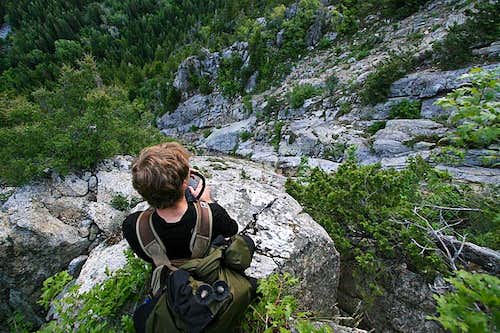 This can't be the best way up Hogum Fork?! 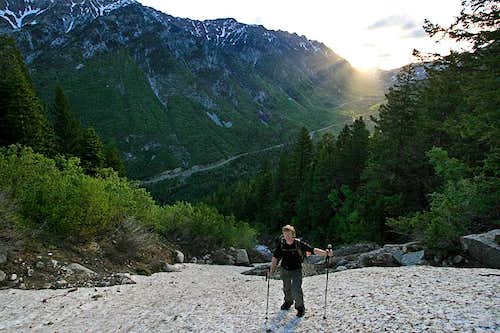 Above our messy bushwhack we finally hit snow.

Entering Hogum Fork was a feast for the eyes. Dustin and I were giddy at the opportunity to travel through such stunning terrain. It was a fun sense of exploration as this was the first time for both of us in this corner of the Wastach. We gradually approached the apron of The Needle, but it was difficult to recognize the correct couloir from our perspective. We ended up hiking too far south toward the base of another couloir named "The Sliver". With thunderstorms forecasted for the afternoon, we were concerned we had wasted too much time hunting for The Needle, and that we should just climb The Sliver. Darker clouds were beginning to surface in the north, yet we had no ability to look west and view what was coming our direction. Dustin texted his girlfriend who advised us the sky was clear for our section of the mountains. With that news our decision was simple: back track to The Needle! 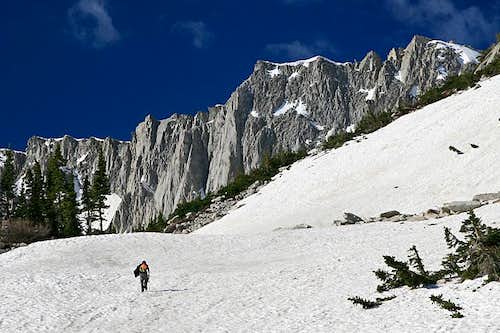 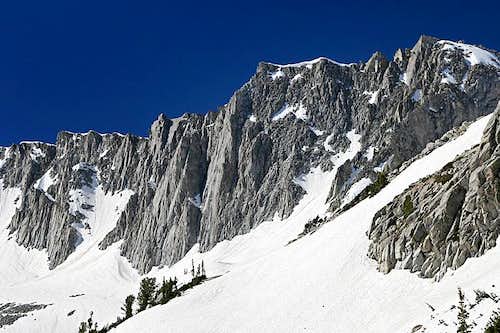 Ah, the possibilities (Thunderbolt Ridge, 5.4, on the right). 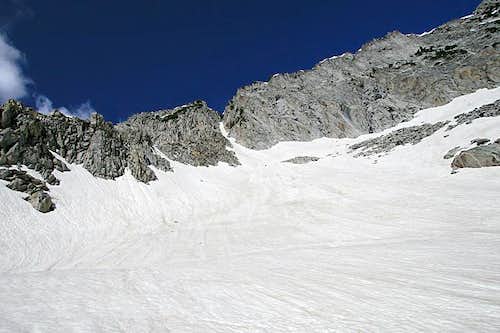 The Sliver. We've gone too far. 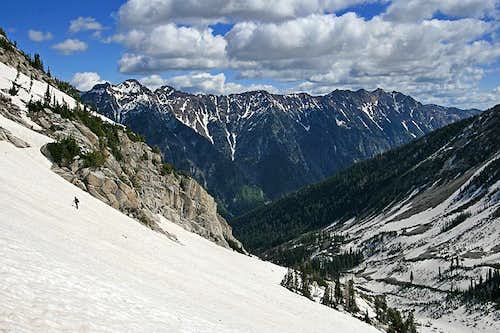 Backtracking to The Needle. 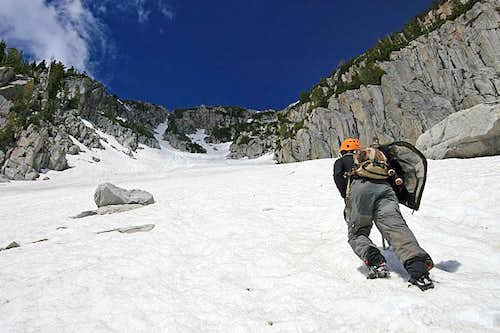 The Needle. This is what we came for.

The Needle and The Summit

The meat of the couloir and the subsequent scramble to the summit of North Thunder Mountain were phenomenal. The snow was great (maybe a little soft), the weather was perfect, and the scenery was stunning. This was fun! 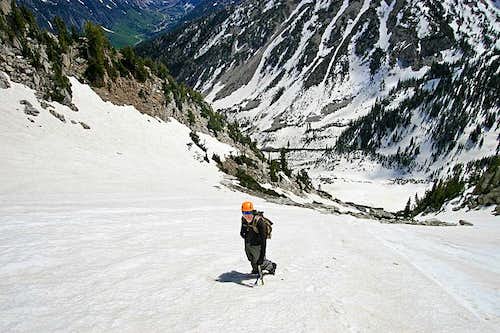 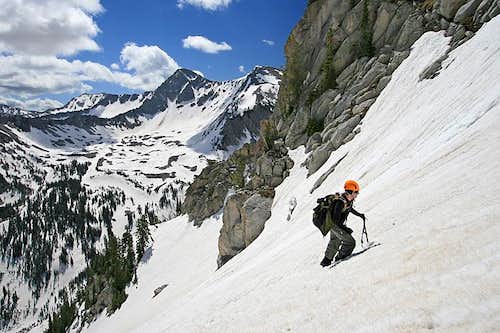 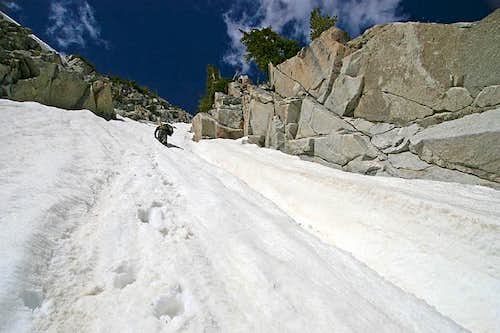 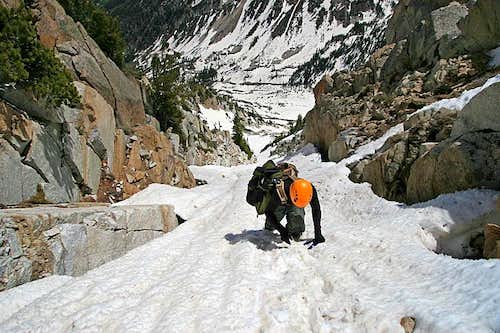 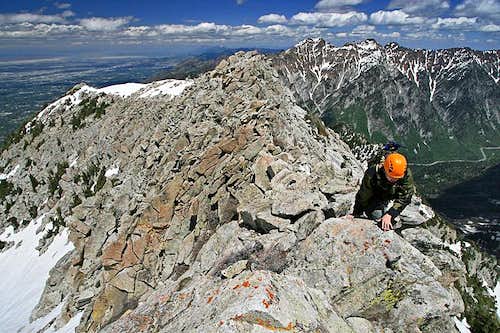 Scrambling along the summit ridge. 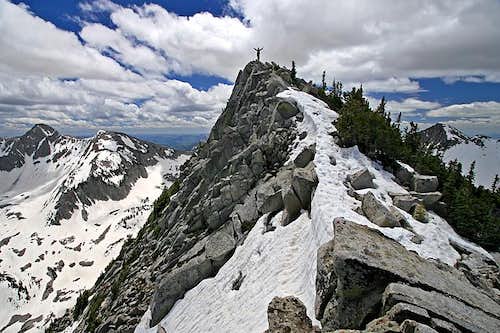 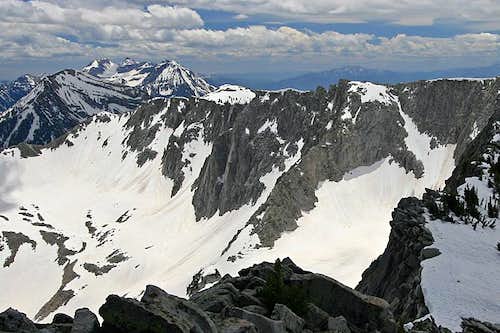 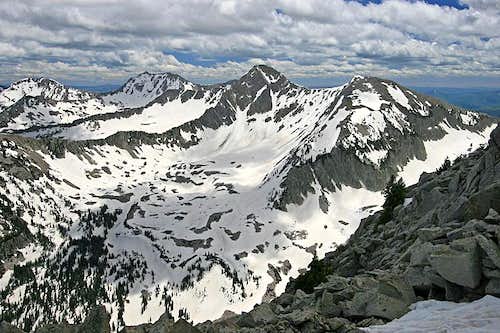 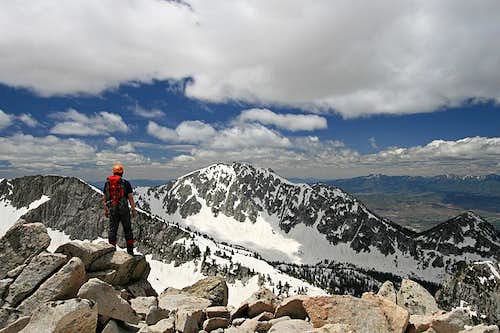 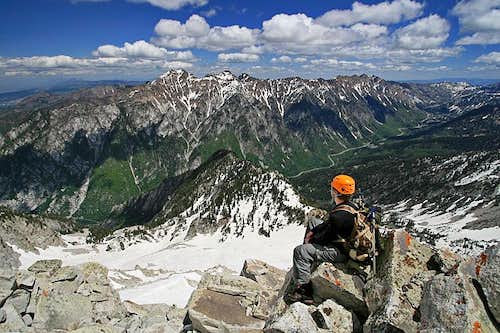 Words can't describe the satisfaction of enjoying the summit of North Thunder Mountain. It was simply too good! For the descent, our initial plan was to take a fast glissade down Coalpit Gulch. Unfortunately, from my prior recon it was evident that the lower waterfall of Coalpit Gulch was going to be a major obstacle. Not only would a roped rappel be mandatory with the raging water, but we would have to rappel down through the waterfall and downclimb some steep, wet rock. The safer option would be a glissade and hike down Bells Canyon. Although a Bells Canyon descent is much longer, we both felt more comfortable with that route. 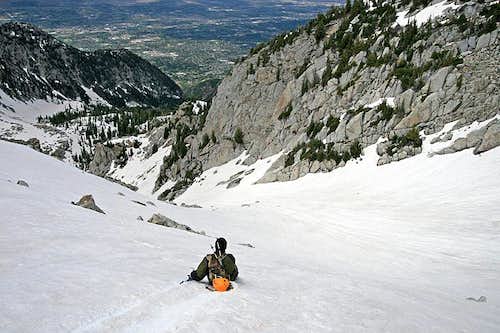 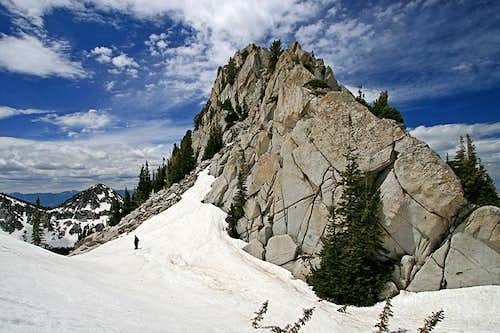 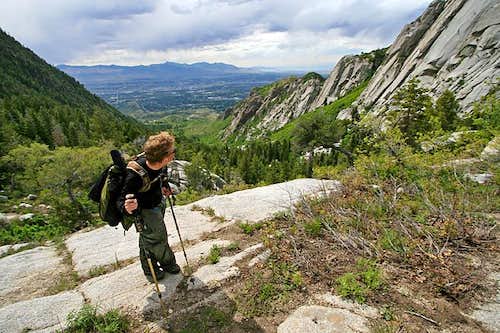 Almost home, with a light storm moving in.

We reached our car at 5pm, exactly 12 hours after our start. Just as we removed our packs, light rain began to fall. Could the timing be any better? Life can be awfully sweet when things go your way. This was a perfect day in the mountains.

Looks like quite an adventure! Good job, and thanks for sharing the pictures.

I noticed your car in LCC that morning and I kept my eye on the Needle off and on during the day, but I guess I was too far off (doing the Red/White/Red/White) to spot you guys. From the top of White Baldy I did comment that it looked that the top of the Needle was melted out, and from what you say it was -- so how tough was that section?

Just simply boulder hoping. It was steep, but easy scrambling. I'm jealous about the Red/White deal. Dustin was telling me about that route, which he had climbed the week before. Sounds like a fun day out.

That looks like so much fun! Glad you had a good time!

Will get to it

Next year for sure...

and helpful in getting a feel for what the route involves.
I was relieved to hear to you didn't descent Coalpit, that sounds really treacherous this time of year. Even a month ago when I did North Thunder, we ruled out Coalpit. I'm thinking February and March is the time to do it.

Yeah, the efficiency of Coalpit is so tempting, but better safe than sorry. We need to ski Coalpit next March. What a ride that would be!

Count me in for skiing Coalpit next year! I meant to this year, but schedule, partners, and conditions never converged.

I knew it was worth all the picture taking. Glad you lug that camera around because look what you get! Great day, it got me pumped and on monday I actually hit South Thunder from Bell's in an attempt to traverse over to North Thunder on that tasty looking ridge. Too bad the weather turned, we go rained on 3x, hailed on and snowed on, plus I got a sunburn! Crazy Utah weather.

this looks like a great snow climb as well as ski descent. i know how horrid the bush wacking at the bottom of Hogum can be. great photos and commentary. The spring thunderstorms always keep you on your toes.

I was in that area during the winter, unfortunately the views were not so good that day, must do it again with better vis. It must have abeen a long walk out, even on skis the bottom of Bells seems to take forever.
Good Job!

Another fantastic trip report and your pics are incredible as usual! I'm glad you guys had a great time. I'll have to add this route to my list for next spring.

This looks like a lot of fun. I'll definitely have to do this route soon.

Looks like there is more snow than usual this time of the year?

Yeah, there is. The snow totals this year were a bit over the average, and May/June temps have been under the average. Good combination!

thanks for sharing the experience :)
happy climbing!

Like others, your report inspires the calendaring of this route for next spring. Your choice of Bells Canyon for the coming out party was a wise one. FYI, on Tuesday our little group hiked up Bells and climbed the couloir to the prominent notch between Lone Peak and Rocky Mouth Canyon Peak, and we then scrambled and snow-climbed to the top of Lone Peak. That couloir was not as steep, though, as the needle and only 850' of adventure. Thanks again.

Great TR and photos! Looks like an awesome route. Thanks for putting it on my radar.