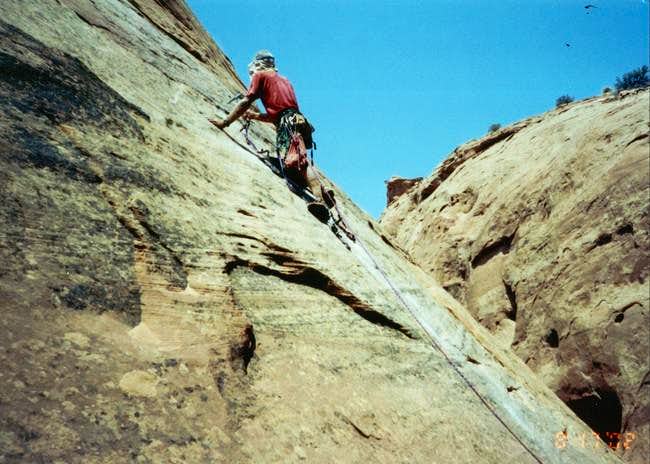 The route looks relatively low-angled in the photo, but this is by far the most dangerous ascent I have ever done. The exposure isn’t really visible. The rock was extremely crumbly, so crumbly in fact that placing bolts or pitons was impossible. Notice the hammer/pick Mike has. The rock was so soft that the only way to place any “protection” was to chip a small hole in the rock and place a hook/or bolt in it. That isn’t to say to tighten a bolt in, but to simply set it in for “psychological protection”. Very bad rock!!! In a normal situation, I would never suggest such climbing methods, both for environmental and safety reasons.

This exit was our last resort and we were trapped. It was mid-August in the desert, we were out of water long before, and if we didn’t escape, we would die. If we fell off the route would probably die. It’s still better to take an if and probably over a would any day.

I was utterly wasted by the time we reached this section of the route, and very dehydrated, and had heat cramps, so Mike did all of the leading and most of the work. By the time I reached the rim, I collapsed, utterly exhausted, and drank almost a gallon of water. I will never forget that day.
« PREV NEXT »

A short story and a cool photo, glad you made it ok Scott!

...many a friction climb will look like a class 3 walk up from afar till you get face to face with it and see that it's 10+ ;)