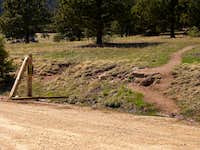 This is the main route to the top of 9,355 ft Kruger Rock. The trail is new, having been laid out and built in 2008 in Larmier County’s newly opened, Hermit Park Open Space. Following the scenic rather than a more direct route to the summit, this well planned and excellently constructed trail offers spectacular panoramas of Mount Meeker, Longs Peak, the Continental Divide and the Mummy Range. A moderate hike of about two miles, a little over 900 ft in elevation gain, along with a short, easy class three scramble gets you to the summit. The view makes it well worth the effort. 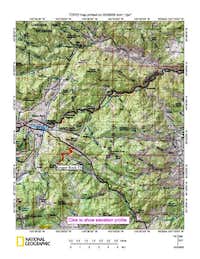 The Trailhead is located in the Hermit Park Open Space, a few miles southeast of the Town of Estes Park.

From Lyons via Hwy 36:
Turn right onto West Main Street onto US Hwy 36 W. Continue on Hwy 36 W for 16.7 miles. The entrance to Hermit Park is on your left.

From the Hermit Park entrance, drive approximately 2 miles to the trailhead parking area, which will be on your left. 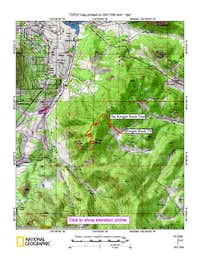 The Kruger Rock Trail starts in Hermit Park at approximately 8,440 ft and winds along it’s two mile course to the 9,355 foot summit of Kruger Rock.
The trail climbs gradually up an open hillside in a northwesterly direction through scattered aspens. Turning to the north, it crests a saddle at just below 8,800 ft, where the first views of the Mummy Range loom to the NW. A short descent follows the ridge to the SW, keeping the Mummy Range in view.

A southward drift around the 8,800 ft knob recrosses the ridge and leads to another short descent before turning westward and climbing more steeply to 9,000 ft. Here the trail flattens somewhat, heading SW along the mountainside. The Longs Peak/ Mount Meeker massif comes into view as do the peaks of the Continental Divide north of Longs.

Turning south and then eastward, switchbacks climb the last 120 ft to the base of the rock at 9,300. From the base, scramble northward up the notch that splits the rock to the fairly flat, “user friendly” summit.

A camera, an ample supply of water and regular hiking gear is all that’s needed. This is a “dry hike”, meaning there’s no water available along the trail. The climb up the “notch” is short and relatively easy but does involve using some hand holds.

The Mummy Range from the Kruger Rock Trail.

While the trail starts in Hermit Park, the second half of the trail and Kruger Rock are in Roosevelt NF. Hermit Park Open Space daily permits are $6 per vehicle per day. Season passes are also available.