The Ślęża Massif - A note about forests

The Ślęża Massif - A note about forests

Forests are the last help for Green Planet

The Ślęża Massif is an isolated forest island in the Silesian Lowland between Wrocław and the Sudetes, SW Poland. It consists of several mountains, the highest of which is Ślęża, and the southern elevation arc with Kiełczyn Hills from the west and Oleszna Hills with Radunia Mt. from the east. On the southern side, the Massif contacts the Krzyżowe Hills. The Ślęża Massif, the Kiełczyn Hills and the Krzyżowe Hills are protected Natura 2000 areas. The forests of the Ślęża Massif grow on four types of rocky ground, i.e. on rocks of the ophiolite complex: gabbro forming the main core of the Ślęża Mt., amphibolites of the Wieżyca Mt., the serpentine hills of the Kiełczyn and Oleszna Hills with the Radunia Mt., and on granites, younger than the ophiolite complex, occurring in the NW part of the Ślęża Mt.The forests of the Massif are formed mainly of spruce, pine, beech, oak, larch, to a lesser extent of maple, lime, Douglas fir, birch and fir. Some species, such as beech, spruce, oak, larch, Douglas fir, are also represented by old, over 100 years old specimens. The forests of the Massif, as in other parts of Poland, were attacked by bark beetle. This beetle destroyed most of the spruce plantations established after World War II. Dry and dead spruces were mostly cut down and their wood was removed from the Massif. Forests growing on the serpentine ground of Radunia Mt. and the adjacent hills were particularly affected. Douglas fir trees planted there before World War II by German foresters are completely healthy and spread spontaneously. Some specimens of this species are impressive. In the Ślęza Massif, there is a mass cutting of coniferous forests, in the vast majority of spruces. This practice worried people wandering there. Here is one of the statements on this topic posted in Gazeta Wrocławska on 3 October 2018Hello,I would like to ask you to publicize the barbaric tree felling that is taking place in Ślęża. Two harvesters work there, cutting down entire hectares of forests to zero. Around the hiking trails there are thousands of trees prepared for export. Beautiful trails are destroyed by heavy equipment.According to an answer of foresters managing this area in the press, damaged spruce forests through drought and then by bark beetle will be replaced by plantings of beech, sessile oak, fir and pine, species more resistant to drought in a given habitat.Thus, foresters are aware of the threat to forests due to repeated droughts and usefulness of deciduous forests in the massif.The exposed surfaces after cutting out of trees are occupied by grasses, birch and invasive locust trees. In some places spruces are planted again.

The question arises: Is the reconstruction of forests in the Massif also favored by cutting out deciduous trees, beeches, oaks, lindens? Almost all species growing there are cut down (see attached pictures). To what extent the forests of the Massif, the area of the Landscape Park and Natura 2000, are cut out, can be proven by the attached Google satellite maps. At present, these forests resemble a sieve. This means a significant reduction in the water retention potential of the Massif region. In the Massif, many streams carry water only in spring, these are periodic watercourses. Some of them have water throughout the year. While wandering many times in the massif and documenting the state of its natural environment, I observed only one (!) old wooden watergate on the western slope of Ślęza, about 50 cm high, protecting against washing of rock rubble. The watergate was sealed naturally with organic deposits and also retains some water. This construction from years ago is in a state of decay. At present Polish foresters adopted the noble slogan: "Water for the forests, forests for the water", because they are aware of the water retention potential of forests - forests, not tree plantations, because forests, after felling trees, devastation of undergrowth, litter and forest soil are no longer forests! I repeat, the Massif’s trees suffer from drought and foresters know this. So another question arises: What was done for water retention in the Ślęża Massif? My answer is: Nothing. The above slogan remains an empty phrase. In ancient times, Ślęża was called the Saint Mount, covered by magnificent forests and powerful trees. Today, due to our activity, it may remain only a rocky mound. Due to the current climate dynamics, activity of foresters should be directed at maximum forest protection and not at maximum logging. 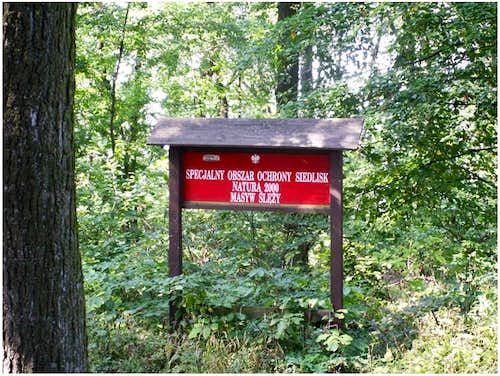 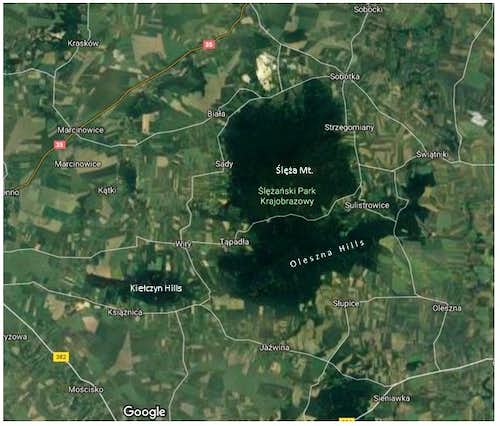