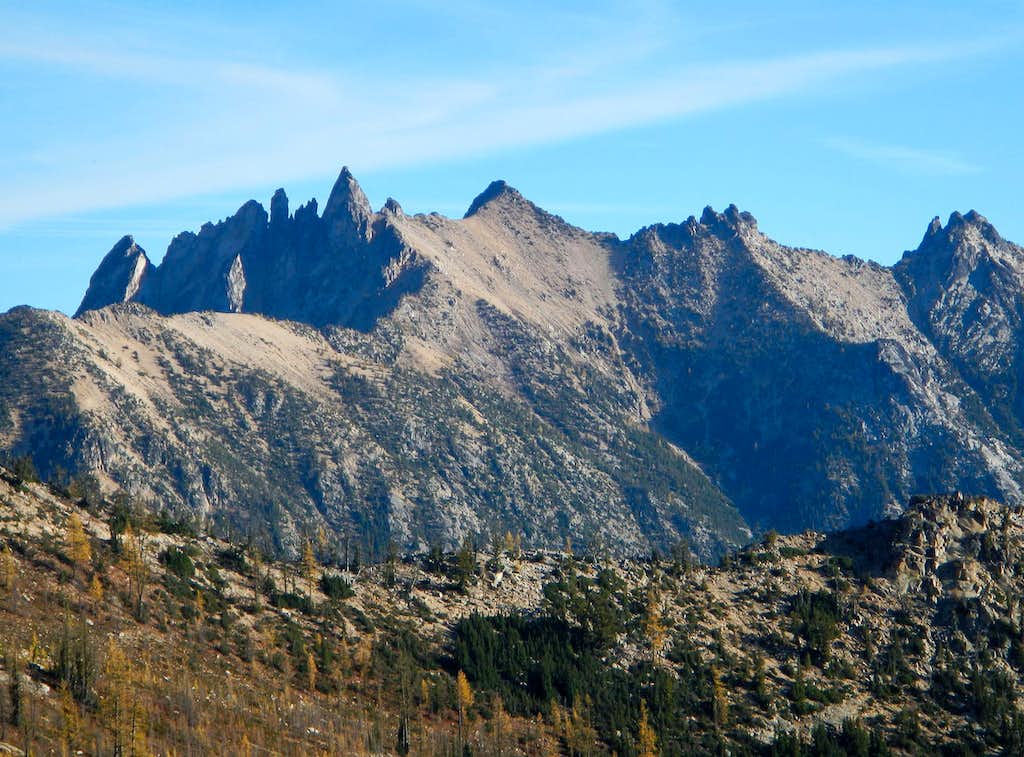 The Needles
The Needles is a prominent ridge of spires, 13 miles west of Mazama Washington. The ridge extends west to Tower Mountain and east to Delancy Ridge. The main peak, endowed with 1759 feet of prominence, stands 250 feet above the ridge. The Needles was first climbed in September of 1944 by Helmy Beckey and Larry Strathdee. Since then it has seen relatively few ascents considering the popularity of the Washington Pass area. The smaller western spires have only been climbed a handful of times and several of them are rumored to have 5.10 routes. 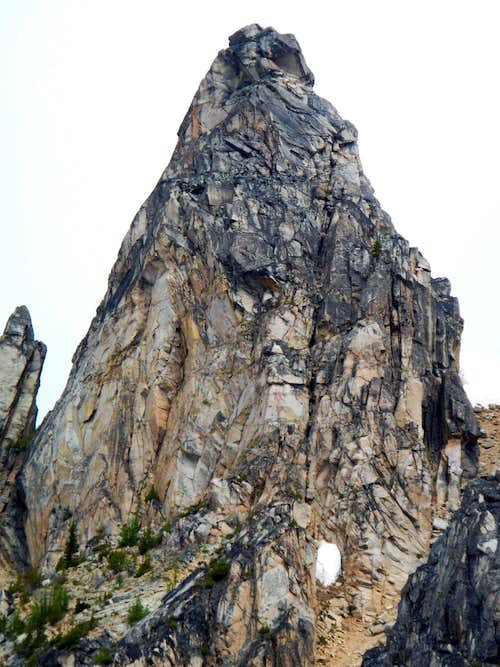 Summit Pinnacle
The Needles is somewhat remote despite it's proximity to the highway. There is no official trail access for the approach and reaching the true summit requires two pitches of 5.5-5.7 climbing. It should be made clear that the USGS has wrongly labeled the east peak as the highest. This is slightly amusing considering that The Needle, also located in Washington is mislabeled in much the same way. 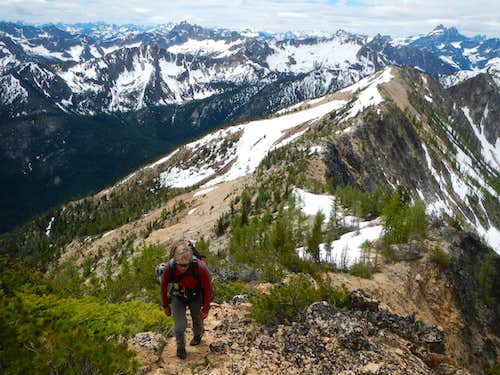 The Southwest Ridge
Hikers who wish to visit this peak, but lack technical ability are encouraged to go to the east peak which is roughly 10 feet lower than the main summit and has views which are just as good. A small register was placed there in July of 2014. The east peak requires only 3rd class scrambling. 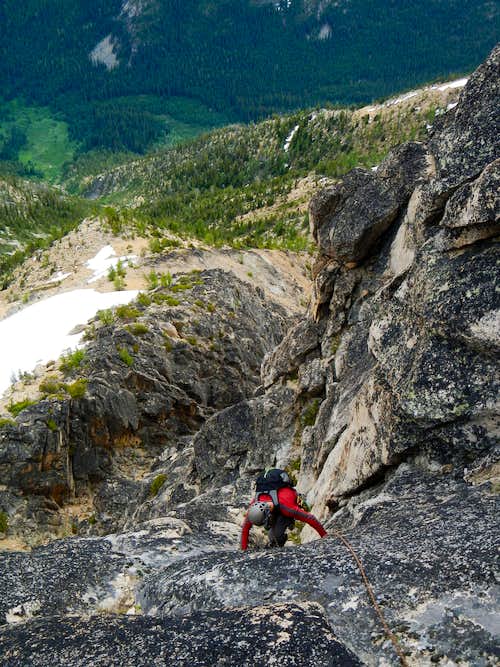 Climbing The Pinnacle
Despite the fact that no official trail exists and none are shown on maps, an abandoned trail does exist and can be found easily after a little searching. Without this trail, climbing The Needles would be considerably more difficult due to thick brush and might take more than a single day. See the route description for more information.

This route gains 4200 feet in 2.7 miles.  Here is a printable route map.  Access begins along the south side of Pine Creek. Park at one of the pullouts near Pine Creek (just south of Lone Fir campground). The abandoned trail starts roughly 400 south of the creek. Don't bother trying to find the start of it because it is not visible from the road. Just enter the forest and proceed in a westerly direction until you come upon it. The trail follows the south side of the creek ranging between 50 and 150 meters distant from the watercourse. Once discovered, it is easy to discern all the way to the crossing. 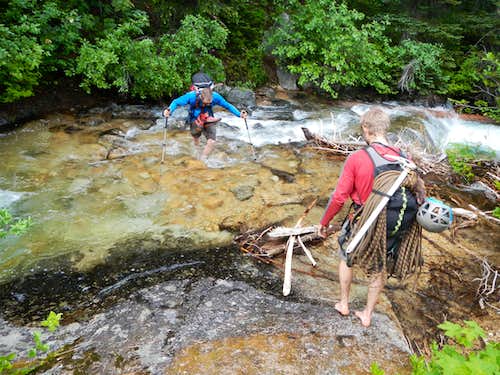 Pine Creek Crossing
After a mile the trail comes to an end at the south bank of Pine Creek. Ford the creek and continue east , soon passing the remnants of a hunters camp. Beyond the camp the forest opens up into open meadows with some thick swaths of slide alder covering small streams. Game trails can be used to cross through the slide alder. After passing the thickest of the slide alder and brush, turn northwest and make an ascending traverse to reach the northwest edge of the open meadow. The meadow seems to be a favored bear haven. Keep your eyes open. 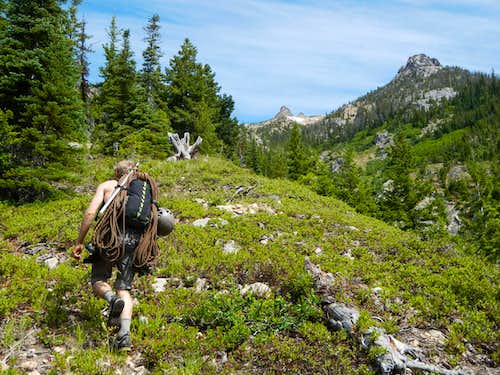 Lower South Rib
At the upper western end of the meadow, cross a larger deeper stream bed. You should be able to look up this gully towards the summit pinnacle. Once on the west side of this stream which comes down from below the east peak, ascend north along a sort of rib through partial tree cover. Without snow cover, the dirt and scree is loose in places. 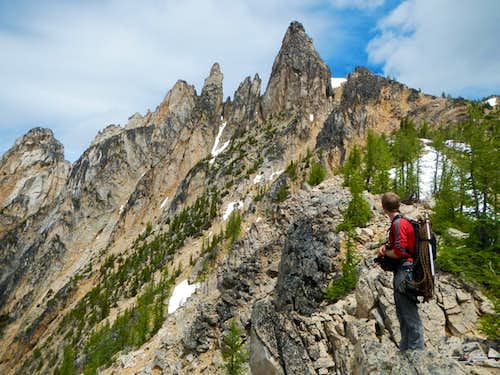 On The Southwest Ridge
At 5700 feet the rib becomes open slabs. These can be avoided along the left (west) side. Above the slabs, continue to ascend the rib to 6800 feet where it turns more to the west. Leave the rib and make an ascending traverse to reach the small basin at 7040 feet. Then climb more loose scree north out of the basin and traverse north to reach the crest of the southwest ridge. 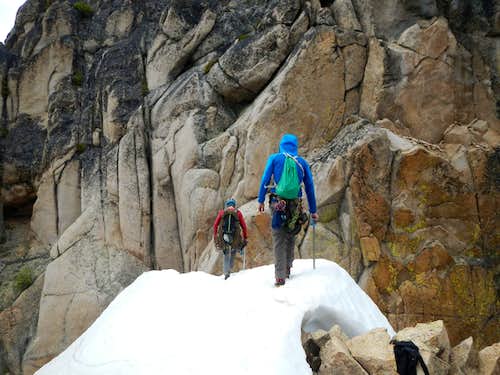 Approaching The Moat
Follow the southwest ridge north and then traverse along under the southeast face of the summit until you reach the notch. Snow lingers here late in the season and there may be a moat at the start of the climb.

Cross from one side of the notch along the top of a snow ridge, towards the face. There is some exposure in the notch, to the north. After the month of May, there could be a moat here. If so, the crux of the route might just be getting into or out of the moat. 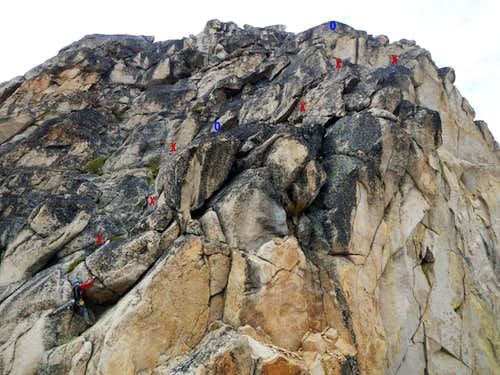 Standard Southeast Route
The rock at the base of the face is steeper, has less features and tends to be more crumbly. The granite is of the large grain variety and is less solid at the bottom. After the first few moves which feel like 5.7, most of the climbing is 4th class. The only other real technical spot is the 20 foot lie-back inside an open book on the second pitch. 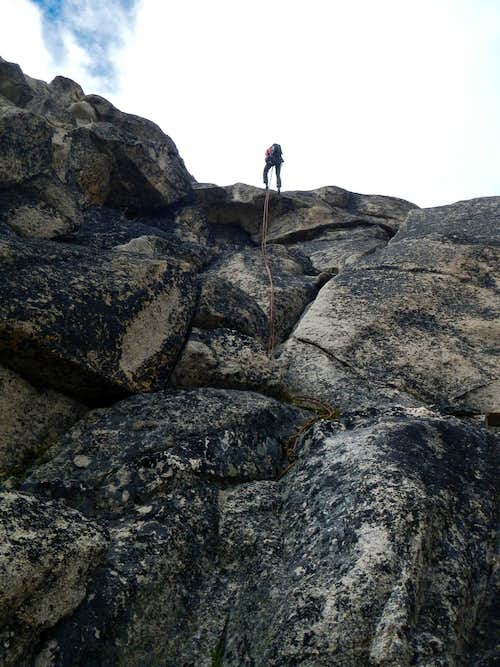 On Rappel
There are two obvious rappel stations on the face and another up on the ridge near the summit. A light alpine rack and 60 meter rope is all you need.

Traverse east below the main peak passing a subsidiary point on the ridge.  200 meters east of the main peak, follow the ridge north to reach the east peak.  Much of it is class 2 but there is one difficult move getting around a steep section, just left of the crest. 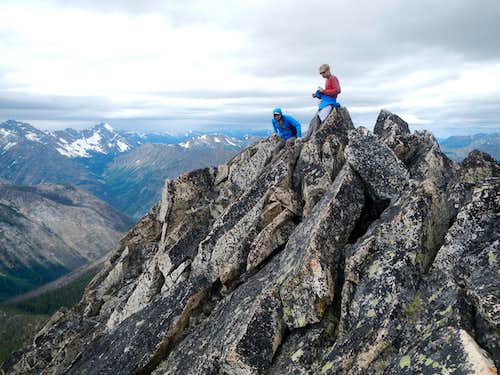 On The East Peak

Drive Highway 20 to Lone Fir campground, 11.5 miles west of Mazama. Park in a pullout on the side of the highway near Pine Creek, south of the campground. 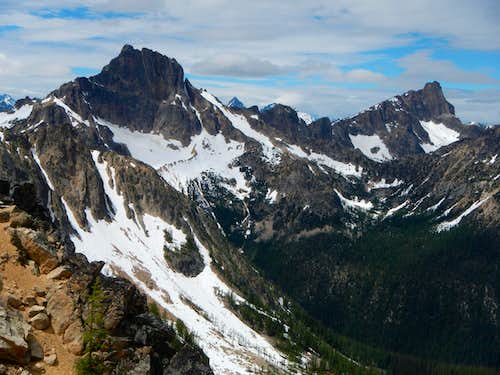 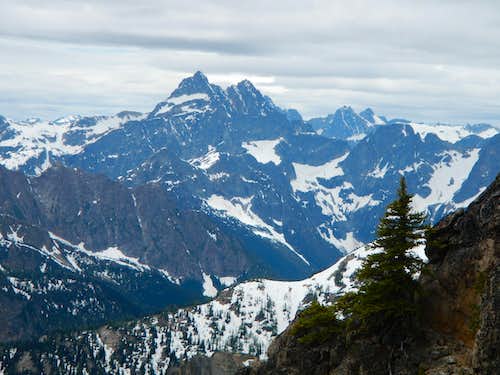 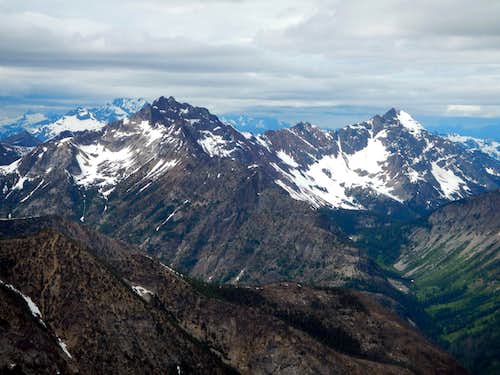