The Ovens is a small sport climbing wall a few miles outside Red Lodge, Montana boasting five single pitch routes on a limestone fin seconds away from the Ski Run Road (which heads up to Red Lodge Mountain Ski Resort). One notable feature about the Beartooth Mountains is the vertically dipping limestone fins that circle the lower flanks of the range to the east and north sides. This occurred when the uplift of the Beartooth Core pushed the overlaying limestone and other sedimentary rocks upwards. These softer rocks quickly began to erode away and due to the tilting nature of the Beartooth uplift (with the north and eastern flanks having a steeper uplift) the overlaying limestone beds buckled down and fell leaving the once horizontal beds of Limestone now vertical. These fins make great sport climbing all around the flanks of the Beartooths. In no way will I describe all the areas because there are some sections that haven't even seen climbers yet!

The Ovens is a popular local crag though and it has it's place here. Locals with an hour or two of spare time will come here for a quick climb to keep their climb on or to teach someone new to climbing since it's very accessible and well bolted. All the routes can also be set up with a top rope as there is a trail heading around the wall to the right side and in between the upper fin off to the right (which doesn't have any routes) and gives easy access to the top. It's called "The Ovens" because it faces east and the hot morning and early afternoon sun bakes the area relentlessly. The best time to come here is later in the afternoon when the rock is in the shade.

From Red Lodge, Montana drive to the south end of town and turn west onto the West Fork Rock Creek Road (also the Ski Run Road). There is a huge black sign for the Red Lodge SKi Mountain. Drive this good paved road for 3 miles to the intersection with the gravel Ski Run Road which continues around to the right and the paved West Fork Road which continues to the left. Park at this intersection alongside the road and locate the limestone fin 100 yards to the west. There is a trail heading through the grass to the base of the wall which takes about 3 minutes to hike. Once at the base of the 65 foot tall limestone wall you will notice 5 bolted routes. I'll describe them from right to left as this is the order you will see them upon reaching the wall. The crux of every one of the routes is about halfway up the wall where there is 10 foot overhang or purely vertical section stretching nearly the entire way across. 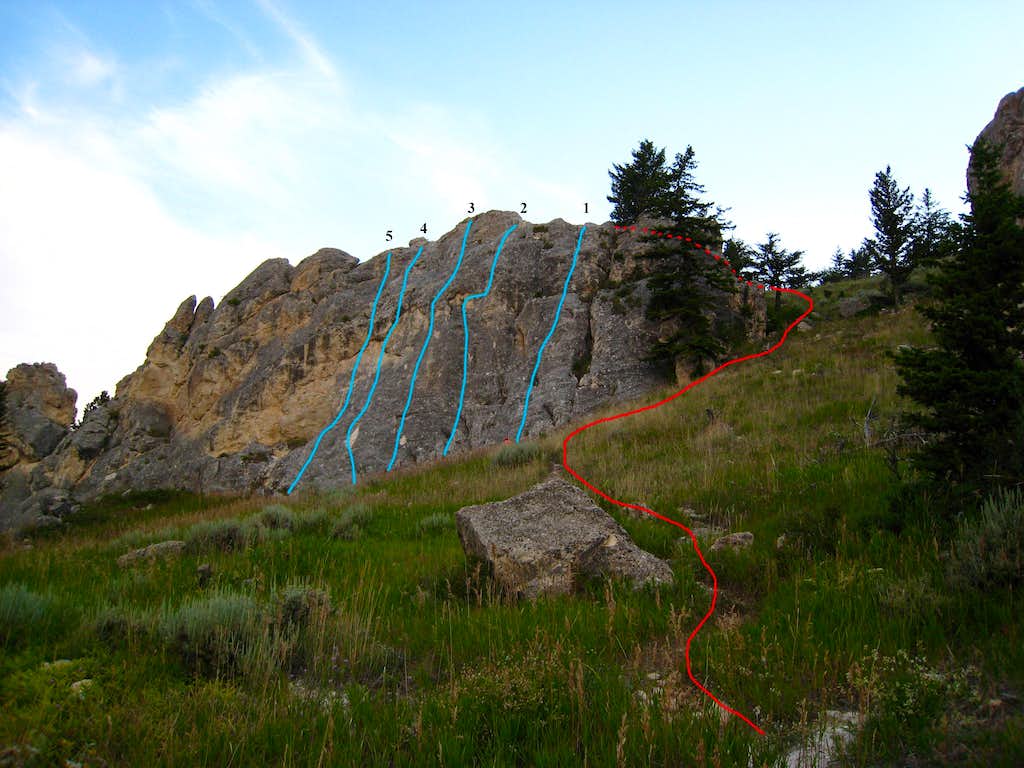 Overview of The Ovens with the blue lines showing the routes and the red line showing the trail leading around to the top.

None! Do not block the Ski Run Road with your car when you park.

Any time of year. Winter in Red Lodge does have some warmer sunny days but everyone in Montana is ice climbing in winter. Summer mornings are hot here.