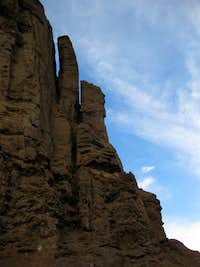 Along the North Fork of the Shoshone River, which President Theodore Roosevelt once declared to be America’s most scenic drive, there are numerous rugged volcanic outcrops and hoodoos that burn an intense red in the light of early morning and late afternoon. Perhaps the largest and most spectacular collection of these is at Holy City, a little over two miles west of the Shoshone National Forest boundary. I could probably spend hours scrambling around and exploring in there, but there is a catch-- it is on the other side of the river, and most of the year, the North Fork is big water and dangerous (or impossible) to ford except perhaps in late summer. The nearest bridges are several miles away, far enough to preclude any attempts to access the site via the bridges (and aside from negotiating difficult terrain, there may be issues with private property as well).

Actually, the majority of the named rock formations are on the “wrong” side of the river.

A much more accessible site is Chimney Rock, but the catch to that is it is a single small pinnacle. Unless you want to climb 5.8 on sketchy rock, all you can do is look at it.

But you do have the Palisades, not far east of Chimney Rock. Here, tall, sheer cliffs and pinnacles abut the road for approximately half a mile as it follows a prominent bend in the river. Some of the cliffs and spires rise almost 400’ above the river. 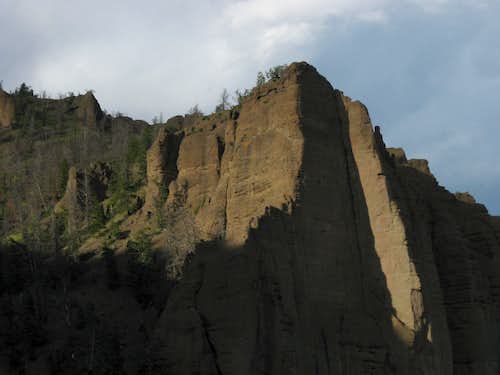 Challenging scrambling awaits here. Just the approach to the rocks, though short, is extremely steep, often with loose, gravel-like footing. The rock itself is at once both slick and brittle. The tops of the formations are all but inaccessible to scramblers, but there are one or two horrendously steep gullies that provide access to some of the summits. To make matters worse, they have trees in parts of them, throwing some obstacles in for good measure, but maybe that is a good thing, for the gullies are so steep, with footing so bad, that you may decide to dispense with pride and use the trees as holds. Once up top, you find that the land rises to the north for what seems like forever, and you could spend hours or days wandering the trailless country up there. 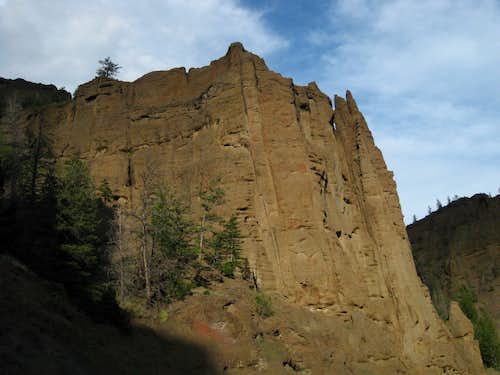 It may not sound like that much fun, but the cliffs and surrounding scenery are beautiful (you get improved views of high Absaroka summits up there), and the Palisades make a good destination if you need to kill a couple of hours, want something to do in seasons when snow makes the high peaks difficult to access, or would like an “off day” between bigger climbs. 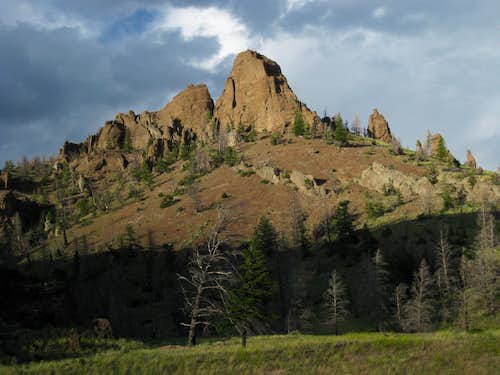 One look at the cliffs will reveal all kinds of possibilities for technical climbs up to three pitches. And I know of no restrictions against rock climbing out here other than prohibitions on installing new bolts where they did not previously exist. However, I have had no success googling for climbing information or checking on rockclimbing.com. Be aware that the climbing here is on breccia, a volcanic rock that in the Absaroka Range can be very brittle. The cliffs here look pretty good as far as Absaroka breccia goes, but there is no telling what will happen to a cam set in a crack once some pressure is applied. With the lack of readily available information on the technical climbing here, it is advisable to spend some time testing the rock lower down or maybe doing some top roping first (though that involves the joys of scrambling up to the higher areas).

Note: There is another area called the Palisades nearby. It is on the western side of Rattlesnake Mountain, several miles east. This page covers the Palisades on the USGS Chimney Rock quad. 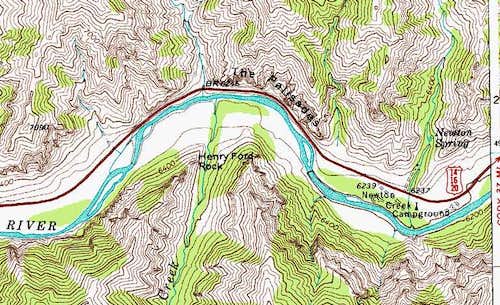 Why are there no pictures from up top? When I played around out here, it was near sunset (which reminds me-- the mosquitoes were ferocious at that time of day), it was cloudy (as some of the pictures here suggest), and the good light was gone, so I did not take any pictures, which would have come out either way too dark or way too bright, depending on how I tried to deal with the poor light. I was lucky to get the roadside shots I did before all the good light vanished.

On the other hand, now you can go out and “discover” the views yourself.

The Palisades are between the East Entrance of Yellowstone National Park and Cody, about a mile west of the Blackwater Fire Memorial, which commemorates the firefighters that died trying to combat a ferocious wildfire. This is about 34 miles west of Cody. There is no formal parking area, and there is no sign marking the Palisades, but there are some parking areas along the road here, and anyone with a map showing the Palisades should have no trouble at all finding them.

No red tape except one big thing-- stop at the Wapiti Ranger Station or check online at the Shoshone National Forest site for the regulations related to bears, especially grizzlies, which are frequently seen even from the road out here.

The road is open all year to Yellowstone but may temporarily close due to weather conditions. In summer, expect road construction delays.

The closest campground is Newton Creek, less than a mile east. Sites are first-come, first-served. Two miles east is Rex Hale Campground, and you can reserve sites at recreation.gov. These campgrounds are nice, with several sites along the river. Bearproof storage containers are provided, and you must keep all food and other “odor items” in them or inside a closed vehicle (if you have a convertible, use the trunk even if the top is up).

If I recall correctly, camping along the North Fork is permitted only in established campgrounds in order to protect both people and bears better.