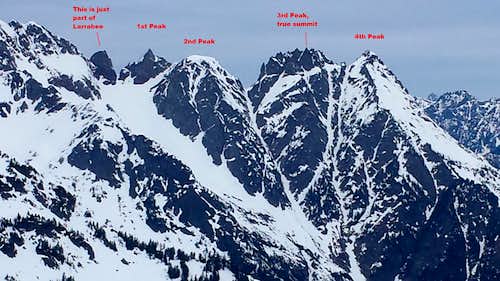 The Pleiades are a group of peaks on an arm of Larrabee extending to the east. There are four distinct peaks in the group with the 3rd from the west being considered the tallest. All four peaks are reportedly 3rd class scrambles although loose rock makes them more challenging mentally. None of the peaks are frequently climbed though I can’t comment as to why. In the summer the approach is fairly short and the rock is just as bad if not worse on Larrabee, and plenty of people climb that mountain.

The Pleiades (as mentioned in the comments) are the location and cause of the demise of notable local climber Dallas Kloke (of Mt. Erie fame among other things).

The peaks also seem to have a special significance for some people in a spiritual way (more so than most mountains that is). In addition many people reportedly have UFO experiences in the area.

Take Mt. Baker Highway to Twin Lakes Road #3065 as far as you can. The road ends at the lakes at 7 miles but the road is frequently impassable at 4.5 miles due to snow or washouts.

I have intentionally left this section sparse as I feel the alpine traveler in this particular area should find his or her own way to an extent; if every climb had painted arrows leading the way, ladders over the difficulties, and a cafe at the top there would be no point in leaving home.

From the finger of land between the lakes follow the High Pass trail to the north and NW all the way to High Pass. When the trail is snow covered it’s best to stick as close to it as possible to avoid getting cliffed out (trust me, I know).

From High Pass ascend the scree or snow slope NNE to the col in the S arm of Larrabee (a trail in summer). From the col descent slightly and traverse the basin; climb the gully to the notch between the 1st and 2nd Pleiades.

From the notch the 2nd peak is an easy scramble to the east. The 1st peak (to the west) should be a 3rd class scramble (though when I was there in winter it was a scary looking snowy knife-edge and slabby death-exposure in summer). No one seems to have done the 1st peak and written about it.


Descend #2 to the east,we found a descent gully and didn't need to rap to get to the notch. This was not the hardest down-climbing on the route. We went toward the notch as far as you can walk, then looked right and found a black-lichen-covered rocky gully. From the notch ascend to the goat ledge and traverse the ledge. If you are looking to go to #4 traverse the ledge all the way and scramble east to the top. The 3rd peak is the highest. For#3 there appear to be several options but the consensus is generally to look for a viable route just over halfway along the goat ledge. The true summit is somewhere in the middle of the grouping so just look for a gully that is climbable, there will probably be some trial and error. In the fall we nailed it thanks to reading a TR online.

A Forest Pass is required to park anywhere from Yellow Aster Trailhead on.


Whenever... we did it in winter and it negated a lot of scree. Obviously summer presents fewer issues overall.


Here are a couple of really comprehensive trip reports with some additional beta.
http://www.nwhikers.net/forums/viewtopic.php?p=931481


Nothing in the fall. If you need a rope you will have to bring webbing too. Obviously there is snow a lot and steep slopes.

The "The" should be placed in front of this name. The Pleiades. This is the mountain that claimed the life of well-known climber/skier/guidebook author Dallas Kloke in 2010: article