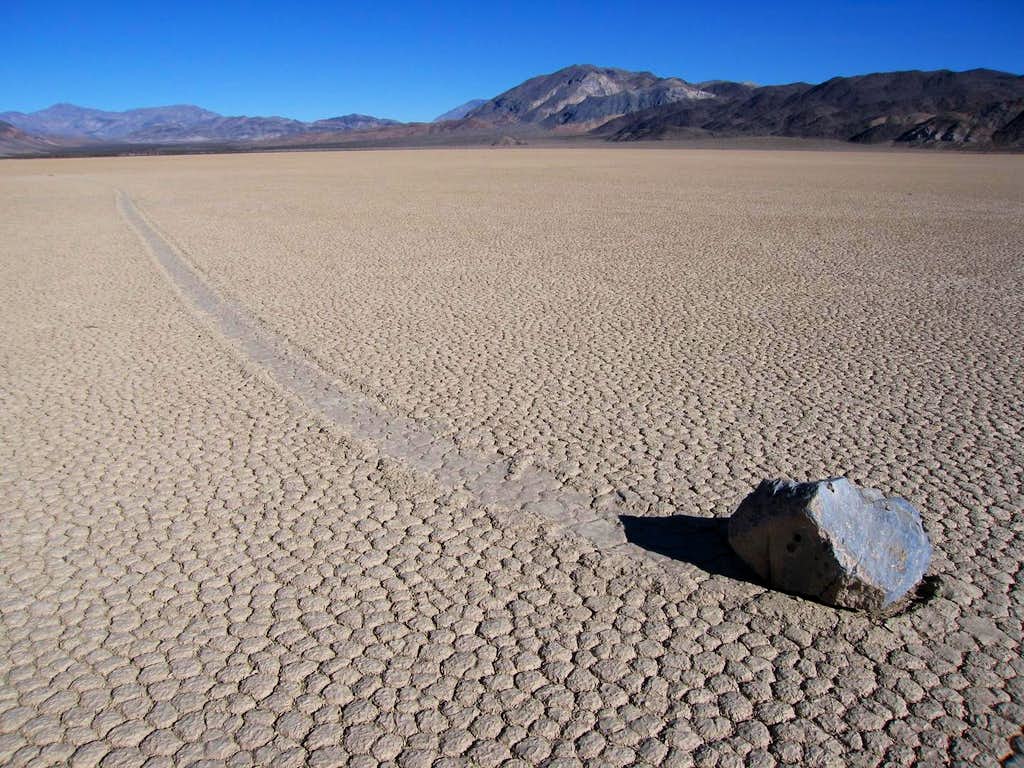 One of the famous moving stones found at the Racetrack Playa in Death Valley. Tin Mountain is in the background on the far left. November 2005 How this occurs is not entirely understood. The rocks fall onto the playa from cliffs near the south end. From there it is believed under the right conditions (maybe it is when the playa is wet and slippery, or has the right amount of ice mixed in) the wind then blows the rocks around. Still- the tracks are not all parallel- some of them heading in wildly different directions, some straight, and some curved. When I was there in 2009 it was cold and very windy- but the playa was dry- those rocks weren't going anywhere. Please see the following excellent explanation from FortMental: "It was calculated that a wind speed of 480mph was required to move such a rock over slippery mud. Ironically, the reality of these tracks is pretty mundane. All that's needed is a precise set of conditions to create such tracks: winter, precipitation, and wind. The playa is submerged in enough water to surround these rocks. The water freezes to a depth of several inches. Additional water comes in and raises the ice AND the ice-locked rocks. A light breeze is all that is required to blow the ice around and drag the rock 'keels' through the soft mud, creating tracks. The water then evaporates leaving behind mud tracks and mystified humans. This theory explains ALL track phenomenon and was made based on direct observation back in the 1920s and published in a respectable journal. But nobody pays attention to old guys anymore. Not even the NPS which still promulgates a "mysterious" reason for these tracks."
« PREV NEXT »

I remember seeing a photo of this somewhere else...

...and I found it quite striking! How does this sort of phenomenon occur?

Re: I remember seeing a photo of this somewhere else...

Thanks for the vote- and I've added some explanation to the text...

Re: I remember seeing a photo of this somewhere else...

Thanks! I read it just now. Interesting...and apparently not yet fully explained, this sort of thing...

the Loch Ness Monster has something to do with this phenomena.

The power of nature...

How big is the rock in this picture?

They were all sizes. Have another photo of this same rock with me in it though. This one is at least a foot and a half across. Pretty decent sized chuck. A lot heavier than you'd think would be able to slide around.

Thanks Mountain_girl, worth a visit when you get the chance, and the season is coming up!

Haha... Thanks Baarb. I put his comment in the caption now, just to be more certain other might read it.