The Rock of Gibraltar

The Rock of Gibraltar 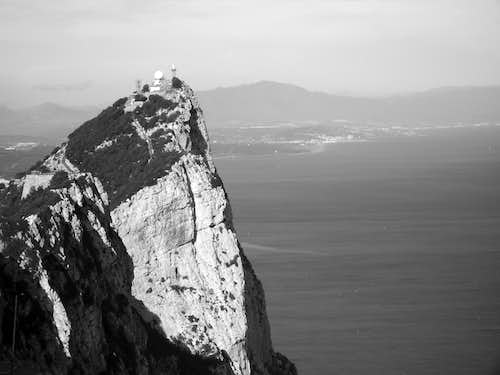 
This Natural Land Feature has Status, Shape and History.

Gibraltar as it goe's is only a small Dependent area of land that belong's to the United Kingdom and is about 6.5km square to be precise including both the city and The Rock itself.

The Rock of Gibraltar is a world famous natural land feature that guards the Straits of Gibraltar from the Atlantic to the Mediterranean Sea.
The Rock has played a massive roll in UK Military History and The Rock is still part of the United Kingdom today. At the hate of the Spanish...

The Rock of Gibraltar is a hard mass of Limestone and is only 426-metres high but it rises in a gentle but steep angle from its West side up to the Main Ridge and then falls with shear cliff's on its Eastern face.

On the clearest of days the views into Spain are extensive and the Morroco coast of North Africa is also clearly visible.
The ridge also commands fine views down into the tiny area of Gibraltar itself showing the Airport, City, its Military bases and much more...

The roads up to The Rock go through the country park where a small fee is required for the nature reserve. You do not have to pay this fee if you have Military Connections with Work...! But the fees are there to keep the country looked after and tidy.

Beware in the country park are of the local Gibraltar Apes. They can be tame and quite inquisitive in that if they think you have got food or anything that may interest them. They will grab it... They also when annoyed Bite and its painful as i found out when one thought my rolled up orange fleece in a bag was a treat. Ouch...!

What Gibraltar is and how to Get There

Gibraltar is a very small peninsular of land with its own Airport.
The Airport operates Civil, Private and Military flights.

Flights from the Uk to Gibraltar airport are only available from London Gatwick and London Luton airports.
I also believe if flying from another Country you still have to go via London Gatwick or Luton so as to get a Gibraltar flight...?

The city of Gibraltar has only one road linking it to Spain. This road is not classified a number but comes from the Spanish town of La Linea. The road crosses the border then passes the airport and then crosses the runway into the city.

The MOD and Air Ministry own a fair amount of land on The Rock.
They also own alot of the coastal areas and docks.

MOD and Air Ministry signs are everywhere over The Rock of Gibraltar.
The sections of The Rock that command the finest of views and have the steepest of cliffs are all owned by MOD Air Ministry and the rules about trespassing in this area for the MOD are strict.

THE BAD NEWS IS...
Concerning my page about climbing. The area of cliffs to my knowledge cannot be climbed which is a shame as the cliffs look to me like they cry out for that sort of attention. The main probleb as stated before in that the area is swarmed with MOD and Air Ministry land... The best way of walking the area is just by following the roads up through the country park that take you through the beautiful landscape of this fine landmark and thats all i can say.

Gibraltar as a City

Gibraltar has a number of hotels that all have good service.
My favourite was the Catalen Bay Hotel that has fine views across the water up North towards Spain and has great views of The Rock itself.

The city itself has a very unusual high street in that when i was there i found it alot like a Uk high street with all our Uk style shops bars and restuarents. Electrical shops for Digital Technology such as cameras and computers are really expensive when Alcahol and Tabacco are cheap...! LOL.

Its a nice city though and has a great bit of its own history some lovely castle walls a Cathedral and the area under The Rock is smothered with Tunnels and passeges from back in the war time days.