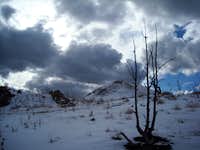 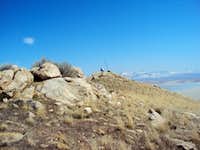 The Sentry's Summit
The Sentry, on the southern part of Antelope Island, is a 5,546 feet high knob located in the center of the ridgeline between Frary Peak and Molly’s Nipple. You can spot it easily from the highway as it stands alone in the middle of the southern ridge. The Sentry is a non-technical 7-mile round trip hike up a treeless hillside with most of the trip following a double-track trail. The final climb is a short but steep 200-yard scramble up to peak. The Sentry and the southern part of Antelope Island has been closed to public for over a hundred years and only recently re-opened in 2005. The top of The Sentry is marked by a derelict flag pole bent 45 degrees askew and mounted in the rock crag. From the top, you are rewarded with an outstanding panorama of the Great Salt Lake, Oquirrh Mountains to the south, the Wasatch Mountains to the East, Frary Peak to the north, and Grassy/Newfoundland Mountains to the West. The terrain around The Sentry is dry Great-Plains-like grasslands populated by bison, antelope and deer. It is a unique view and very different than the usual Utah experience. HIKE INFO From Lists Of John Elevation: 5,446' County: Davis Quad: Antelope Island Coords: 40.91695,-112.197812 Rise: 216' Saddle: 5,230' Trailhead Location: 40.926516,-112.168694 Round Trip Distance: ~7 miles Round Trip Time: ~ 4 hours Trailhead to Summit Elevation Gain: ~1,150 feet Difficulty: YDS Class 1 with 200 yards of steep but easy scrambling . 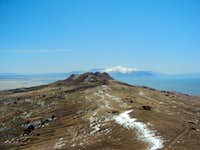 View from Sentry
*note: during spring/summer/fall there is a trail head  a half mile down the dirt road that is open .  They close the gate on the dirt road  during the winter  so  hikers need to start  from the Ranch some times during the year. 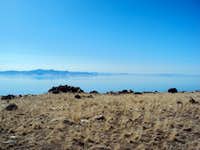 Single Track Near Sentry
The trail starts south of the Garr Fielding Ranch on a dirt road. A couple of signs early in the hike give trail info. A half mile down the road, there is a junction where the trail either continues south (to the end of the island) or turns west toward Sentry Peak. You should be able to spot The Sentry as it the pyramid shaped hill standing all by itself on the ridgeline. After the trail turns generally west, it steadily climbs up the side of the hill with some zig-zags. You should still be on double track trail. Near the top, the trail splits left or right; either is correct because the trail loops. Follow the trail up to the ridgeline. At the ridgeline (on either side of The Sentry) there are picnic tables and horse hitches. The trail loop around The Sentry departs from the double track at the picnic table and runs along the western base of the final hill. To climb The Sentry, pick your best route (I went up the Southwest Corner) and ascend the 200 yards to the top. Step as gentle as possible and try not to disturb or tear up the hillside. Your primary hazards on the route are terrain, routing, micro-fauna and mega-fauna. Keep in mind, Antelope Island is on the edge of the western desert. The terrain is absolutely treeless the entire route and, during the summer, it gets uncomfortably hot. You need to bring water, sunscreen and wear long sleeves for sun protection. The route is pretty straight forward except the route markers keep getting knocked down by the buffalo. Keep your eyes open for markers laying in the grass. There is an abundance of microfauna (known collectively as “bugs”) infesting Antelope Island. They swarm, they bite, they get ingested into random bodily orifices. Either load up on DEET or visit the island after October or before May. Finally, there is a herd of buffalo on the island. They are big and they can hurt you. They also get to all points along the hike including Sentry’s summit. Buffalo may look slow, but they can run like the wind and will gore people who are silly enough to get to close. Don’t. 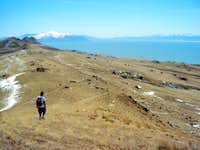 Climbing Down
The Sentry on Antelope Island is open year round. Although visits in from Late-April through Mid-September are usually sub-optimal because of the swarms of biting flies and brutal summer heat on the dry, treeless terrain. Trust me, there are better places to go in Utah during the summer! The best times to tour the Island and attempt any of the island peaks are in the late fall, early spring and winter when the crowds are sparse and the flies in hibernation. In addition, there seems to be more animal activity during the day increasing the likelihood of getting that great camera shot. For late fall and early spring visits, you will most likely encounter some light snow on the ground but not anything you’d need special shoes for. The area around the island is great for winter snowshoeing and possibly cross country skiing. 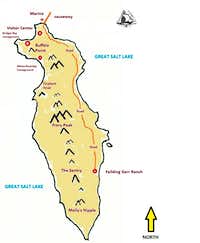 Antelope Island Map
IMONTOP has an excellent Trailhead page of Garr Fielding Ranch Trailhead. The trailhead is located at 40.926516,-112.168694. In general, take exit 332 off I-15, drive west on Antelope Drive through Syracuse toward the Great Salt Lake. Pay the $10 entry fee at the ranger shack to get onto the causeway and into the park. Drive the 7.5 mile causeway across the lake. Once across, you’ll see an Air Force/ Special Forces Memorial and a small Marina. Go left heading South along the west side of the island following the signs to Garr Fielding Ranch. When you run out of road, you’ll see the ranch. Park in the parking lot. Facilities on the island include rest rooms, hot shower rooms, picnic/group shelters, boat launches, marina, cafés, information and a large Visitor Center. Facilities at Garr Fielding Ranch include rest rooms, but there isn’t a water source. Bring your own! The Davis County Causeway from Syracuse to the Island is an interesting piece of construction that has been built, rebuilt and rebuilt again. The 7.5 mile causeway linking the island to the mainland is an earthen dike that was originally built in 1969 and was heavily damaged by the lake’s waves. The state made numerous improvements raising the causeway. Heavy snows and rains in the early 80s raised the lake’s level above the causeways and the road was completely under water. After the state’s drought lowered the lake’s level, the causeway was rebuilt in 1992. A good portion of the “causeway fee” goes toward a fund to rebuild it again if it is destroyed by future floods. 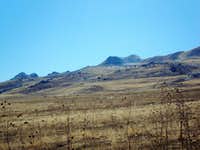 Trail near the Ranch 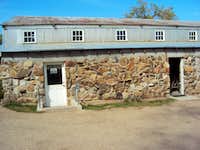 Fielding Garr Ranch Office
RED TAPE Red tape for Antelope Island is fairly extensive and ranges from “no dogs on the trail” to “campfires are prohibited outside of a camping areas”. See the State’s website for detailed information and fees. You are on state land everywhere on the island and the Great State of Utah is determined that Antelope Island will remain a viable, interesting nature preserve for generations to come. Check out the regulations before you visit. CAMPING There are 2 campsites for reservation located on the north part of the island. Bridger Bay Campground is the larger of the two with 26 primitive sites available. The sites include picnic tables, fire pits, and toilets are available. There isn’t, however water or electricity available. No horses are allowed White Rock Bay Campground is smaller with 12 primitive sites. It is similar with picnic tables, fire pits, and toilets are available. Once again, there isn’t water or electricity available. Horses ARE allowed at this site. Reservations may be made by calling Utah State Parks and Recreation, 322-3770 in the Salt Lake City calling area or toll-free 1-800-322-3770, from 8 a.m. to 5 p.m., Monday through Friday. Should you decide to spend a couple of days, Antelope Island is great for running, biking, horseback riding, saltwater swimming, snowshoeing and boating. There are several places to grab a snack (in season) as well as picnic on the island. 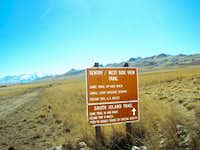 Sign on Route
Antelope Island’s main claim to fame is its herd of 700 free roaming American Bison. These magnificent creatures get to almost every point of the island and are invariably seen standing in herds. They are easily spotted and photographed. The herd is one of the oldest surviving herds in the US as it was spared from the extinction-level bison hunts that wiped out the huge plains herds in the 1880s. Two Utah men brought the animals to island in 1893 and essentially saved the species. As a result the herd’s vitality, the Antelope Island animals are used today to increase the genetic diversity of other free-roaming bison herds across the United States. These beautiful creatures are a vital national ecological resource. In addition to the island’s signature bison, chances are pretty good you might also spot pronghorn antelope, bighorn sheep, coyotes, bobcats and/or mule deer. Since they aren’t hunted, these animals don’t hide as much as usual. The island itself was named after the pronghorn antelope that early explorers converted to rations. The original herd died out in the 1930s but a new herd of 24 was reintroduced in 1993. While summiting the islands peaks, you’ll usually see several species of raptors soaring around the mountainsides. There is also a wide variety of local on the island including Grouse, Chuckars, and California Sea Gulls. During migration season you’ll spot everything from geese and ducks to willets and stilts along the shoreline and in the salt marshes.