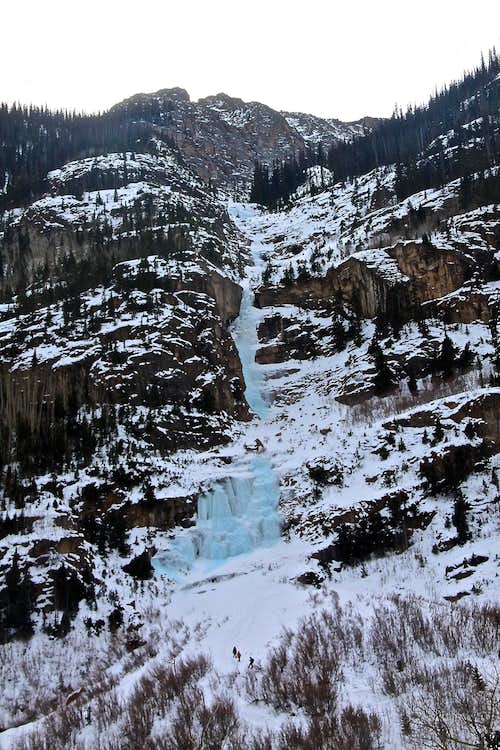 The Sherman Climb WI4 as seen from the approach with descending climbers
The Sherman Climb is a beautiful and reliable ice fall in Lake City area. This is a classic climb, and most likely the best route in the area. It can be either a very long alpine climb or a four pitch water ice climb depending on what sort of experience you are after. The first 750 feet of the gully constitute the most technical climbing. The first pitch is easy WI3, the second pitch either an easy ice or a snow hike, the third pitch is also relatively easy rolling ice WI3, and the crux is on the fourth pitch - a short pillar rated either WI4 or WI5 per different sources and depending on changing conditions. I encountered the 4th pitch at WI4 rating with steps in making it easier although still relatively steep experience.

Above the fourth pitch, the grade nowhere exceeds WI2-3s and is usually less, but you can climb another 800 feet (not recommended) to the summit ridge. The climbing throughout is exposed to extreme avalanche danger. Stay off this climb if there is any question of avalanche danger.

You can check for avalanche conditions here.

If you will want to search for the location of the climb on your map, it is on the northeast slopes of Quarter Peak. Cameron Burns writes in his Colorado Ice Climber's Guide book that it is on the slopes of Half Peak, a high 13er and Centennial peak (among the 100 highest in Colorado, but that is not true. Half Peak is located further south).

Lake city is a small historic mountain town in Colorado. Most of its little population leaves for the winter and only about 22% brave try to survive the long winters. Lake City features a small ice park and a number of back country ice climbs, Sherman being the most popular one. Lake City is referred to as “off beaten path”, it much less crowded than Ouray Ice park and Ouray back country ice. 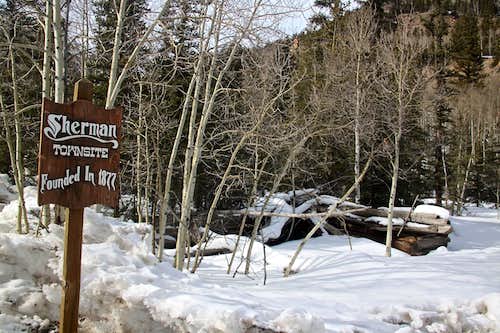 Sherman Town Site
The Sherman Ice Climb is rated in Jack Robert's Colorado Ice book as WI4/5, and Crested Butte Mountain Guides rate it as WI5. I think a more reasonable rating is WI4 (per conditions we encountered), with the 4th pitch being at this rating.

Sherman Ghost Town - the ice climb is named after the ghost town, named Sherman. Little is left of Sherman today. There is only one relatively intact cabin, one collapsed and several stone foundations. (all fenced off with those unfriendly signs).

Sherman was a potentially rich area but was plagued by snow in the winter and floods int he spring. Some rich strikes were made during the late 1870s and early 1880s, but it wasn’t until the Sherman House Hotel was built that the camp took the appearance of a permanent city. Much of the community activity centered around one large building which housed a dormitory, grocery and general store, butcher shop and slaughter house, bakery and storage. The summer population of Sherman’s peak years was around three hundred persons. During the fall most residents left, and few stayed in Sherman over the winter. Mining continued into the early 1900s and on and off until 1925.

Sherman was one of the many small communities which boomed briefly, then slowly perished. Named for an early pioneer, Sherman was founded in 1877, four years after the U.S. government and the native Ute Indians signed a treated which opened up the San Juan Mountains to mining and settlement. When U.S. government went off the silver standard in 1893, the demand for silver dropped, creating a nationwide depression. The drop in demand for silver forced the closure of scores of mines in the San Juans, including the Sherman area. 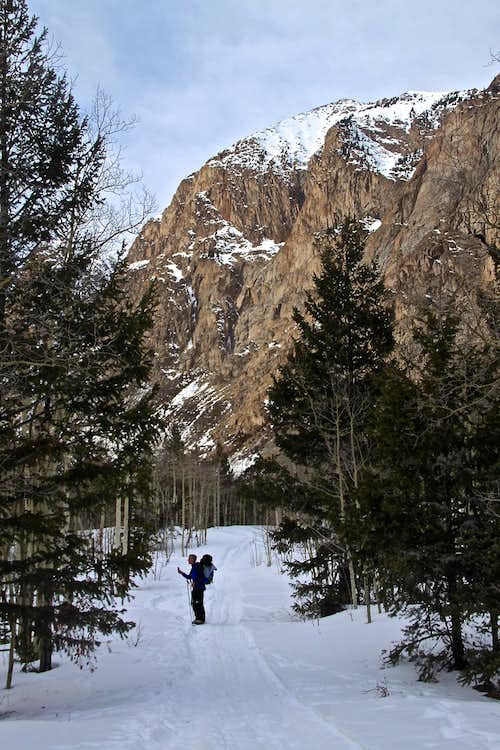 Drive south of Lake City on Colo 149, towards Slumgullion Pass. About 2.3 miles south of the Henson Creek Bridge in Lake City, there’ll be turn off to the right, Hinsdale County Road 30 (Alpine Loop Road). This is the way to the Lake San Cristobal. (Lake San Cristobal is the second largest natural lake in Colorado).

Continue on Hinsdale County Road 30 past County Road 33 and the turnoff to Happy Camper. You will pass some nice and expensive houses. Community of Sherman lies near the end of the large, open valley of the Lake Fork of the Gunnison River. Soon, you will reach Y intersection, the road to the left heads towards the ghost town of Sherman, the right fork goes over Cinnamon Pass, and ultimately to Silverton. This right fork is closed in the winter. It is another 0.7 miles from the Y intersection to the end of the plowed road, marked for Cataract Gulch Trailhead. There is a toilet at the parking lot. It is roughly 15 miles from Lake City. You don't need a 4 WD vehicle to get here (there is camping available at the parking site).

From the Cataract Gulch winter parking snow shoe or ski up the closed road for 5 - 15 min until you see the large ice climb on your left across the drainage. Follow the trail or pick the best route over to it. You may be able to hike in boots only if the approach is well beaten down since almost all traffic here is for this climb. You have to cross the stream, usually there are plenty of snow bridges over it. 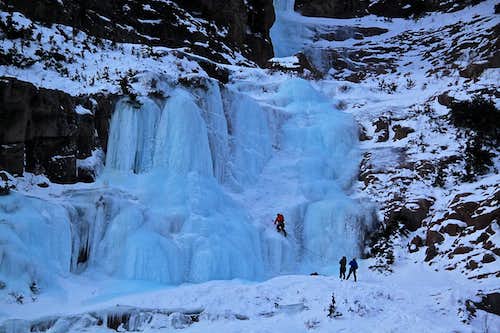 Pitch 1 with multiple options
Elevation at the start: 10,005 feet (no wonder if you get short of breath).
Season: late November through March (more popular in the fall due to high avalanche risk after snowfall)
Exposure: northeast
Remember this is a popular outing and although Lake City is remote, get an early start on weekends. It is hard to share this route with other climbers and risk of getting hit by a chunk of flying ice. Writing this, we ran into three climbers who were super nice and did let us pass them between first and second pitch.
The climb is typically described as a 4 pitch climb, with the second pitch being more of a snow hike up the hill. (I was a little bit confused when looking on Mountain Project describing pitch 1, 3 and 4 - here is the reason, pitch 2 is a snow hike or a super easy ice WI1-2 depending on conditions).
Pitch 1: Climb a nice thick ice flow with several options for different route lines to a large boulder (not seen from your start) with bolts and chains. We thought that the easiest route could be rated as WI2/3, several lines offered WI3 rating and we also found two WI4 climbs on the first pitch. This ice flow is thick enough that 2 parties can share it. The anchors were easy to spot.
Pitch 2: not sure whether I should call this a pitch or an snow walk. Hike up on snow to an obvious ice flow above. We went unprotected and felt very comfortable. It is about 80 to 90 meters long. There are no anchors at the start of the 3rd pitch (consider protecting belayer if not a confident leader).
Pitch 3: Again nice and thick ice flow of rolling ice at WI2/3 rating brings you to obvious anchors on the left side with a huge headwall above. It is about 50 meters long. Great ice for a beginner leader. We rushed this section since we had a party behind us. My partner ran it up without placing any gear.
Pitch 4: Traverse from the anchors below a steep head wall to the obvious steep ice pillar. The pillar is short and relatively steep. We encountered many steps in it from frequent ascents, and loose ice. Be aware of climbing parties below you. Once you get over the bulge head up the snowy section to the tree on your left with tree anchor. Rap from here.
Descent: Rappel x 3, you do need two sixty meter ropes. The first rappel is tricky since you have to first head for the ice fall and then to the climber's left for the anchor. Pay caution so your rope does not hand over a sharp cliff edge, and/or does not get caught).  2nd rappel is obvious and easy to the end of your ropes, then walk slightly down hill on gentle snowy slopes to the boulder with the last rappel. Again, 2 sixty meter ropes are needed for the last rappel.
If you have time, consider repeating some of the different lines on the first pitch. The area is spectacular and climbing is amazing.