The Sleeping Giant (aka Elk Mountain) is an 8744' peak that stands out prominently above the Elk River just outside of Steamboat Springs, Colorado. Unlike the nearby Zirkels, Park Range, or Elkhead mountains, The Sleeping Giant stands alone and is not distinctly linked to other peaks or ridges. The mountain is surrounded by private lands, but the mountain itself is composed of both BLM and Colorado State Lands parcels. Because the State of Colorado controls access to these parcels, the mountain is only open for hiking from Sept 1st - Feb 28th each year, and for "wildlife related activities only". In other words, if you're not hunting, you're officially "wildlife viewing". Works for me.

The trail up The Sleeping Giant isn't much of a trail. You may be able to find use trails, but essentially this is a bushwack straight up to the ridge. At the ridge you can walk east and north to the summit cairn.

The one access that doesn't cross private lands is off of County Road 46 on the west side of The Sleeping Giant. There are a couple gates here with posted signs detailing the Colorado State Trust Lands regulations.

To get to CR 46 head west from Steamboat on HWY 40. After about 9 miles (and immediately after crossing the Elk River) take a right (north) on County Road 44. Go about 2.5 miles up CR 44 (Sleeping Giant is directly in front of you) to the intersection with CR 46. Left on 46 up the hill to one of the two pull out areas. You will see the gates on your right. 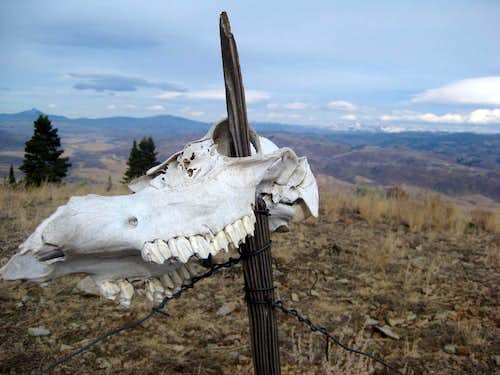 Access is controlled by Colorado State Trust Lands and the Division of Wildlife. Area is open from Sept 1st - Feb 28th each year from sunrise to sunset. You must have a Colorado Habitat Stamp (or fishing license) to access this area and your use must be for a "wildlife related activity" which includes "wildlife viewing". Hiking=bad. Hiking while wildlife viewing=good. Go figure.

The area is only open from sunup to sundown. No camping is allowed.

The Legend of the Sleeping Giant


"The Sleeping Giant is located at the west end of Steamboat. He can clearly be seen at all times of the year. There are several different tales of how he came to be sleeping here.There are several versions of the Legend of Sleeping Giant but Rusty De Lucia, a long time local resident believes that the one told to her by Kingo (Charlotte Perry of Perry-Mansfield) as a young girl is the real one.


Many years ago there lived a gentle friendly giant. He loved life and the people of the Yampa Valley and was always ready to protect anyone who lived here from any danger. The people knew he was their friend and would always take care of them.

As the story goes, the giant was told that he would be granted eternal life and always be allowed to live in the Yampa Valley as long as he never harmed another living thing.

One day a bad giant ogre came to the Valley and started to terrorize the people. The Giant was very worried about their safety and lured the Ogre up to Steamboat Lake where he fell into the quicksand.

The people were relieved and happy that the Bad Ogre was gone and the Giant had saved them.

But - because the Giant had broken his oath not to hurt anyone, even though it was a very bad Ogre, he had to be put to sleep.

The whole valley came out for a ceremony to put the Gentle Giant to rest. They surrounded the base of the giant with rattlesnakes so that he would not be disturbed.

To this day, the giant rests and the rattlesnakes protect his peace."