The steep face of Stone... 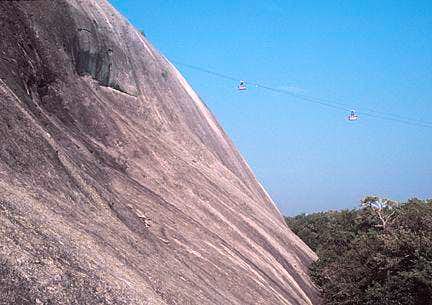 The steep face of Stone Mountain.
« PREV NEXT »

Last of the Mohicans

That looks like a shot from the movie "Last of the Mohicans". Do you know if part of the movie was shot on location?

Re: Last of the Mohicans

Many of the scenes were shot on location in the Pisgah National Forest in North Carolina. The scenes at the end of the film were shot in Hickory Nut Gorge, some sites of which I have posted here online. Shumont Mountain and Hickory Nut Gorge and The Jeep Trail. Some scenes were shot near Craggy Pinnacle (the forest scenes where Mogwa betrays the British troops and they get waylaid along the forest trail, plus the shots of Hawkeye running through the old growth forests.