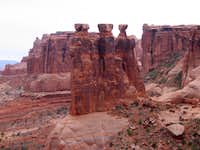 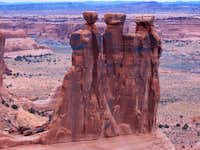 Three Gossips is a mid-sized sandstone tower (about 350 feet at its tallest wall) sitting atop a roundish pedestal within the Courthouse Towers "cluster" that also includes The Argon Tower, The Organ, Tower Of Babel, Sheep Rock, and The Lamb. The name no doubt comes from a slight resemblance of the formation to three heads "gossiping" to each other.

The tower has three flat and distinct summits: North, Middle, and South - all of approximately the same height. The North summit (probably the largest) is split by a wide chimney - a small jump gets you from one half of it to the other. Several published routes access the North and South summits (see Routes Overview section below); no routes are currently listed in published guidebooks for the Middle summit (but I thought that rap slings might have been visible on it).

Summit elevation of 4800 feet is a rough estimate based on information on a Topozone map.

DON’T SPOIL THE SOIL!
Much of the SE Utah desert including the Arches National Park is home to Cryptobiotic Soil Crust. Watch where you step as this stuff is extremely sensitive and this “stuff” is also what’s keeping erosion at bay on hillsides. The NPS recommends using established trails, sandstone slabs, and/or sandy washes for your foot travel throughout the park. For further information see the many links provided by Dr. Brian Jenkins: link 1, link 2, link 3, link 4, link 5, link 6

While on the topic, don’t soil the soil either! Don’t be a filthy animal and pack out your solid waste! 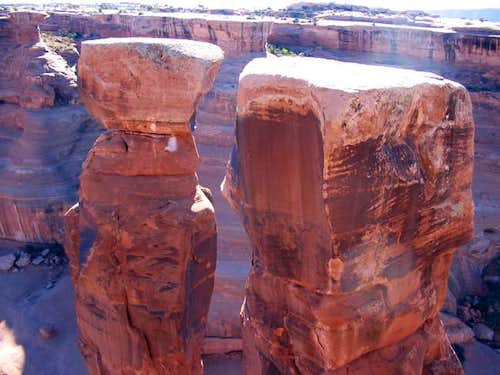 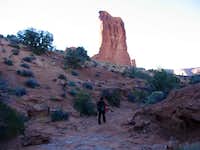 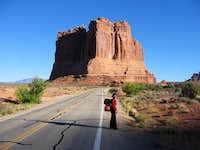 From US 191 just north of Moab (3 minutes driving time to downtown), Utah turn into Arches National Park (on NE side of US 191) via the main park entrance (Visitors’ Center complex is right here as well). Drive about 3.5 miles from the visitors' center to the Courthouse Towers Viewpoint - a paved parking lot on the right side of the park road. Leave your car here. Three Gossips are now visible directly across the road to the west.

Hike the park road a few hundred yards further north (till you almost see the west face of The Gossips) till it comes close to a large wash on the left side (wash comes within 75 yards of the road). Hike down into the wash and follow the wash towards the base of the west face.

For west face routes: Hike up and out of the wash on the right side of the sandstone pedestal on the west side of Three Gossips.

For east face routes: Burns' guidebook suggests approaching as for west face routes and then traversing NE atop the pedestal to the east face (probably exposed). 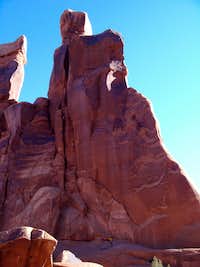 The Three Gossips are located within Arches National Park. In addition to the entrance fees (see below) the usual backcountry behavior rules of the national parks apply here (no dogs in backcountry, no power drills, tread lightly, leave no trace etc….). Backcountry camping is allowed in designated areas only and you’ll need an overnight permit. 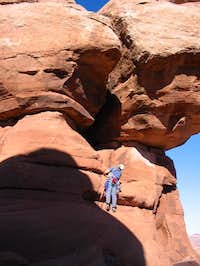 Given the desert (albeit high desert) environment, the rock is climbable year-round. Keep in mind that winters can be wet and chilly and summers are no doubt unbearably hot. If "forced" to climb under less than optimal conditions, adjust your choice of routes (east vs. west facing).

Unofficially, you can find very good camping at large on BLM land especially in Castle Valley. Good primitive campsites can be found at the standard trailheads for Castleton Tower. 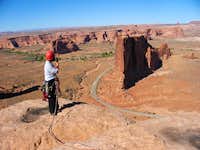 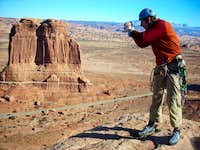 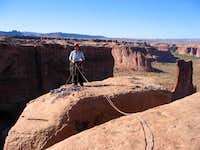 In addition to the West Face route ("standard" way up the North Gossip), the following routes have also been published in literature:

(2) Lyon-Trautner (II 5.11). Tops out in the "notch" between Middle and North Gossips. Continue up West Face route to summit the North Gossip.

(4) Speak No Evil (III ??). Tops out in the "notch" between Middle and North Gossips. Continue up West Face route to summit the North Gossip. Has one published variation.

(1) Desert Rock I: Rock Climbs In The National Parks by Eric Bjornstad includes the most comprehensive list of routes on The Gossips - all routes listed in the Routes Overview section are described. Book also includes topos of West Face and Lyon-Trautner routes.

(2) Selected Climbs In The Desert Southwest: Colorado And Utah by Cameron Burns. Lists two routes on the Gossips (West Face and Speak No Evil with one variation) and includes nice-looking topos for both.

(4) Rock Climbing Utah by Stewart Green. Descriptions for West Face, Lyon-Trautner, and Be There Or Be Talked About (III 5.11 A1 & Variation - this is the route up the South Gossip) are included. Nice looking (detailed & clear) photo overlays for all three are also there. Note however that if you follow the West Face route overlay too literally, you'll end up trying to climb the overhanging squeeze instead of the easy chimney.

(5) >Be There Or Be Talked About TR - excellent write up & photos to match from piquaclimber.com

More when I find them.