Unless you are blind, rendering you unable to read a map or look upon the scenery with your own eyes, it does not take a lot of smarts to understand why this peak, or, more accurately, this formation, is called "The Triplets."  Yes, there are three peaks!
Actually, there are four, but the westernmost is such an insignificant bump that whoever gave this mini-massif its unofficial name must have considered it unworthy of inclusion.
Climbing the Triplets is merely a matter of 3-4 RT miles from the road, but it doesn't take long to feel as though you are in another world.  Here is why--
The highest of the four peaks (yes, we will give a little love here to the fourth peak and include it), is the easternmost one.  The westernmost is the lowest.  The traverse between them offers perhaps the most interesting climbing.  Translation: if you go out here just to "get" the highpoint, you're missing out on a lot of fun and the real spirit of the mountains as well.
I will now refer to these Peaks as 1-4, in order from left to right on maps, which is also west to east.  So, some comments on the peaks: 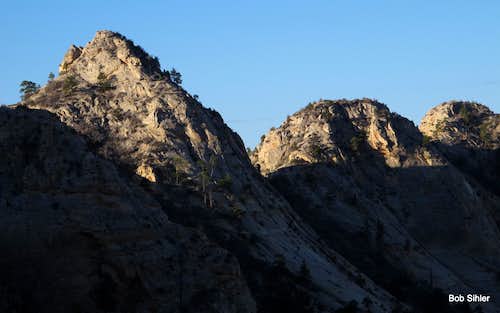 From the peaks of the Triplets, one can see across the slickrock and washes to the south to the rims of Parunuweap Canyon, also known as "The Barracks," through which flows the East Fork of the Virgin River.  This canyon in one of the most remote areas of Zion (although it is near Zion's border, maps show no roads or maintained trails accessing the portion inside the park) is said to narrow in places into a slot as spectacular as the famous Virgin River Narrows.  Although the author of the given source reports that the canyon is not technical, he says the route-finding is more difficult than it is in the canyon's famous cousin.
From the vicinity of the Triplets, there appear to be ways to access the plateau to the south.  From there, one can follow one of the washes to the canyon's north rim.  Some cross-country travel is likely required near the rim since the washes may steepen and/or become very brushy as they near their ends.  It is not likely that one will find a ready way down into the canyon from this direction (not likely does not mean impossible), but a trip into this lonely country and a gaze into the depths of the canyon is certain to be very rewarding.
The canyon's north rim is about three miles south of the Triplets, meaning you could include this excursion as part of a long day, but it might be more enjoyable to backpack in if permits are available for the area.
Please see the link to the NPS Zion page in the External Links section for information about backcountry camping.
Note that there probably will be no water between the Triplets and the canyon rim. 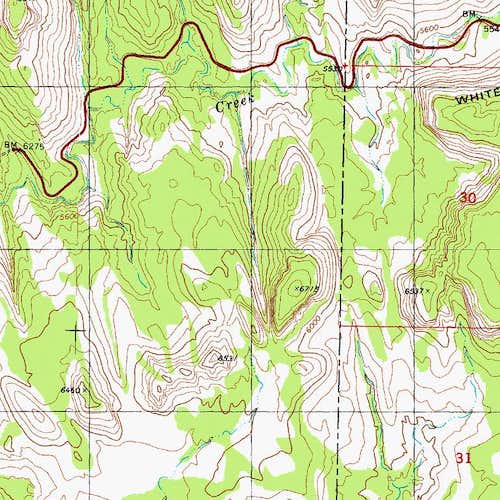 The highest of the Triplets (there are actually 4 summits, but the westernmost one is such an insignificant bump that it hardly counts) is Point 6531.

From Zion Canyon, drive east through the Zion-Mt. Carmel Tunnel, which many people apparently see as a highlight of a Zion trip but which I have always found tedious since so many drivers feel compelled to go very slowly and to honk their horns in the tunnel as well.  Tip: go through before 8 A.M. to avoid most traffic and to avoid being subject to traffic control in order to let RV's and other oversized vehicles through.
Continue east to a second tunnel and drive about half a mile to a large pullout where there is a view of a slickrock waterfall (see below). 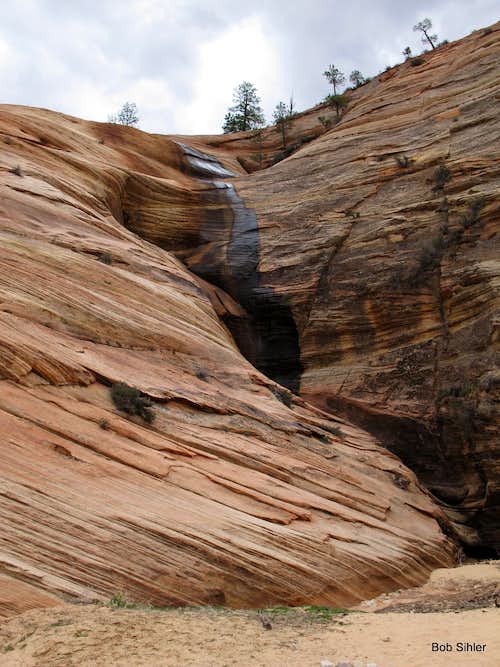 Of course, you can approach from the East Entrance as well, but I have never recorded the pertinent distances from that direction.

Drop into the wash below the parking area and then head up the slickrock slabs on the other side.  Make the top of the waterfall your initial goal.  It is not difficult at all to keep this part at Class 2, Class 3 at the most.
Now either the follow the watercourse a bit and then clamber up and left when you reach an impasable cliff or find a use trail that roughly parallels the watercourse on its left side.
Eventually, you end up back in the sandy wash.  Follow it, negotiating occasional obstacles, until you reach a wide basin of sandstone and slickrock beneath the Triplets.  This is a beautiful setting.  Footprints in the wash and the use trails near it suggest a fair number of people have reached the basin, but there are very few signs that anyone does anything other than turn around and head back after getting to it.
If your only goal is the highest peak, then the course is pretty simple.  Work your way to the saddle between that peak and the unnamed peak (known to a few as "The Fin") just east of it and then head up the ridge.  You should encounter nothing harder than Class 3 if you go that way.  (I took a more direct approach and got into some loose but fun Class 4 stuff.)
If you want to hit all of the peaks, then you can go the way described above, or you can head west across the basin and then use either of two chutes to reach the saddle between Peaks 3 and 4.
With decent route-finding skills, difficulties on the traverse should never exceed Class 4.
The summit cairns you will find were placed a few years ago by another SP member.  He does not think he was the first to climb these peaks but could not find any records (or signs) of previous ascents.  Very few people climb these peaks.