Mike Bean catching some turns in the lower half of the Trough. -March, 2009

**This page originally belonged to Chris Pruchnic (Haliku). However, due to his accident and the dreadful consequences, the Elves have graciously allowed me to take it over to update. I've decided to leave a good portion of Chris' material on this page. Chris' name will remain. I hope you're at peace buddy. 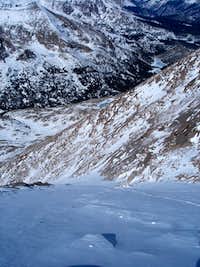 Looking down from half-way
Pretty much from the beginning (1860's), Longs Peak has served as a veritable beacon and worthy destination for all manner of hikers and outdoor enthusiasts. As one would expect, for such an iconic mountain, there are a myriad of routes that take the adventurer to the summit (over 100+ actually).
There are classics like the Keyhole, Cables Route and for the technical climber, the Casual Route & Alexanders Chimney are excellent. Others, like the Notch Couloir, Trough and Keplingers Couloir are rooted in history and make for great snow climbs. The Trough is especially such a route.

The Trough is located on the west side of the mountain. Because of this, it typically doesn't see direct sunshine until later in the morning. The Trough provides an almost unbroken, continuous line to within a few hundred feet of the summit. As snow climbs go, this is one of the longest climbs in Colorado (alongside The Cristo Couloir on Quandary Peak & the Bell Cord on South Maroon Peak) and undoubtedly, the best on Longs Peak (especially when you factor in safety).
The Trough is roughly 2,150' of vertical; talk about getting a lot of bang for the buck!!
And having Glacier Gorge, Pagoda Peak, Shelf & Black Lakes and Chiefs Head Peak as your backdrop, this also ranks as one of the more aesthetic climbs in Rocky Mountain National Park.
The Trough is a good, solid moderate snow climb. DO NOT attempt this line in summer or later. Since the top of the Trough merges with the Keyhole Route (arguably the most popular on Longs Peak), the chances of encountering rock fall from other climbers is extremely high.
The average pitch of The Trough is around 30°-32°. So again, fairly moderate and mellow. This route never really steepens like many couloirs do near the exit. It stays pretty much consistent for the whole climb.

In terms of winter ascents, the Trough is the primary ascent route. Other avenues to the summit have seen successful ascents (Cables Route, Keplingers, Notch & Kieners) but the Trough remains the safest option in winter to achieve the summit. Unfortunately, due to that same western exposure/strong winds and frequent bad weather, getting a direct, continuous ski line from the top (~13,820') can be a hard sell as the top usually gets wind blasted and scoured. But, it does happen! 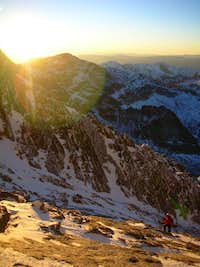 The Trough at sunset
Start from the new Glacier Gorge parking lot. Follow a 0.3 mile spur trail to access the Alberta Falls trail. This trail is 1.9 miles according to the signs. There is also a winter shortcut on the right at the second bridge that follows the stream and joins up at the 1.9 mile mark. Locals claim it shaves a mile off the trip.

At the 1.9 mile trail junction follow the signs for Mills Lake. Pay attention to the trail signs as its easy to head up the trail to The Loch in the dark. The path is an easy Class 1 that soon leads to the edge of Mills Lake. This is a beautiful spot for a quick break!
Cross Mills and Jewel Lakes continuing up the drainage to Black Lake which is about 2 - 2.5 hours from the parking lot. Past Mills Lake if a trench isn't already in place, the wallowing through the trees can be overwhelming.

Follow Black Lake's left shore for 100 yards where it opens into a drainage where you want to go leading you into a higher valley. Walk up the valley until it levels out.
You need to go to the left side of the valley. The Trough is on the left directly across from the shoulder of The Spearhead. It should take less than an hour from Black Lake to the base of the Trough at approximately 11,600 feet. Some ice can be encountered at Black Lake. Climbing through the cliffs
The Trough is a long couloir snow climb. Skill with crampons and ice axe are needed. The Trough is so long that in the advent of a fall, there is plenty of vertical to arrest without hitting rocks/talus. The couloir ends on Longs' west ridge about 13,850 feet at a chockstone which can be passed on either side.

A series of trail markers, red and yellow circles (bulls-eyes), are painted on the rocks from the top of the trough until the summit. A ledge, called the Narrows, is the next leg. This is the worst exposure of the route. It leads to the homestrech, typically a small snowfield, which tops out onto the summit.


Leave Black Lake heading east towards Longs Peak. The path will lazily meander slightly south (hikers right) and come to an abrupt stop at some cliffs. Take the left hand ramp to avoid the cliffs and go around. It is possible to climb straight through the cliffs if you wanted to practice some easy mixed climbing with crampons on. It's probably M1+ or M2 if ice is present.
Follow the wide and long ribbon of snow to the top of the couloir some ~2,000' above. If the snow is bad, there are large sections of boilerplate granite interspersed with loose talus climbers left, that one could climb instead.
As said, the pitch stays constant for the entire climb. Once you near the top, when you start seeing those red & yellow bulls-eyes, the Trough merges with the Keyhole Route. The Chockstone can be a bit tricky to finaggle around but again, do so on either side of it. The right side is slightly harder but it's negligible.
The Trough is a great route for the more advanced beginner or a delight for the intermediate!

Route
Crampons, ice axe and helmet are essential for this route. Ice tools are NOT necessary. A helmet should be worn as small rock fall is a common product of the freeze/thaw cycle. Small rock was noticeable in the snowfield. Snowshoes are helpful for the approach and can be left at the base of the Trough as many do.

I'd also recommend a warmth layer, softshell and maybe something lighter for the actual climb portion. Even though this is a moderate climb, the environment is solidly alpine. Conditions change.