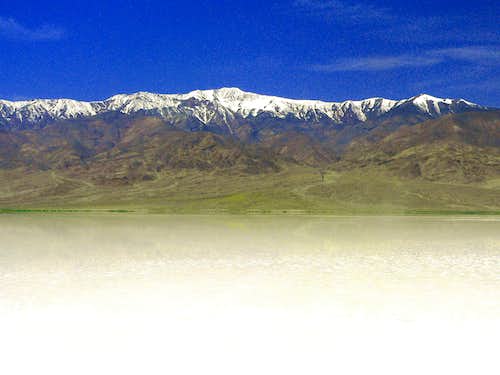 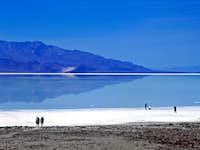 "On the beach" near Badwater
Winter hit California suddenly in September, '04, trapping experienced backpackers in the Sierra and bringing torrents of rain with it. The heavy weather continued all season. The S.F. Bay area was still getting pounded well into May and houses were sliding from Oakland to L.A. with tragic results. Finally the skies cleared up, the sun came out and it was time to get out to the wide open spaces.
Death Valley was reported to have record spring of flowers and the Valley itself had become a shimmering inland sea!
I got there a little late for the fields of desert gold that covered the lower areas even though there was still beauty in the higher elevations. This wasn't my concern. I was there to hike peaks. My main objective was Wahguyhe Peak, 8,628', the second highest in the rugged Grapevine Range deep in the northeast part of Death Valley National Park. 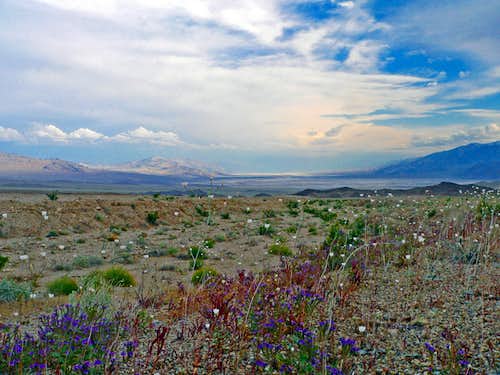 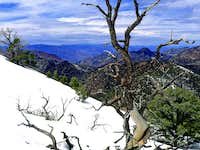 Wahguyhe Peak northeast slope
The approach to the peak is from the east, up out of the Valley and northeast into Nevada. It's one of those long high desert drives into increasing desolation as civilization becomes a memory. Where obscure desert ranges rise out of the vast expanse of sagebrush plains. At night a few lights twinkle somewhere off on the unfathomable horizon and the sky is a shock of stars that stop the mind.
Death Valley itself is already 100 miles from the nearest metropolitan area. It's 13 miles from Daylight Pass to Beatty Nevada, the bustling intersection of Hwy 374 and 95. This little hub of humanity is graced with a ham and cheese deli, a few slot machines, a gas station and some industrial goings on that I failed to take note of. From there it's 14 miles north on 95 to Phinney Canyon Road where I parked for the night, my road of destiny! 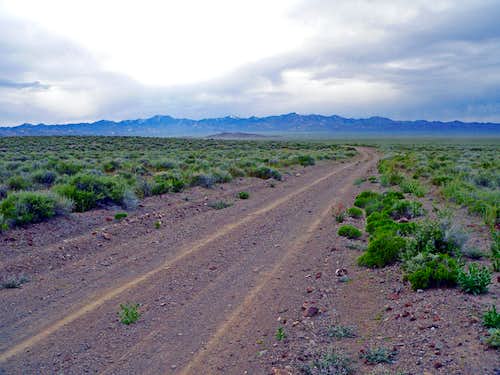 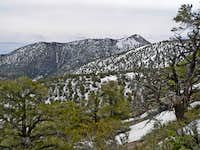 Wahguyhe Peak from Phinney Canyon
Up at dawn with mild temps. under an overcast sky at 5,000'. Some tea and a Clif bar and I'm negotiating the Phinney Canyon road in the 2-wheel drive, high clearance van with relative ease on the long 21 mile drive into the Grapevines. Finally after the slow rambling approach I'm deep into the canyon of pinyon covered slopes. I've reached the end of the road, not a soul in sight.
I decided to turn the van around before starting the hike. Popped it in reverse and backed it around. Put it in drive and started spinning! Uh-oh. No way! Tried again slowly and got deeper! No freakin' way! This ain't happening! Got no wench. The mind goes into overdrive and starts doing the math: "21 foot miles at 4 mph to a highway where a car goes by every 15 minutes to a 2 horse town in the middle of nowhere. This is unacceptable!! Time to hunker down and get this sumbitch roadworthy!
Started scooping rock with the saucepan. Digging, scraping, praying and sweating. Maybe I got it now. Over and over with everything I could find for 45 minutes!
I finally get it up on the burm of the road and slam on the parking brake to keep it from moving while getting out
to prepare the way for one last lunge. Another prayer and one final try. Here we go! It ain't movin'! I'm gonna cry.
Hello?!! Release the parking brake knucklehead! Zap!! The van cruises to the middle of the road. Wheww!! Damn that was close!! Wiping the sweat from my brow I get out to inspect the ground I'm parked on like Columbo checking out a crime scene for any more geological treachery under foot. A victory well earned!


Sisyphus with an ax 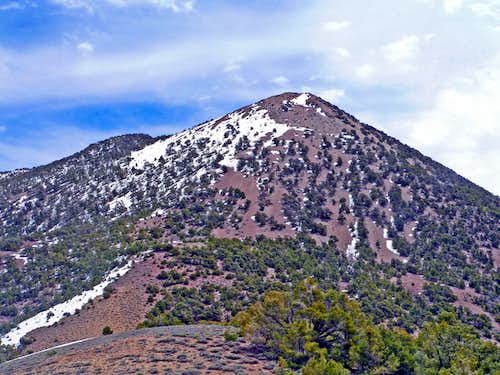 Wahguyhe Peak's unaccomodating north slope
Now I'm kinda pooped and the inside of the van is covered with loads of dust from all the ruckus. Still the peak awaits. It's time to get to the original task at hand after this unexpected squabble with the elements.
Up the trail to the 8,000' crest of the Grapevines then south where the loaming north slope of Wahguyhe Peak awaits. It's a straight forward 1,000' scramble of "steep talus" to the summit. Right?!!
As I start up it quickly becomes obvious that this is not going to be fun at all! It's as though a thousand dump trucks full of formulated chunks of large gravel had released their loads down the 30 degree slope and the drivers were waiting on the summit like gleeful cackling on-lookers for some bonehead hiker to attempt to climb it!
This monumental slogfest was right in tune with the previous episode! I grunted, cursed and sweated my way up like Sisyphus with an ax to grind, occasionally reaching an oasis of limber pines to pull myself along in this largely verticle sea of scree. 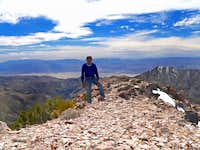 Wahguyhe summit south
Finally arriving at the gentle rounded summit all was forgiven. I took in the awesome 360 degree views that stretched to the east across Sarcobatus Flat and the Amargosa Desert deep into Nevada. To the southeast along the spine of the Grapevines all the way down rose Pyramid Peak, the high point at the south end of the Funeral Mountains. To the south the massive bulk of the Panamint Range was topped by Telescope Peak. To the west over the Cottonwood, Last Chance and Inyo Ranges was the snow clad High Sierra and to the north snowy White Mountain Peak.
Oh yes, a short distance down to the east were the Bullfrog Hills. Probably named by Shorty Harris the legendary prospector who struck a vain there. Shorty musta been tipping a few back at the local saloon in Ryolite, as he was known to do, when he came up with that one!
And over yonder, out of sight at the northeast part of the Valley is the Ubehebe Crater. A giant bowl a half mile wide and 500' deep where a subterranean steam vent blew out the ground 2,000 years ago. South of that is Ubehebe Peak a popular little hike above Racetrack Valley, home of the mysterious moving rocks. That place is kind of like Lock Ness where speculation outways concete evidence. At least the rocks leave trails on the playa. My hunch is it's a Jedi mind-training school for ETs! 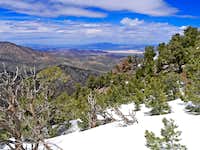 Wahguyhe northeast slope
So now I'm post hole surfin' down the northeast slope through a pine forest back to the trailhead to drive all the way back to Death Valley for the evening. Shakin' my head, you never known what your gonna find out there in no mans land. Musta been the Wahguyhebe Jebes.
Don't think I'll ever take the Phinney Canyon Road again.

I love Death Valley, especially the obscure peaks on its perimeter.

You shouldn't have been out there without a wench!

Re: always carry a wench

Hehe. I guess you read the story. Luckily i got out but you are right. Thanks for the advice. Next time I climb an obscure desert peak I should have one. You never know how those 2 track roads are going to shape up the further in you get.