The Windshield Tourist vs. the Mountaineer: "That's what you do."
Wyoming, United States, North America

The Windshield Tourist vs. the Mountaineer: "That's what you do."

A Debate Within, and a Journey Without

Friday would be the last full day of my summer trip, and I decided to spend it on roadside photography, fast food, and beer.  After all, I had earned it, I thought.

Upon reaching Green River Lakes and gazing at the peaks and the lake making up one of the most famous views in Wyoming (but doubtlessly seen more through photographs than in person due to the long, bumpy drive to get there), my tired, lazy side became embroiled in a battle with my resurgent inner mountaineer.

Despite the sense of accomplishment-- 28 mountains and 36 actual peaks over the last 34 days-- and despite the protests and pleadings of my increasingly sore knees, the mountaineer kept pointing to a particular summit and saying, "You're a climber. You go up mountains. That's what you do. You know perfectly well you'll regret it if you spend your last day out here on little bullshit things. One more summit. One more adventure and discovery. Let's do it."

When the hell did I become Gollum?

The inner windshield tourist kept asserting we'd done enough.  He also pointed out that the peak was probably beneath us. Two miles of essentially level trail hiking followed by about three of bushwhacking and meadow walking after we'd spent the past few days on nothing but Class 3-5 peaks? Really?

But the mountaineer wasn't hearing any of it.  The mountaineer made us ready the pack so that at dawn, all there would be to do would be to relieve myself of the remnants of the night's beers, brush my teeth, put on the pack, lock the car, and go.  Meek and retreating, the windshield tourist quieted down but secretly hoped for morning rain and clouds hiding the summits.

The goal: the summit of White Rock Mountain, which is not actually marked as such on maps.  Instead, the maps seem to suggest the long cliff bands on the west side of the mountain are White Rock.  But it makes sense to call the mountain White Rock Mountain.  Besides, the summit is a 100' pinnacle of whitish rock that provides a surprisingly pleasant and exciting finish to what is otherwise basically just a walk, albeit a very steep one at times.

Now, when you think of the Wind River Range, you most likely think about the big glaciers and glaciated peaks in the heart of the range or about the granite spires of the aptly named Cirque of the Towers.

The northern part of the range, however, is not like that much at all.  Instead, deep canyons, thick forests, and broad, flat-topped mountains predominate.  While the heart of the range is more in tune with an alpinist’s dream, the northern section is more evocative of the classical West; you almost expect to see cowboys driving a herd, or a pair of outlaws to appear riding in the distance. 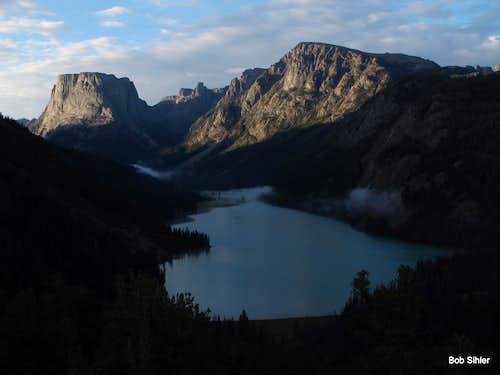 What the northern part of the range is more like

As I set off at dawn and found myself to be the only person out on what is one of the busiest sections of trail in the Wind River Range, I reflected, once again, on the many rewards of rising early no matter how much the warm covers tempt me to stay.  Not only did I get out and back well ahead of the thunderstorms that sat over the range later in the day, but I also enjoyed solitude and the prettiest light of the day.  In fact, I did not see another person all day until I returned to the trail on the way back, and it was still early enough that I didn’t encounter too many other people.

After leaving the trail and beginning the much-dreaded bushwhacking section, the windshield tourist began preparing his “See?” speech, but his smugness shriveled away before the triumph of the mountaineer when it turned out that there were good game trails that all but eliminated any true bushwhacking.  Having spent far less time and effort than expected to get to the open ridge that would lead to the summit, I allowed myself a smile for the good choice I had made in doing this one last peak.

From there, it was all splendor as I hiked up meadows and feasted on the sights, sounds, and smells of the early mountain morning, depicted to some extent in the following photographs.  The summit pinnacle was the icing-- reaching the highpoint required about 100’ of Class 3 scrambling at the end. 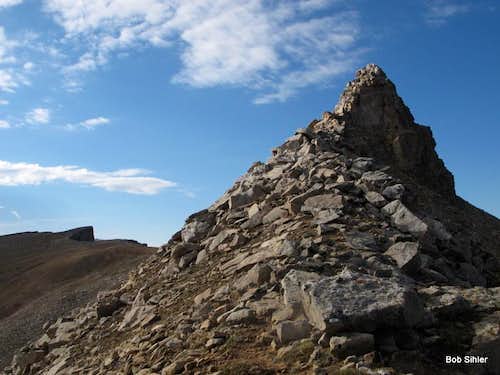 And what a summit view!

Seemingly so close yet really at least two days’ travel away because of canyons, streams, ridges, and passes is Gannett Peak, highpoint of the range and all of Wyoming. Far to the northwest but easily visible on a clear day is the Cathedral Group of the Tetons, which includes the Grand Teton, Wyoming’s most famous peak (Mount Moran, another famous American landmark, is visible as well).  From the Tetons, let your eyes drift east and north across the sprawling Mount Leidy Highlands to several peaks of the Absaroka Range’s Togwotee Pass area: Angle Mountain, Breccia Peak, Mount Sublette, Sublette Peak, and the Pinnacle Buttes.  (SP has pages for all of these places).

In the more immediate vicinity are spectacular crags and cliffs of the northern Winds.  Among them is Squaretop Mountain, practically right in your face and also a famous Wyoming landmark.  And more than 3000’ directly below you, the Green River, which rises in the mountains out here and doesn’t end until its confluence with the Colorado River deep inside Utah’s Canyonlands National Park, winds through meadows and empties into the upper of the two Green River Lakes, which is stunningly colored by silt from the Mammoth Glacier and other smaller bodies of ice.  The stream retains that color as it leaves the lake and flows into the lower and more-photographed of the lakes, where the milky stream waters are quickly absorbed by the deep blue waters of that lake.  From the summit, it is easy to see the striking contrast between the two lakes.

By far, the view of the upper lake was my favorite of the day.

Some of those views: 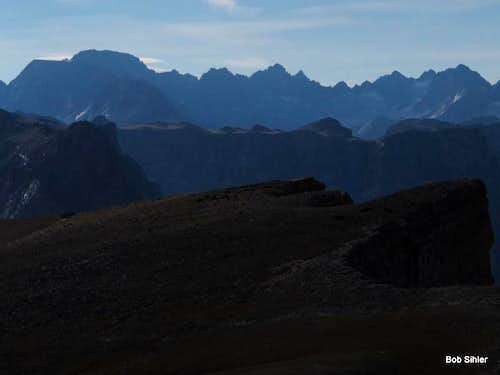 Gannett Peak, Wyoming's highest, is on the left. 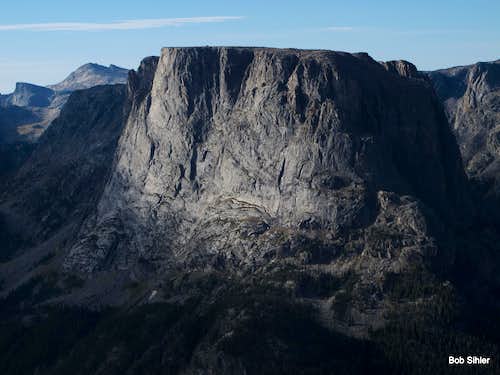 Squaretop-- Many gaze upon this peak from the trailhead at Green River Lakes; very few ever see it from this perspective. 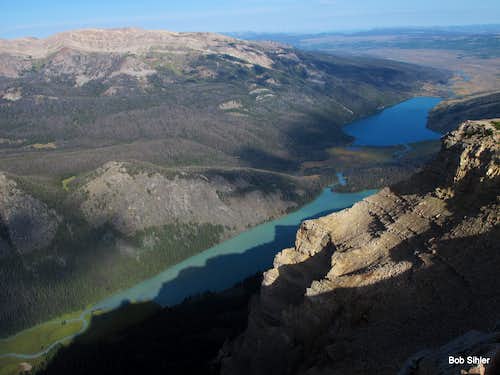 Note the contrast between the colors of the two lakes; the upper lake gets its hue from glacial silt, while apparently little or none makes it to the lower lake.If you enlarge this picture, you can see the Grand Teton and Mount Moran. The view from this peak is one of the best I have ever found in Wyoming. 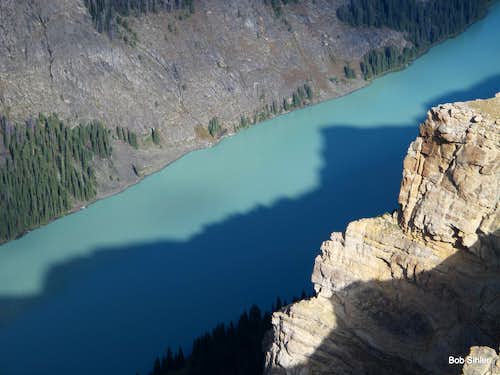 The solitude and all the views are the highly rewarding payoff for getting to the summit of White Rock Mountain.  It is one of those mountains not for climbers but for those who seek to merge their spirits with the wonders of the mountainous world.

And so the windshield tourist lost every argument.  Once again, the mountaineer was right.

Listen to your inner mountaineer!

View The Windshield Tourist vs. the Mountaineer: "That's what you do." Image Gallery - 13 Images

For Squaretop Mountain? Is there a Class III or easier route to the summit?

I think there was a page way back but it was deleted, and I don't think the author had climbed the peak, anyway. There are supposed to be some Class 3 routes as well as several Class 5 ones, but it is a very long approach, and I don't think many people climb the peak.

"When the hell did I become Gollum?"

Bob, one of the things that I like about your writing is that you don't take yourself too seriously. That being said, there's nothing wrong with some degree of an inner Gollum. If it wasn't for that, the Himalayas would still be unclimbed. Just don't go wandering around dark and detestable lands with giant evil spiders.