There and Back Again: Buckskin Marathon 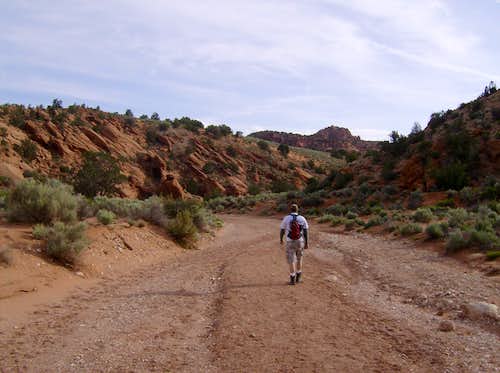 My friend Todd and I had been planning a return trip to Buckskin Gulch ever since our February trip ended in spectacular failure. A blown engine, wet forecast, delayed start, and roads of impenetrable red clay mud all conspired to send us home without that post trip high. A certain bitterness had lingered in the back of our minds since that fateful excursion, and we were determined to wipe it away with a grand "Wire Pass to the Paria confluence and back to Wire Pass" extravaganza. Initially we had determined to leave early Saturday and have the afternoon and evening to enjoy the surrounding area before hammering out the 26 miles or so we had planned for Sunday. But, duty called, and both Todd and I were delayed playing lazer tag with 12 eight year olds for a birthday party our friend was throwing for his son. Todd and I took out our anxiety about leaving late by blasting away at the young jedi until they complained we weren't playing fair. After a scolding by the birthday boy, we settled down and let them fire away at us like good parental role models. It actually was a lot of fun, and after the obligatory cake and ice-cream, all youngsters were dropped off at home and Todd and I hit I-15 headed south.
Todd and I have been friends for 20 years, so the trip down seemed to take no time as we discussed the finer things of life: burgers at JCW’s, changing diapers, college football, mortgage payments, Coke vs Pepsi, what happened to Carlos Boozer in the playoffs, etc. After rolling down I-15 for a while, we took highway 20 over to 89 and headed south. It’s a beautiful stretch of road that I highly recommend. I saw a very interesting peak looking south from highway 20 (roughly 12 miles from the I-15 turnoff) I don't know the name of it, but I would love to climb it. It was fairly triangular in shape and at least 10K in elevation? If anyone knows what I’m referring to from that incredibly detailed description, please let me know. Anyway, tunes ranging from ACDC to Neil Diamond, and from to Jay Z to John Denver were blasting away, but as we made the turn onto House Rock Valley road we pulled over for a bit of a ceremony. You see, Todd and I have one guiding rule for all trips: When the pavement ends in southern Utah, U2 must be played at high amplified volume. Bono brought us home around 9:30 pm as we found a camping spot in the overflow of the Wire Pass trailhead area. We set up next to a friendly couple from Atlanta, Georgia. After chatting for a bit, Todd did the usual and went to bed early, while I watched the fire into the wee hours of the night. 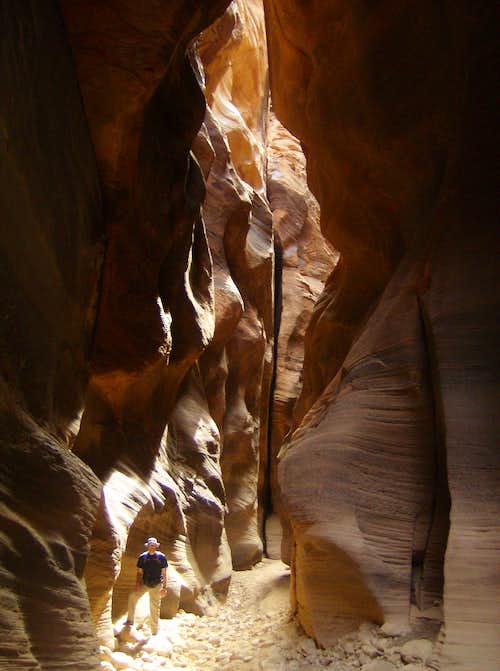 After a few hours sleep we arose, broke camp, gathered our kit, and threw down the breakfast of champions: muscle milk and oatmeal. Yum. I was being my normal fickle self….what shoes would be best? How much water? What size pack? Todd just stood there laughing at me, wondering when I would get geared up. After settling on boots, 200 oz, and medium, we were on the trail around 8:30 am with Todd leading the way. An interesting side note about Todd? I manage a health food store, and work out 6 days a week doing weights, cardio, and some yoga to try and stay in shape. Todd works out no days a week, skips breakfast, drinks 100 oz of Pepsi a day, eats junk, and never gets tired. Whether it is 5000 feet of elevation gain in the Wasatch, or 15 miles through the San Rafael in 100+ degree temps, he just doesn't seem fazed. Once an athlete, always an athlete I suppose (that, or a tribute to genetics, but either way it’s maddening).

It was perfect weather and the miles began to tick by. The initial trail follows a bit of a wash until you arrive at Wire Pass.

I would describe Wire Pass as a mini slot canyon - a warm up for what you are about to experience. Wire Pass connects you to Buckskin Gulch and on you go. I really enjoyed the first few miles as the canyon seems to follow a pattern of wide open areas connected by narrow passages. Around 11 am, what clouds there were lifted and it was turning out to be a beautiful day. 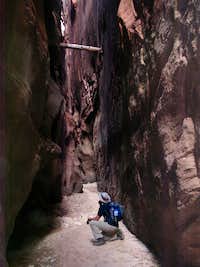 We stopped around noon for a bit of lunch in one of the more open areas under the shade of some trees. Todd and I were both in good spirits and feeling great. Ok, so maybe I was a bit sore from bouncing down a rain/snow soaked Olympus two days before we left, but so far the trip was going great. We hit the rock obstacle just after 1 pm. Todd grinned and I knew what was coming...  Mr. Baldwin and I have this joke that that originated while scrambling around in the San Rafael Swell. While climbing in the Swell, we had got to a pretty exposed part where a fall would have been serious. Todd's reaction? He dropped his pack, took a look, and jumped. He then turns around after safely making the landing and says, “I don’t know feller, I’m thinking you might have to roll a 20 to make that crossing.” (those of you with high nerd IQ will recognize the Dungeons and Dragons reference). So now, whenever we encounter anything above class 2, I am treated to his smiling face questioning my agility score. I believe he even once offered his "plus 5 shoes of climbing." Todd has an interesting picture of me navigating the ropes at this section of the canyon, but for the obvious reason of preserving my pride and self respect, I have chosen not to include it in this trip report. At 2 pm we reached our goal of the Paria Canyon/Buckskin confluence where we relaxed, ate a bit more, stretched out, and admired the unique beauty of this are. After that break, and my obligatory summit/destination tribute to SDD, we started back for Wire Pass feeling the high that only comes by being out on a spectacular wandern. 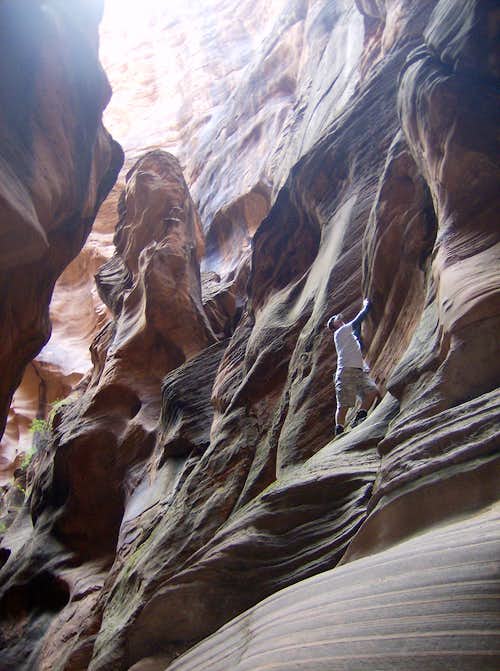 We soon encountered one of the groups we passed on the way down who asked if we had dropped something along the way, and were going back for it? They offered to give a ride from the White Horse trailhead back to Wire Pass if we wanted to go out Paria with them. We thanked them, enjoyed their quizzical looks, but declined saying we wanted to see Buckskin twice - once in the morning light on the way down, and again during the evening light on the way back. After all, we were finally in the canyon we had been thinking about for months and we wanted to maximize the experience. Todd and I continued on making fairly decent time, but at 5:30 pm we hit a bit of a wall. If I'm to be honest, I was pretty gassed. Not necessarily low energy, just a bunch of aches and pains setting in: twinging knee, sore feet, gingeritis, etc. Todd you ask? He admitted to "being a little winded." At this point we knew it was time to break out the secret weapon: supersize Redbull. The night before we suspected we might need a little help along the way at some point, so at a grocery store in Kanab we reached for a couple cans of the Austrian wonder elixir. I've enjoy the small size on a regular basis, but we noticed a rougly half gallon size and decided to give it a shot. Now, I'm not a huge believer in energy drinks while exploring all day because after buzz fades, you are left more fatigued, dehydrated, and mineral deficient than when you started... But, at this point of our hike we needed a little help and so the chugging began. I realized we had about 3 hours left, and I was hoping the artificial energy would be enough to get me to the finish line...

Twenty minutes later, the magic silver cans had Todd and I singing songs and dancing through the red rock. I believe I belted out a particularly rousing version of Pete Yorn's "Burrito." The caffeine and B-12 did the job we hired it for and at 8:30 pm we reached the Wire Pass connection and made a left turn. We exited Wire Pass to the setting sun, talk about timing... What a day! What a canyon! 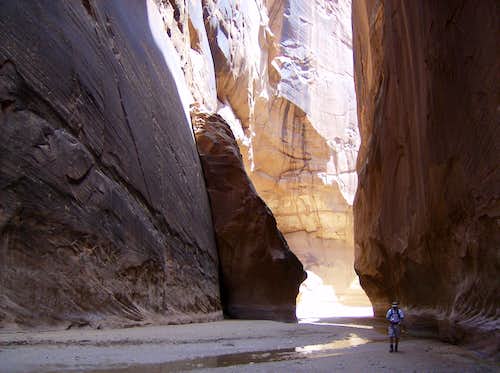 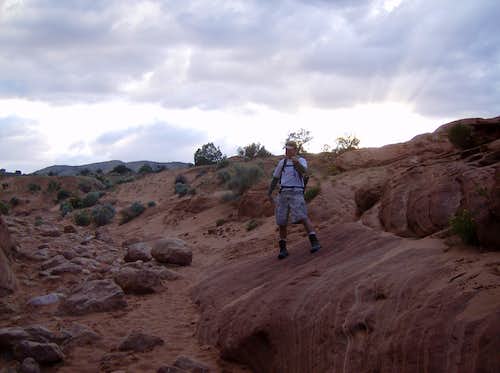 View There and Back Again: Buckskin Marathon Image Gallery - 14 Images

Well done and lots of nice pics. A big thumbs up.

Jim, I hope you write more trip reports, you have the writers touch. Keep em coming.

I learned from the best.

I read your trip report and am once again getting the itch to get lost in some desert canyons. Thanks for the report.

Glad you enjoyed it! And you're right--the deseret is good for the soul. But I'm guessing you know that if your name stands for Joshua Tree...

As a lover of the canyons I appreciate your adventure and the enjoyable narrative - looking forward to the next jtree and Todd adventure...

Thanks Rob, glad you enjoyed the TR. By the way, you've got some great photos of the Wasatch.

just thinking of doing Buckskin both directions in a day. ;p

Thanks, but checking out your canyoneering adventures tells me this would just be a warm up for ya. Great stuff on ZNP!

I think Buckskin and BACK in a day would tire anyone out! I did it one way in a day and I was really really bushed!