This River Runs Thru Me 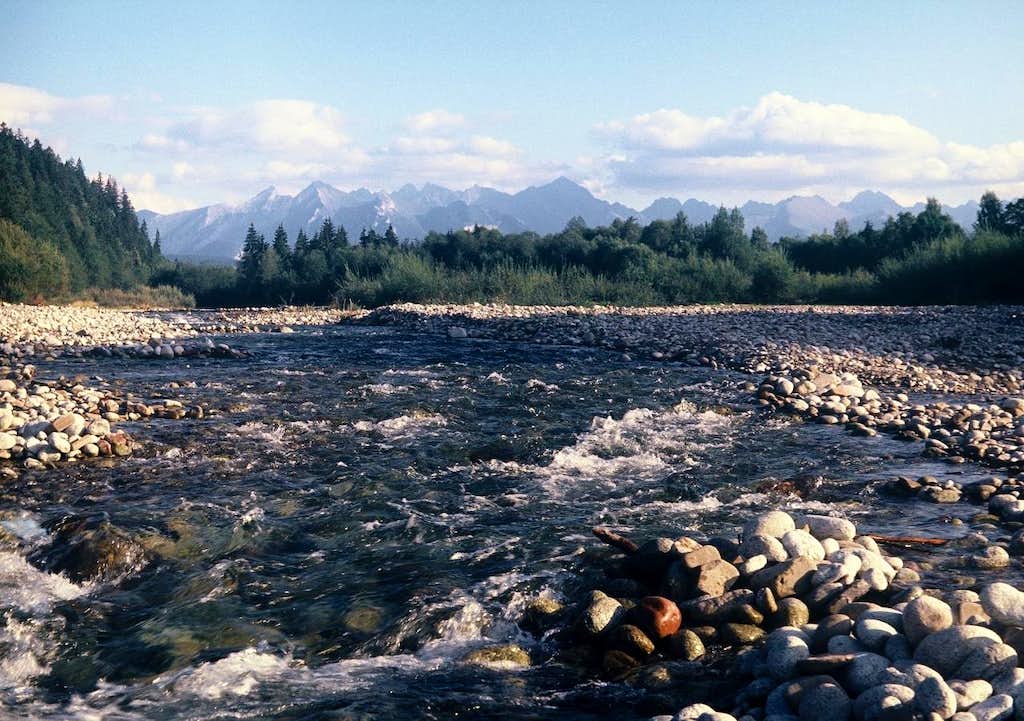 If you by any chance have seen A River Runs Through It by Robert Redford, or read the Norman Maclean book the movie was based on, this river means to me that much, although I more often bathed in it than fished for trout. This pic just happens to have been taken about the time the Redford movie was released (early 1990s). The River Białka (White) – in the photo at a Polish village which takes its name from the river – has its source in the heart of the Slovak Tatras that form the background for this scene (as well as for life or vacation) in-between the Podhale region on Poland's territory (to the right of the river) and Spisz (in Slovak: Spiš; left of the river). The mountains on the left are Belianské Tatry - built of limestone and dolomite - with the prominent Ždiarska vidla (in Polish: Płaczliwa Skała) and Havran (Havrań). Behind the Belianské Tatry rise the High Tatras, where the elements of the skyline, from left to right (East to West) are: Kežmarský (Kieżmarski); Lomnický (Łomnica) to the left of the V-shaped col; and on its right Pyšný (Durny) with its sawtooth comb; Baranié Rohy (Baranie Rogi); in the centre Ľadový (Lodowy), which – from here - seems to be the highest; Javorové: Veľký & Malý (Jaworowe); Bradavica (Staroleśny); and Široká (Szeroka Jaworzyńska) - the 'Broad Peak'; the Tatras' highest peak, Gerlachovský (Gerlach); Končistá (Kończysta) between the trees; and at the edge of the photo, obscured by the tops of the trees: Vysoká (Wysoka) and Rysy.
« PREV NEXT »

viewpoint, those Slovak High Tatras, so
breathtaking in their beauty, look better
when filmed from a distance.

Can a person follow a trail along the river
to the mountains? Such is the scenery most
often found inside the pages of a book.

Re: From my western

I am really glad you like this picture, Larry. Yes, you can walk along the river up to its sources (just a 4-km section inside the national park has no legal trail by its banks), and I hope to do it again one day :)

If you write Robert Redford and show me that view, my thoughts go straight to Jeremiah Johnston movie... epic!

Yeah, another moving movie:) that also sticks in my mind. Redford was in it while his "River" starred Pitt – people come and go but the mts still stand and the rivers run, and I find it somehow optimistic :-)
BTW Have you checked out the names? I've never been good with names and details. OK I'll never mistake Lodowy for Durny (LOL), Tomku, but I can mistake Ganek for Kończysta, or Litvorovy for Velicky - from afar:)

I used to have a friend (within the state
of Utah) who had met Robert Redford.

It was at a trout-fishing reservoir where Redford went fishing quite frequently.

My friend didn't even know it was actually
Redford until somebody informed him that it
was indeed Robert Redford.

What a funny title...

did you like the film "The river runs through"?

Sure, great place, Montana (a bit too windy maybe), not a bad time in America, seems better than the present to me.

with the beautiful Tatras rising beyond the immediate river.