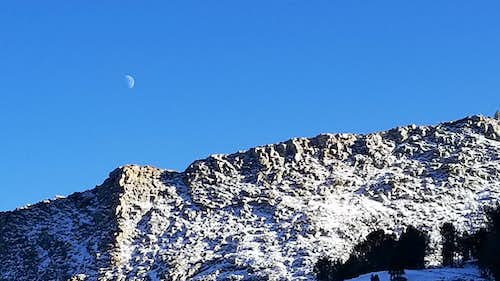 It had only been about seven days since my first visit to Thomas Peak in Nevada's magestic Ruby Mountains, and I had not expected to return a week later. But after joking with a buddy of mine Adam that we should go up Snow Lake Peak, one of the most challenging in the Rubies that neither of us had summitted, he suggested Thomas Peak instead, mentioning that he hadn't been, and that the weather was supposed to be nice. That was enough to entice me, for I knew the route was quite safe, and that the view from the top of the second highest peak in the Ruby Range had to be amazing in clear skies. The plan was to set up camp Saturday night, and then we'd head to the top in the morning, to then be back down my Sunday afternoon.

The gear in my pack would be the same as last time--two pair of gloves, my wool mittens and my standard ski gloves made by Carhartt. The down Columbia vest. The North Face raincoat. My Spyder coat that I still probably needed to replace because of its seemingly excessive weight.The North Face Triarch 1 solo tent--Adam would be testing out his Big Agnus. Medium-weight Columbia thermal top and bottom. Two pair of extra socks--Smartwool ski socks and some other compression socks. A Marmot Never Summer zero-degree sleeping bag on a Therm-A-Rest ProLite Plus sleeping pad. The cheap beanie I still wore that was from Target.  MSR Pocket Rocket. Two small MSR propanes. Two lighters. A flashlight. A headlamp. Some food. Two one-liter bottles of water. Tea. ResQLink emergency beacon. Adam's list was similar. Then finally was the Nike Dri-Fit tee and a certain Patagonia pant the company no longer produces, both of which I would be wearing to start, along with Smartwool mountaineering socks.

We reached the trailhead at the end of Lamoille Canyon's scenic byway at approximately 2:45 p.m. on Saturday. The leaves had begun changing a couple weeks ago as fall brought in the snow and mountain cold. Upon getting ready to hike, the coolness of the breeze had me throwing on the vest. Adam was seemingly refreshed by the breeze however and added nothing on top of his short-sleeve button-up shirt.

We passed a few people on the two-mile trail leading to Island Lake. They were each heading home after spending some time in the afternoon up there. We reached the lake in 30 minutes or so, and though we'd reached it rather easiliy, we could tell that our breathing was different there at nearly 10,000 feet elevation versus what we were used to at 5000 feet. Then we proceeded around the north side of the lake, traversing in a northwesterly direction up some soft and not-so-steep terrain for perhaps 100 to 200 feet in elevation gain. At approximately 10,100 feet we set up camp quickly despite the fact that Adam had only put up his new tent once before.

"Well, what do you think? Should we go up now" Adam asked.

"I mean, what are we going to do for four hours?"

"Yes, though we may be coming down in the dark. It won't be bad if we have to anyhow."

So with seemingly ample daylight and complete clarity above, we decided to make a push for the top after putting on our jackets in the increasing coolness.

It was undescribably delightful to have the good fortune of being near a group of mountain goats while ascending. But rest assured that they didn't let us see them too closely--like during my last visit, in a matter of minutes they were up and over the mountain without a trace. 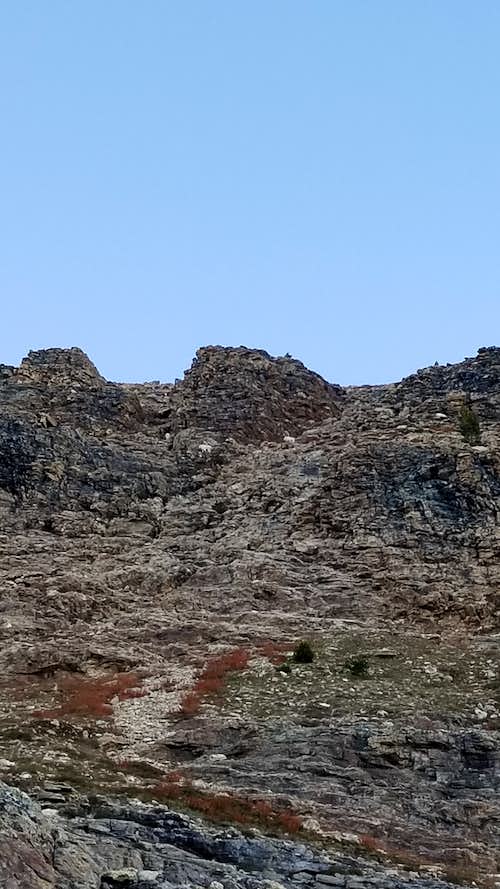 As we continued the ascent over the most rugged section of goat-traveled mountainside, we could see a glowing stroke of sunlight across the far-away peaks with darkness beneath them. This vast opening smelled of fall. The breeze had calmed while the temperature remained cool. Despite the chill in the air, though, we both began getting hot due to the exertion that came with navigating the steep terrain. I removed my coat and stuffed it in my sack while my vest continued to keep the core almost uncomfortably warm. Adam continued to wear his down jacket. Although I knew the way from last time, by no means did it make the task any easier, especially given a small sense of urgency. The last thing we wanted was to summit in the dark. We continued higher.

"My heart is racing," I said while pausing for several seconds during the scramble.

"I can feel my heart beating in the back of my head," Adam replied from below.

In our excitement to see the top, we were perhaps pushing ourselves too hard, so we forced ourselves to take a break for a minute or two on a number of occassions thereafter. 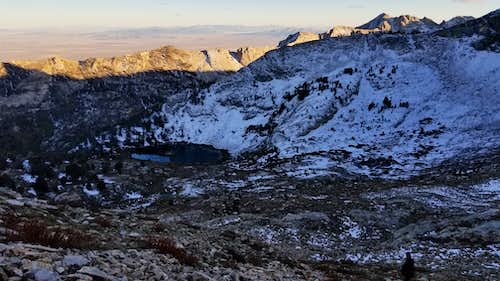 Scrambling up the second-to-last stretch of mountain before reaching the ridgeline involves crawling over large, loose rocks that seem ready to tumble down the mountain at any time. As I was leading, Adam made sure to be on one side or the other of the potential path that rocks would take if I were to accidentally roll some. Fortunately our precautions kept these in place, and soon enough we were on a shallow-enough rock field that went on for perhaps 75 yards before it leveled out onto the ridgeline. I hung a left and headed southwest toward the peak while Adam finished ascending the rock field. "Don't let me keep you from missing the sunset," he'd said, and so I didn't feel as bad about getting to the peak as fast as I could. The climb for the remaining 100 or so vertical feet then became a game of rock hopping in order to avoid postholing through the crisp snow that had accumulated in the area. This went on for approximately one quarter of a mile, but of course the exertion had been worth every bit of energy given the view upon reaching the peak.

"Did I miss it?" Adam asked regarding the sunset.

"Well you're about to," I said. He still had perhaps 40 yards until reaching the peak, and the sun was almost all-the-way hidden. I snapped photos as it disappeared below the far-away mountaintop with Adam still on the other side of the peak from the view. It bothered me that I saw it while he didn't for some reason. 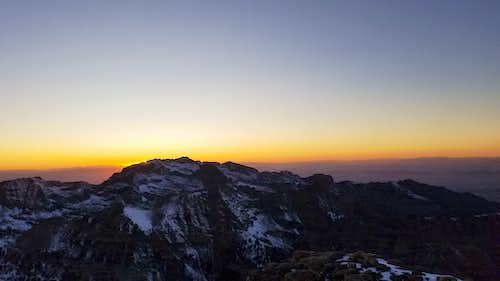 Once we were both standing on the peak, the wind seemed to increase exponentially. I brought out my coat again. It reminded me of standing up on White Mountain in Wyoming, where continuous wind from the west commonly blows at a steady 20, 30, or even 40 mph clip for hours at a time during any season.

Getting to the registries by sliding a long, flat rock to one side, we struggled to sign these two available memo pads as the wind bore down on our hands and faces in relentless fashion. My guess was we were in 25 mph winds, making the temperature in the high teens. 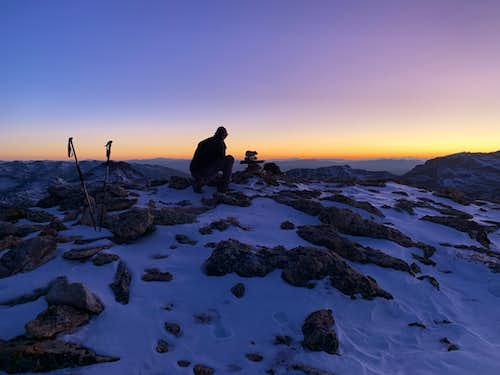 After finishing and putting our gloves back on afterward, the chill took a while to shake off.

"Well, we got a long way to go," Adam said while looking down the mountain toward camp. Indeed camp was perhaps a mile in the ever-increasing darkness of dusk. We quickly but carefully navigated the rock fields to begin descending the hardest part.

"This is spooky," Adam said as we both looked down the steep crag-like mountainside in the dark. We got out our headlamps while a half-moon shone above, but the lighting still wasn't great for seeing exactly where we needed to go.

"We'll be all right," I replied as I brought out my high-powered Powertac flashlight to get a better idea of the route we'd retrace. We quickly recognized the rock piles I'd made on the way up last time, and then we seemed to descend with ease from there, zig-zagging around small cliff-like boulder edges until we were on mostly grass. We got to camp, and then we prepared for dinner by going to the nearby spring-fed pools above Island Lake to refill on water.

It was cold by the time we reached camp again, and Adam brewed up his freeze-dried chicken and mashed potatoes with his Jetboil, retiring to his tent immediately afterward. We both had been eager to get cozy. 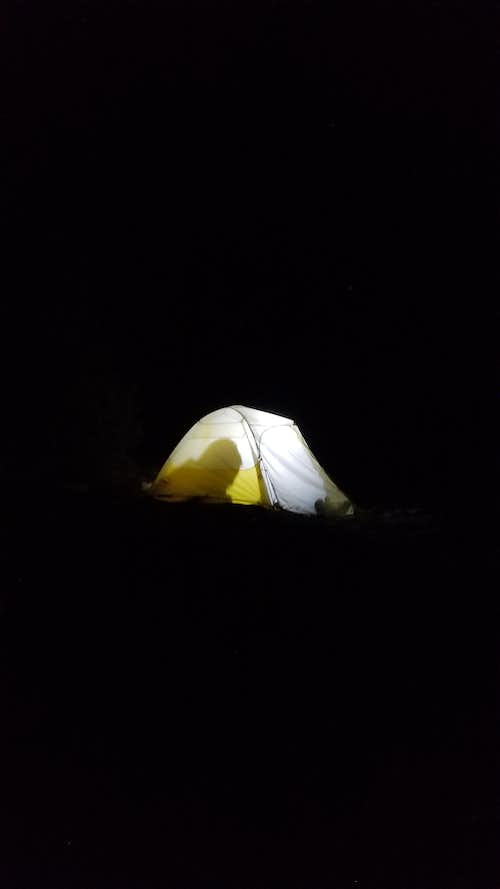 My MSR Pocket Rocket required a little more time, but I loved using the trusty stove nonetheless. The cheddar mashed potato soup was good enough for backpacking food, and so were the two packs of peanut butter and jelly crackers for dessert.

Though we both later struggled to sleep soundly through the cold and windy night, we could at least rest knowing that we'd achieved what we came for.