Unsurprisingly I'd decided upon another solo attempt at a peak I'd been wanting to get to all summer--Thomas Peak. It is the second-highest peak in the whole Ruby Mountain range, and I'd failed at a summit attempt early in the summer after realizing I was on the wrong side of the mountain to get to it. I knew that this would be different as long as the weather behaved.

It was Friday evening that I arrived to the parking lot at the back end of Lamoille Canyon. With daylight to spare, the hiking pants and boots were on with a quickness and I went speedwalking up the Island Lake trail, which I'd visited a month or so earlier. Given the fact that the weather was forecasted as "bad" in the general area throughout the weekend, plenty of warm-weather attire accompanied me. Residents of the nearby town of Spring Creek had kept meantioning late in the week that it was going to rain or snow or both all weekend, so immediately I figured that meant snow no matter what in the mountains.

After reaching the lake uneventfully, I found a nice area for base camp approximately 250 feet above on the north side. Dusk seemed to pass quickly, and light sprinkles set in just in time to realize that walking around would only be a waste of energy. It had been roughly two hours between leaving the parking lot and boiling up water in the comfort of the Triarch 1. After dinner, I read for a while until I felt the effects of the sleeping aid I'd taken earlier. Sprinkles continued to patter onto the fly in the quiet of the night while I drifted into some state of sleep. But soon enough the wind woke me. Was it similar to the wind I'd heard at Photographer's Point in the Wind River Range, I wondered. No, it was definitely not the same. It had some different chaos to it. It seemed to be coming from every direction high above me. From my north, then from the south. Then the north again, whereas that wind in Wyoming had consistenly sounded like jets coming from the northwest and going southeast. That night I'd worried about bears, but on this night, with no grizzlies in the Rubies, my concerns were weather-related.

Finally I realized that I had earplugs at the bottom of my food sack, and shortly after getting them in, the roars from above were quieted and sleep took hold again.

The alarm sounded at 04:45, but it was too dark to want to do anything, and I could hear precipitation continuing on. Peaking out of the vestibule, the mountaintops were fogged over, and precipitaiton was graupel. Better that than heavy snowflakes. After dozing off and then waking repetitively for the next hour or two, it seemed time to get things together. Light had come. I'd leave the tent, the bag, and take extra thermals, my coat, a few Clif bars and water. A light thermal top and bottom beneath my hiking pants and the vest and raincoat would do well once the climbing started. With all that and my beanie and headlamp and mittens on, I also made sure my ResQLink was present. Would the fog make me lose my way on the mountainside? Would I encounter an impasse? Was I even going to be able to find the peak? I might not find it, I thought, but I was going to find out if I was going to find it.

Deep breathing and a slow pace to start out got me warm in the 30-degree morning. The wind wasn't bad though the clouds and fog seemed to still swiftly float around. The ascent was simple hiking for the first few hundred feet, and fortunately before I started making too much noise on the rocks, the privilege of observing four mountain goats presented itself. A few hundred feet away they silently skirted the base of a cliff as I captured what footage I could.

Once the goats disappeared up above into the rugged terrain, I continued onward and upward, soon scrambling up rocky chutes and traversing natural switchbacks that continued higher and higher.

The fog paranoid me enough such that small rock piles every 30 feet or so seemed a good precaution. And I would continuously look back down toward the lake to see what the clouds were doing. There'd be partial clarity and then nothing. 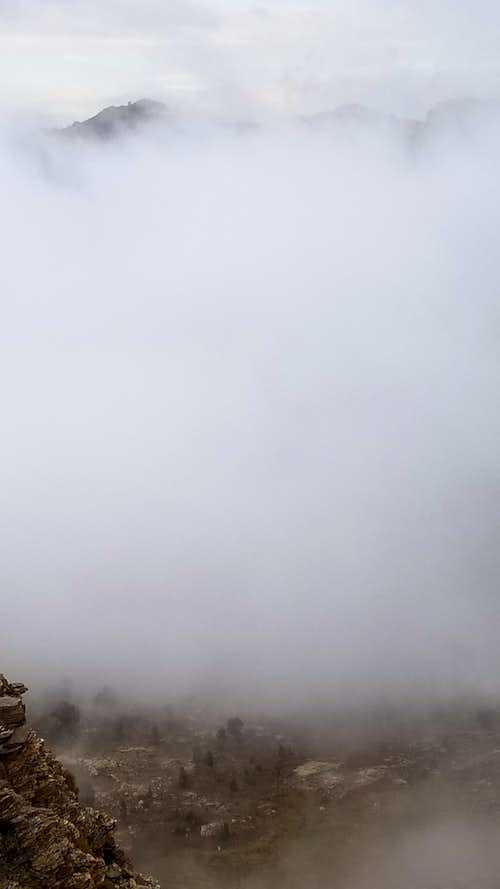 This continued until rounding over onto a wide ridgeline, at which point my real fear set in. The ridge ran in a saddle-like fashion from east to west. On the westernmost side was Thomas Peak. On the far east side was another peak, and as I looked toward that other peak, I heard a sound as if massive rocks were falling. A flock of birds flew away from the sound. Then I realized it was thunder. I quickly retreated beneath a small overhang as I considered what I'd gotten myself into. Thinking back to a favorite mountaineer of mine, Hans Kammerlander, would I end up a casualty like one of his friends who was struck by lightning on Manaslu? Minutes went by and no more thunder or lightning. What was the real chance of getting struck, I thought? I had just heard of a side-by-side driver getting struck and killed by lightning. Here I was exposing myself to the same possibility. But then I rationalized my way out of worry by figuring that the thunder had sounded from below, so there was a good chance that the real storm development was down there instead of up where I was. Perhaps it was an idiotic frame of mind, but it seemed calculated enough. If I went down, I could just as well get struck as if I kept going up. So I kept going up toward what was definitely a peak. And then a cairn appeared as graupel continued to pelt me in the face. And there beneath a large flat rock was a tupperware with a summit register. 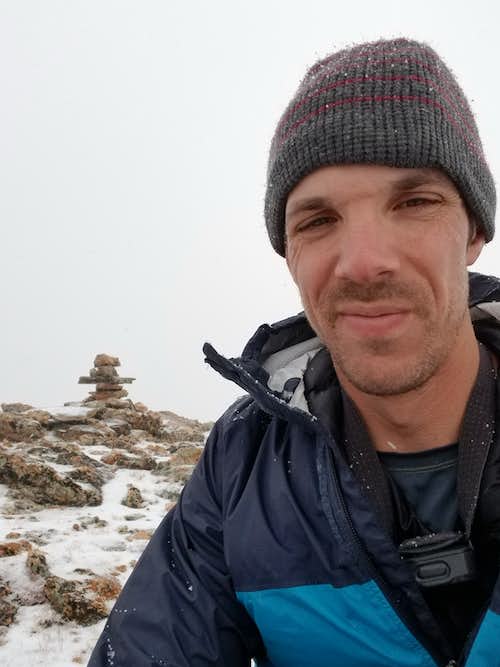 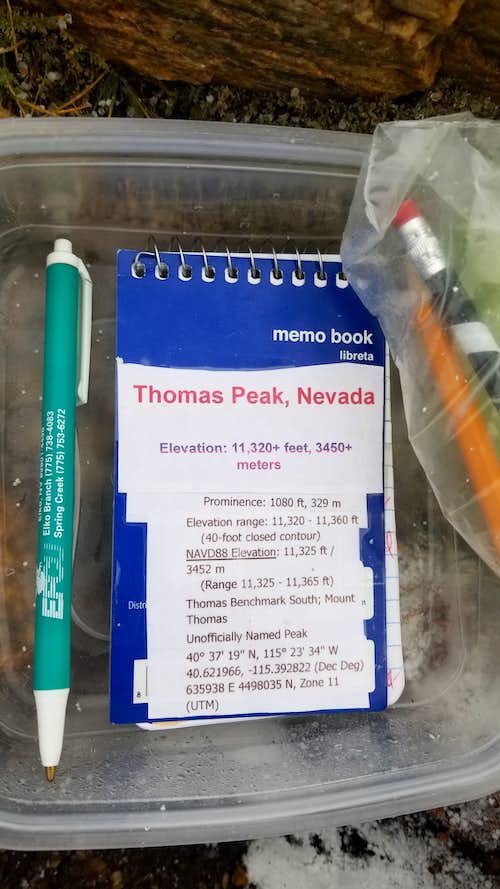 The breeze calmed and just the sound of falling precipitation overtook the mountaintop briefly. The storm front surely must've been moving fast, and it was likely gone now, but certainly there wasn't too much time to spare since conditions could always get worse again. And they did. No more than a couple minutes after beginning the descent, I saw a pink flash from the direction I'd heard that first thunder roll. Snow lightning. Moments later, in the opposite direction came a thunderous roar again, which was at least farther away, but now there was the feeling of being surrounded on all sides by deadly voltages. After staying down for a few minutes without hearing or seeing anymore of such phenomena, graupel began falling more plentifully than it had all day. The rocks and the chutes were turning white. I worried that some flash blizzard was possible. So I dropped down from 11,700 as quickly as possible while stopping a couple more times to lay down after hearing cracks of nearby thunder.

To my relief, the tent was in tact despite its walls being flexed inwards by wet snow that had accumulated on its two sides. After shaking it off, it wasn't long before all my belongings were in my bag minus the tent, which I strapped down on the outside of the pack. Thunder rolled from farther away now, which was good, but snow was coming down fast. Though it was just 10:00, it felt like late afternoon. 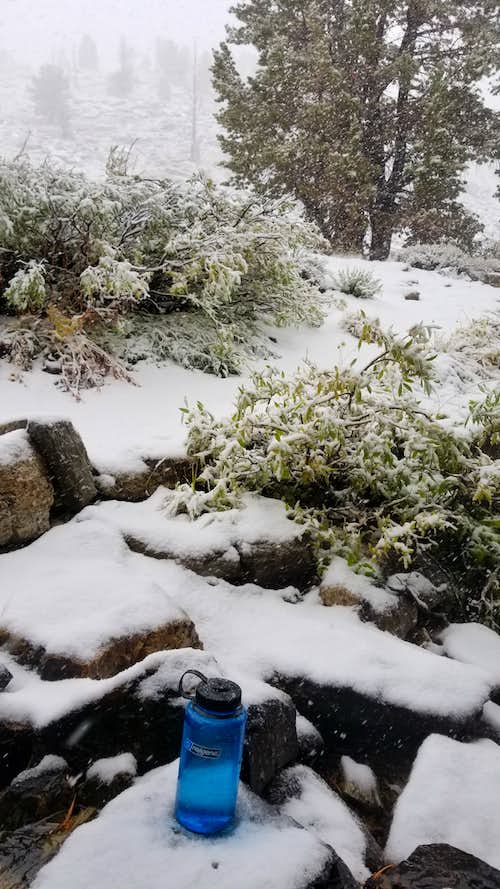 After refilling water at the stream fed by Island Lake, the descent was swift and steady despite the fact that a few inches of snow covered the trail. The clouds seemed to hug the other side of Lamoille Canyon, which allowed for a nice view of those mountainsides that were all earth-colored browns, greens and yellows less than 24 hours  prior.

It always seems to be that the hikes which lead to hazardous or uncomfortable situations are the ones that are so great, but that are so great to finish too. To feel the safety of one's own vehicle and the warmth of one's home versus the vulnerability in the wild outdoors--it is the simple pleasures that are ever so magnified by these hard times that we willingly expose ourselves to. That is partly what makes them such great times. 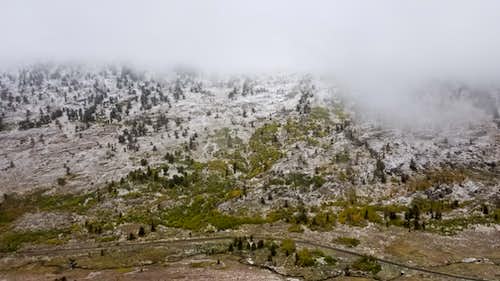 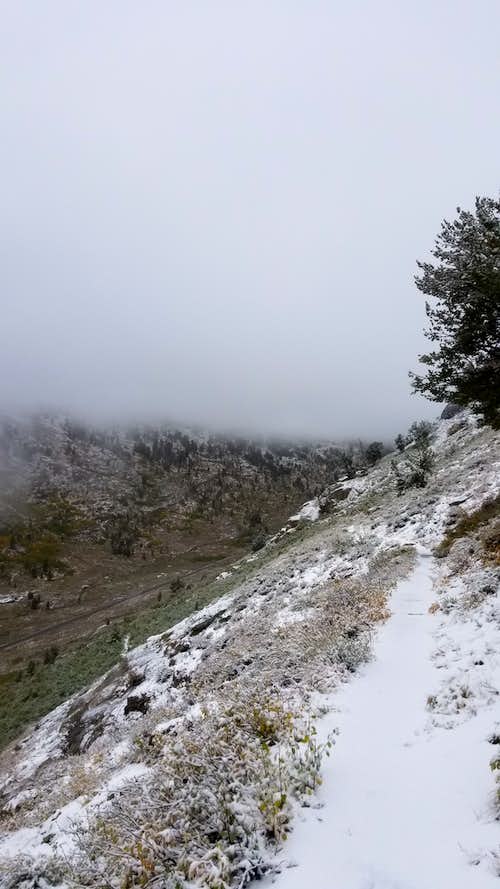