Thornton Peak and Mount Triumph dominate the view from X Mountain
Thornton Peak is the highest point above Thornton Lakes, 4 miles west of the town of Newhalem. It would be an important peak for the surrounding area if it was not dwarfed by it's higher neighbor, Mount Triumph. The first ascent was made June 27, 1938 by Lloyd Anderson, John James, and David Lind. These men were trying to make the first ascent of Mount Triumph but failed to find a feasible route which traverses between the two peaks. They returned a month later and succeeded in climbing Mount Triumph. 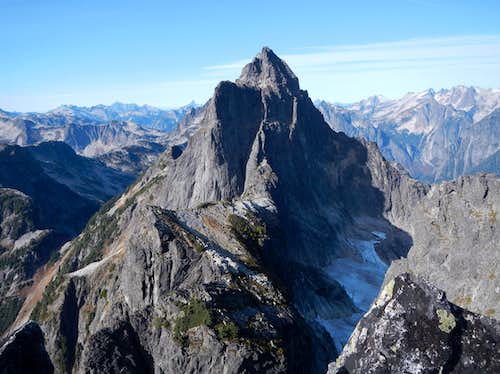 Mount Triumph seen from the summit of Thornton
Thornton Peak is not officially named, but Thornton Lakes were named after an early pioneer of the upper Skagit River, William T. Thornton. The peak carries the same name by default. There are 3 Thornton Lakes, all fairly large. The lower lake is the largest, spanning roughly a half mile and the middle lake is the smallest, roughly a tenth of a mile wide. The standard route to the summit passes by the lower and middle lakes. The upper lake is in a deep depression and not visible until you are near the summit. 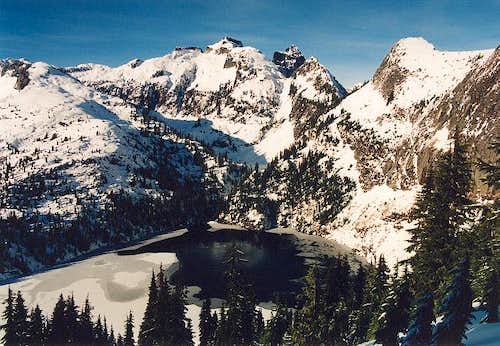 Thornton Peak in December
Thornton Peak was called “Damnation Peak” by the first ascent Party, but this is not accurate because Damnation Peak and Damnation Creek are located 2 miles to the southwest. It has also be called “Old Damnation”. The north ridge joins with Mount Triumph's south ridge while the south ridge extends for several miles. The west face is precipitous and drops 3000 feet to the north fork of Triumph Creek. The southeast ridge above upper Thornton Lake is narrow but makes for easy travel and this is the preferred ascent route. 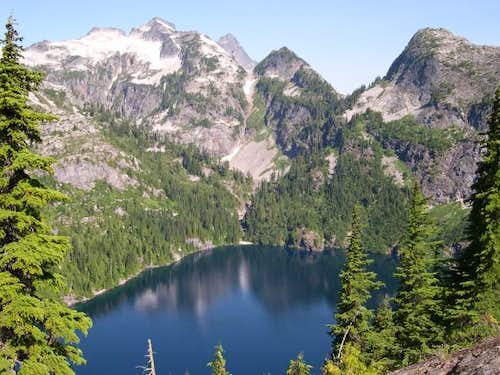 Thornton Peak in July
To reach the summit requires route finding capability and class 3 scrambling. The summit block is composed of slightly crumbly rock and there is one move with serious exposure. From the pass south of Trappers Peak, the trail drops 500 feet to Lower Thornton Lake. This elevation must be regained on the way out. Total mileage and distance are 5500 vertical feet and 13.5 miles round-trip. There is a campground near the outlet of lower Thornton Lake. Side trips to Trappers Peak and X Mountain are highly recommended. 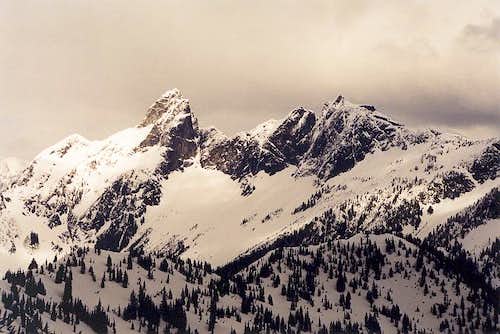 The West Faces of Triumph and Thornton in March
There was a register as of October 2015 which was placed in 2003. Thornton seems to get roughly 3 or 4 ascents a year.

Short Description:
To reach the southeast ridge you must walk the old road, that leads to the trail, which goes over a pass, drops down to the lake, and then follow the climbers path to the middle lake, and then ascend the steep gully to the col. For our purposes lets call it Thornton Col. 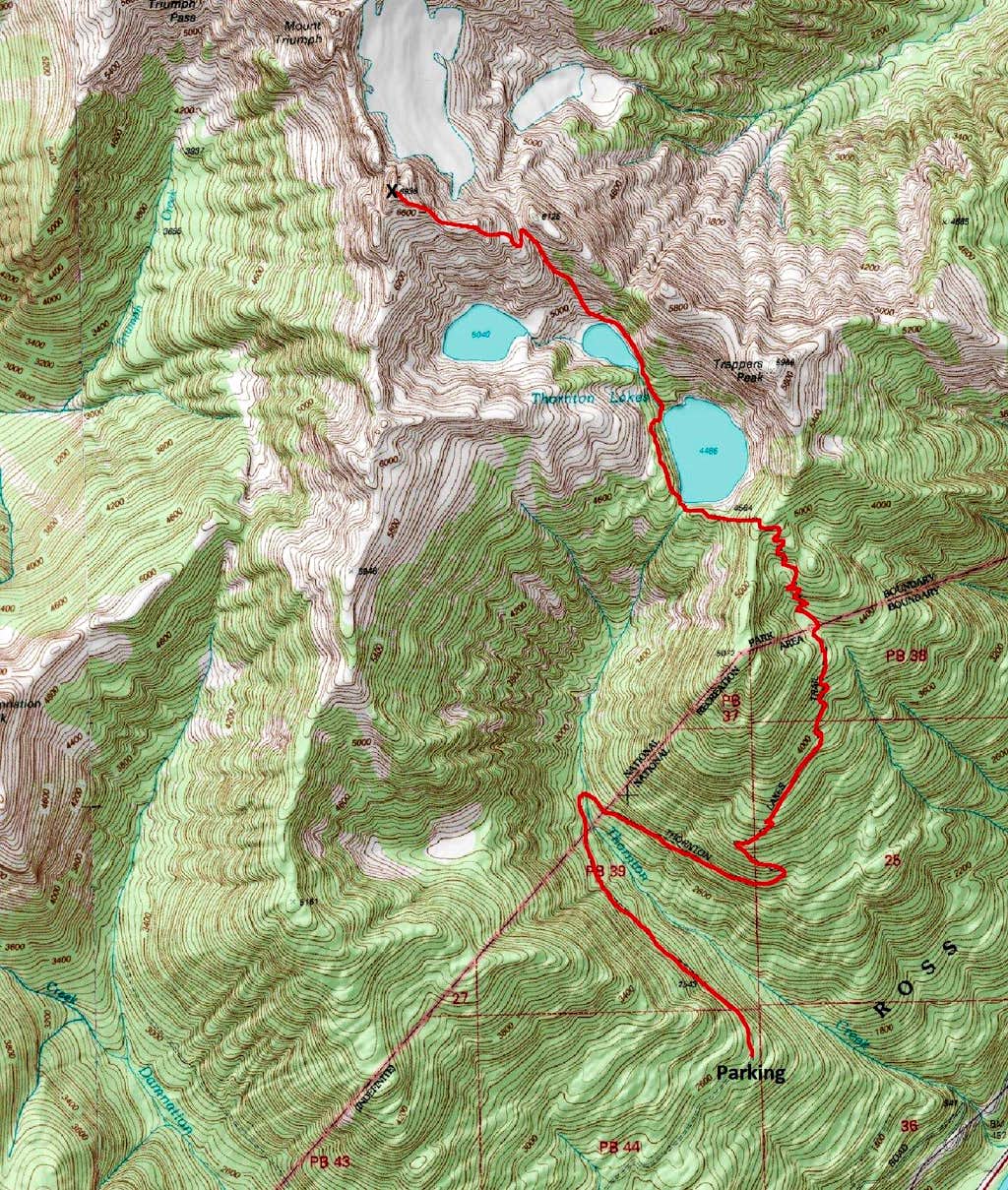 Route Map
Long Description:
From Thornton Lakes parking area, hike the old road for 2.3 miles and then ascend a steep trail 1800 feet to the junction just below the pass. The right fork goes to Trappers Peak. Turn left and go over the pass and drop down 500 feet to lower Thornton Lake. 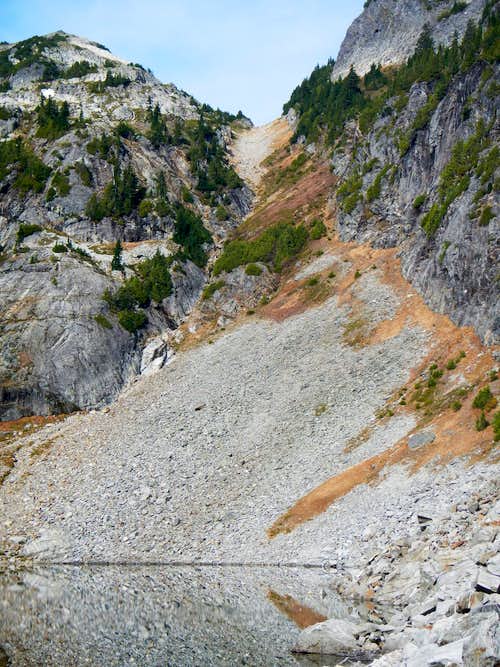 The Gully Below Thornton Col
The trail continues over some large talus near the outlet of the lake to the camground. From the outlet a boot path contines north near the west shore of the lower lake. It rises and falls several times to avoid cliff bands.

When you reach the inlet creek, cross to the east side of it and continue northwest inside the small gorge to the middle lake. Traverse talus along the east shore of the middle lake to access the obvious gulley. There is a faint boot path along the eastern edge of this gulley but it can be hard to spot on the ascent. Likely you will find it higher up.

Ascend 1000 feet to Thornton Col and turn west. Pick your way through minor cliffs and slabs to reach the upper southeast ridge. You can keep it almost entirely class 2 if you take the time to look around. At 6400 feet the ridge narrows.
There is one spot where you will have to scramble down 20 feet of class 3 to continue along the ridge. After that, there are several spots where following the very crest is not ideal. Look for a ledge along the right side to avoid a small prow and then a blocky scramble around the left side to avoid another prow. With any snow, these obstacle might all be very different.

Summit Panorama
The final scramble looks imposing from afar but appears easier the closer you get. The rock has a rotten appearance, but is not as bad as it looks. There is one narrow step-across or crawl-across move with serious exposure on both sides. Watch for large loose rocks on the summit!

Take Highway 20 eleven miles east of Marblemount or two miles west of Newhalem if you are coming from the east. Watch for the turnoff for Thornton Lakes Road on the north side of the highway. This road has a bad reputation because in the past it was very rough. It has been re-graded and now any 2WD vehicle should be able to make it. Just exercise caution and watch for the occasional pothole. From the highway drive 5 miles to the end of the road and park at the Thornton Lakes trailhead.

A Northwest Forest Pass is required at the trailhead.

Pick up a permit at the Marblemount Ranger Station if you plan to stay overnight. They also have a voluntary climber's registry. There are only 3 camp sites at Thornton Lakes so arrive early if you want a permit on the weekend. The campsite at lower Thornton Lake has a composting toilet. Be sure to hang your food up and away from bears, goats, and rodents.