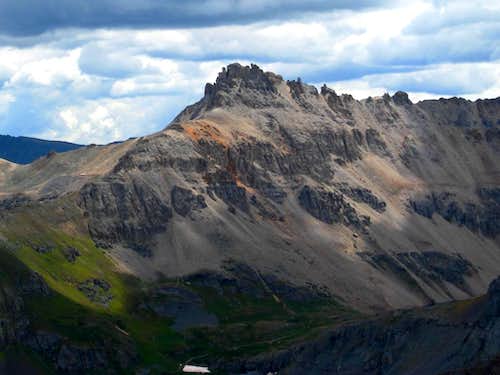 At 13,481', Three Needles is the 266th highest peak in the state of Colorado. It is among thirteen other 13ers in the quad, the most notorious being Dallas Peak. Visits to any of these summits are rare in comparison to the traffic seen on nearby Mount Sneffels. This is a special area, however, to those who know it, and Three Needles is one of its finest. Three Needles was a favorite of the San Juan Mountaineers (ca. 1920s) for its rock route possibilities. There are several relatively simple routes to the top as well, but the peak has an imposing appearance that makes a reasonable ascent seem unlikely.

With convenient access from highway 550, it is surprising the peak gets as little attention as it does. The most convenient ascent follows the East Face up to the south ridge just shy of the summit and finishes with a fun but brief scrambling section. The peak combines well with other 13er objectives to the north, making for a semi-loop hike by dropping off the ridge to the east to return to a parked vehicle whenever desired. Three Needles reflecting on the surface of Porphyry Lake "T 11" seen to the southwest of Three Needles View to the west with sun hitting the Needles