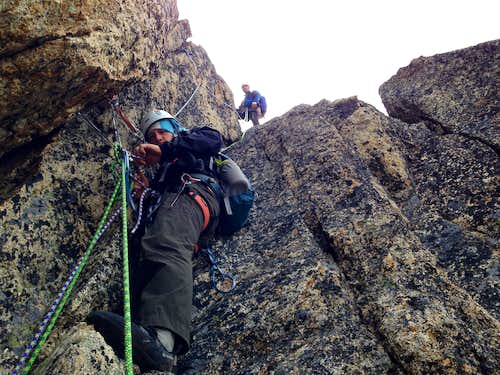 Third climber can take photos
Conventional wisdom has long held that two person alpine teams are the most efficient, however, with the right rope system and tactics, climbing in a party of three does not need to be any slower than a party of two.

Additionally, the ropes, rack, stove kit, and tent are shared among three climbers, easing the load for everyone. John Varco told me his three person team used a two person Mountain Hardwear EV-2 tent on Annapurna III. One climber slept in the middle, feet in the vestibule. Using leader and follower packs takes even more of the load off of the leader and makes great sense for three person teams, as the group gear is split between the two followers.

An extra body if someone gets hurt increases everyone’s chance of survival. Three person teams can also foster a team dynamic that foments harmony as well as having a third brain when it comes time to make difficult decisions. It's also the case that each climber has to lead fewer cruxes. This can bring the size of big climbs down a little bit. 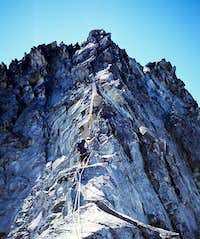 Leading on a doubled half rope
Lead in blocks of four to six pitches. Swinging leads takes too much time as ropes have to be untied, retied, and restacked, and leader and follower packs need to be swapped.

Belaying off the anchor
Rope systems. Use beefy half/double ropes. My personal preference is 8.5mm , Sharp rated ropes in 50 meter lengths. 50 meter cords are lighter and easier to manage than 60 or 70 meter cords and are rarely too short. Unless climbing in an area with established rap stations for 60 meters, they make great sense for alpine, ice, and rock climbing. Following on a single strand of a thick half rope makes me feel good and wholesome inside. Having done the three person thing on the 4,000 foot North Face of Big Four in winter on twins, I will never do it again.

If only short technical sections are expected, a single 60 meter or longer half rope can be doubled, making for an even lighter kit. The leader ties into the middle of the rope and the followers tie into each separate strand.

Establish a solid, equalized anchor above the belayer, and attach the belay device to the power point. Situating the belayer below the anchor will make rope management easier. A belay device with auto locking capabilities is a must. The Petzl Reverso and Black Diamond ATC Guide or similar belay devices are good choices, as well as being good for rappelling and belaying the leader. The auto locking feature allows two followers to be simultaneously belayed independently. Use a thick, round stock locking carabiner that the ropes run over. Petzl Attache is a good choice. This makes the ropes easier to pull and saves effort.

Using a Single rope as a double

You mention that a single rope can be doubled. Would you belay on both stands or just one? I ask because a single rope is designed to take the force of a fall on just one strand and doubling up might increase the shock of a fall.

Single as a double

If I were planning on using one rope for a team of three and folding it in half, I would use a half rope and the leader would clip only one strand through each piece of pro. I wrote "a single 60 meter or longer half rope can be doubled". I can see how that could be construed as a 'single' rope, whereas I meant one half rope. I suppose one could also use a single rope and would simply clip only one strand through each piece, just like one would with a half rope.

The enjoyment you get from having a companion at belays, the joking and good times are well worth whatever (surprisingly small, if everyone is thinking of efficiency) delays might exist. I guess this is my favorite way to climb with friends. Good article!