Spring mountaineering season is coming to the cascades, my favorite place in the world for corn harvest! I figured I'd make a post about our epic traverse last year where we climbed/skied North Sister, Middle Sister, South Sister and Broken top in a single push. We were going to add Bachelor as well, but yeah... 4 was enough by the time we got to the car! I know many people do this route in the summer, but I figured there are plenty of masochists who would love some spring/ski beta on this. The traverse was done on 5/6/2019, while the road to Bachelor was closed, adding in some more pain and suffering. Overall, it has been one of my favorite traverses, as it took a ton of planning, effort and a bit of luck. Our plan was to traverse from North to South, from Pole Creek to Bachelor parking lot.... The reasoning was that we would be skinning & booting the north facing shots, skiing the south facing lines. 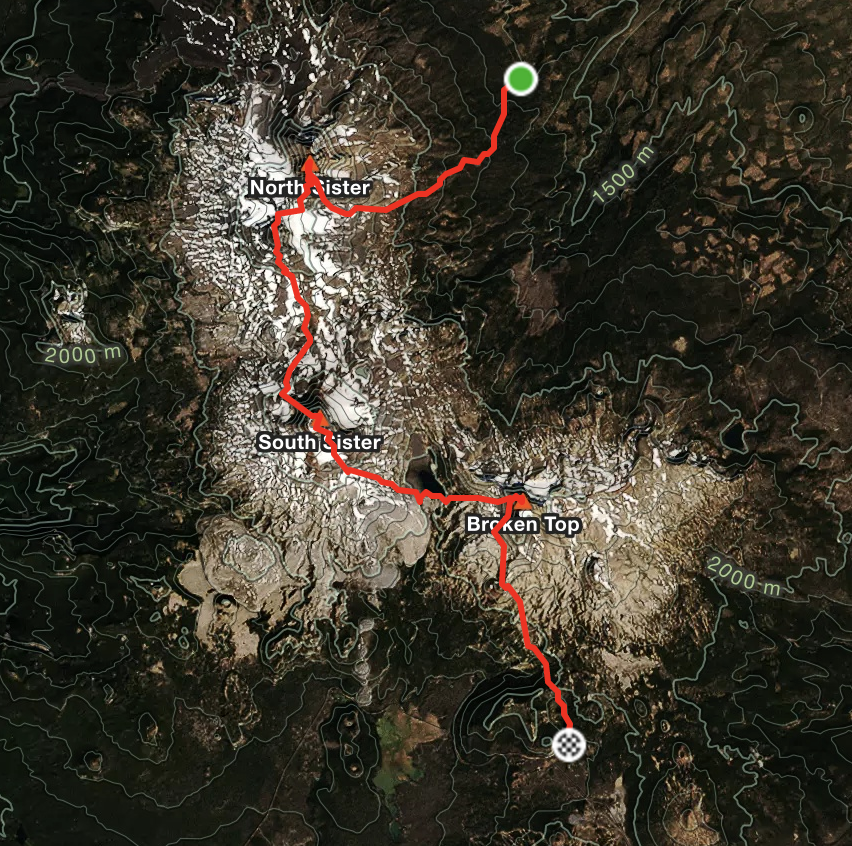 In total, it was around 14,000' of elevation gain and 26 miles, with some technical climbing on North Sister and Broken top. We used no ropes, as we were going for speed. There were 4 of us, 3 skiers and a splitboarder(!!!) so teamwork was super important. Teammates: Anthony Marra (me), Will Jones (Splitboarder), Danny Bradley (Rad Trad Dad), Joel Pavek (His intro to the Cascades). We skied on 65mm underfoot skis, with Joel having a beefy 85mm dynafit ski! He loves the downhill a bit more :)

After stashing a car at Bachelor parking lot, we started from Pole Creek Trailhead at 2:30AM and made our way towards the east ridge of North Sister. At first, it was frustrating to hike through the woods without skins through frozen mud, downed logs and breakable crust in the dark. Eventually, we found solid snow and started skinning... Although it was tough going. We made it underneath North Sister, and could see the beautiful terrain we were surrounded by under a full moon. We took a quick break to get our bearings straight, and started moving again. Our first mishap begins: Leave it to the splitboarder to drop his board down the slope! As he was recovering his gear, I went down to help him while the others continued on. I gave him the standard lecture about not being an idiot and moving faster :) which gave him fuel to catch up with the others. Although he is a very fit and confident mountaineer, it can be tough to have a splittie on the team.

We skinned underneath the east ridge (south side) until we reached a semi saddle between North and Middle sister in the dark. Once on the saddle, the first signs of sunshine started to appear and we were psyched! Sunrises in the cascades are the best. I highly recommend catching a few this year :) 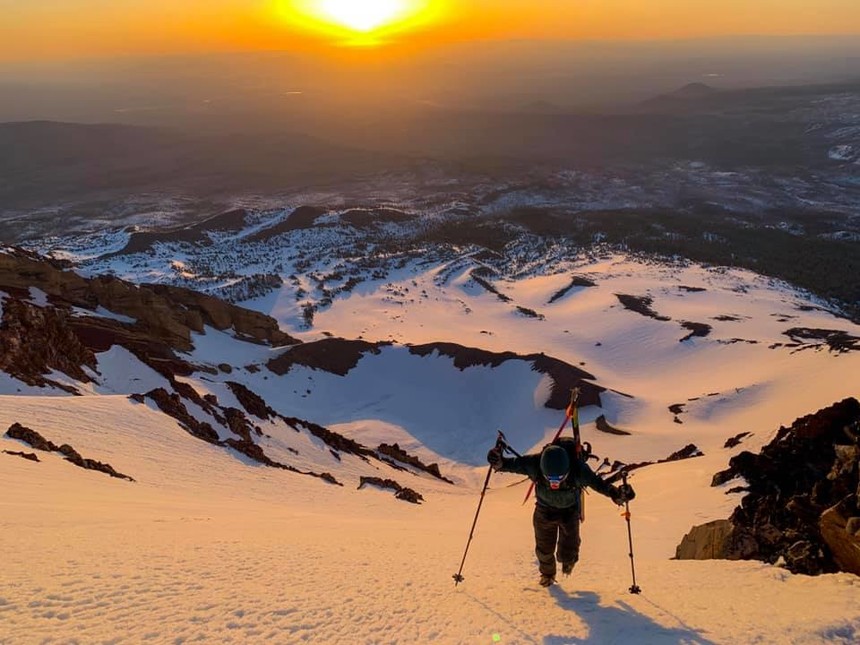 Route finding became tricky, but eventually we skirted through the various cliffs and started feeling confident that we were on the right path. 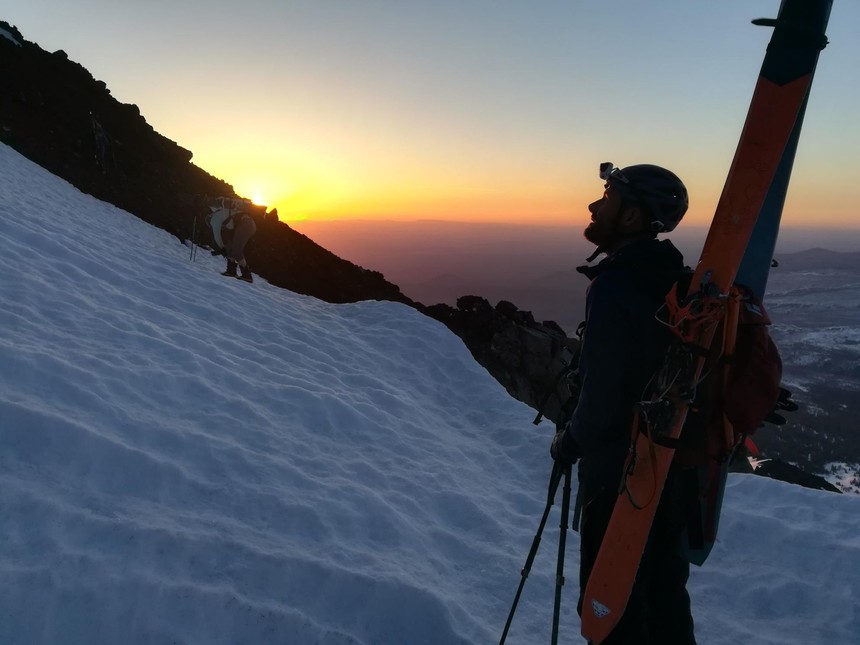 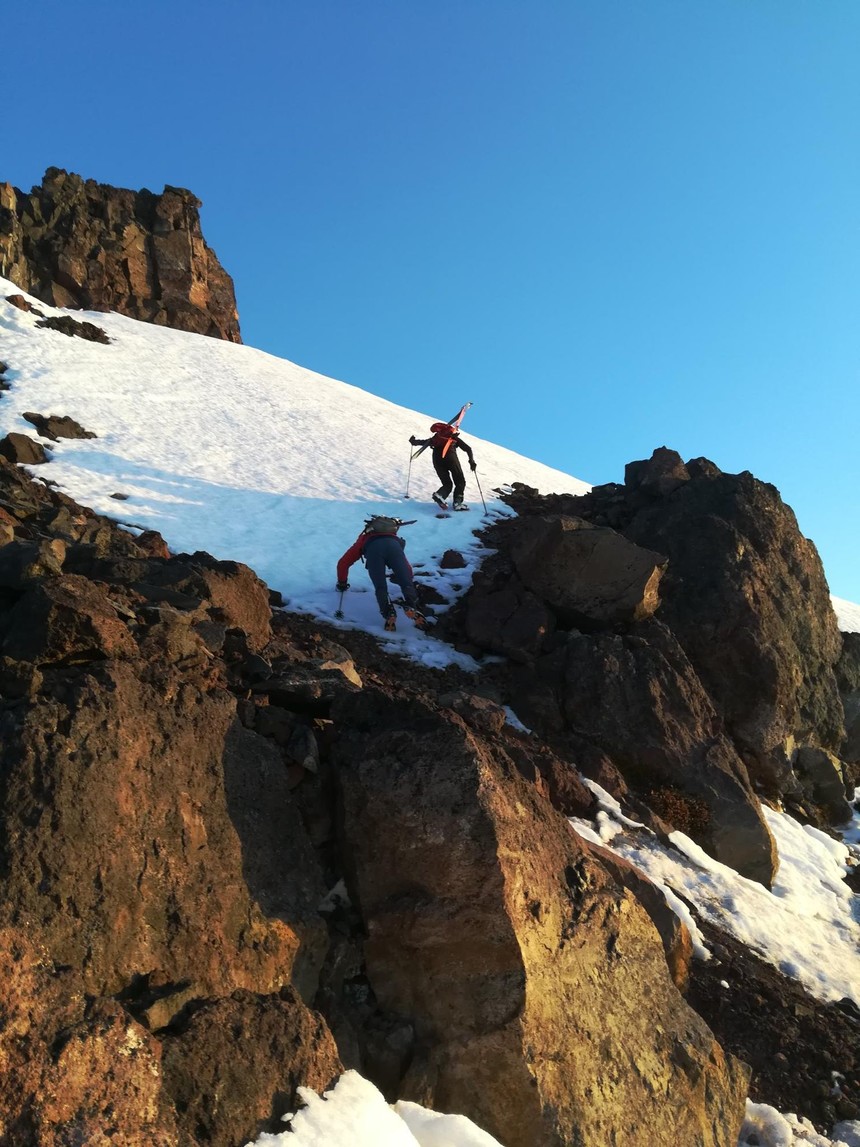 Looking back at our intended route was intimidating to say the least! Just a few more volcanoes to go... 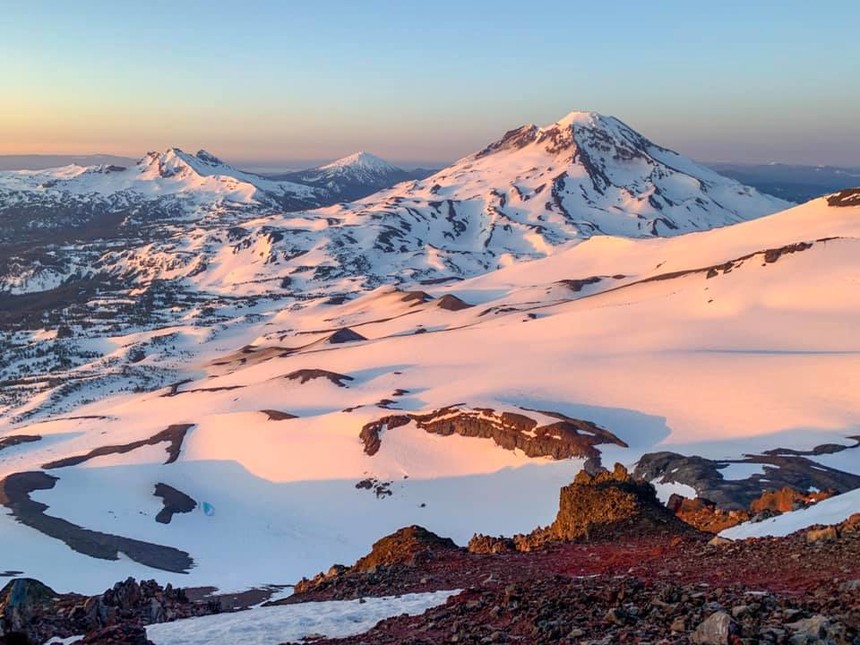 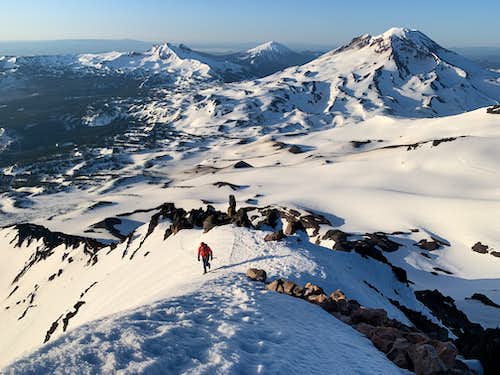 We soon found ourselves on 'the Terrible Traverse', which didn't seem so terrible... However, it was incredibly exposed. Not the place where you'd want to think about falling, but we felt confident unprotected, as snow conditions were firm. 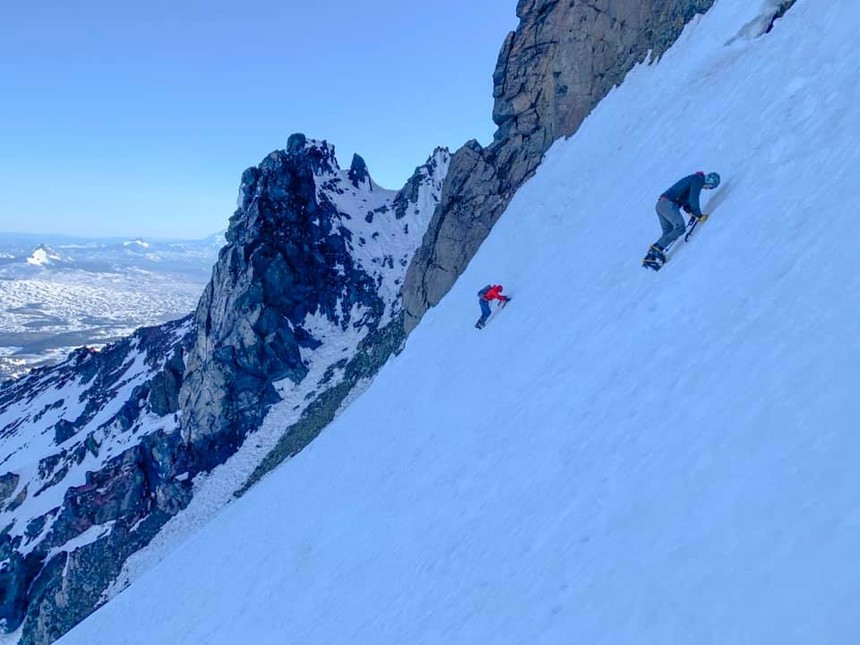 The trad dad of our group hated the traverse with a passion, even though he is confident leading 5.12 on trad(??) Not sure how that works.... but this always happens when we climb together, even though he is eons above my climbing ability level. He freaks out on weird terrain. He started second guessing himself, and decided it would be a brilliant idea to climb the face above us... Which looked like 200' of chossy 5.8 bullshit. Normally, I wouldn't think twice about his decision, but these are volcanoes which are not known for their superb rock quality.... I started telling him to get off the wall before he became too committed, which he then turned to me and said in anger: 'ANTHONY, YOU LISTEN TO ME... I AM A GROWN ASS MAN'. At this point, the entire group burst into laughter and we were shaking our heads in frustration. Sure enough, some crumbly boulders caused him to rethink his decision and he down climbed back to the traverse :)

We made it underneath the final headwall, which looked in good condition, but a little more stout than we expected. Tougher than it looks, trust me. 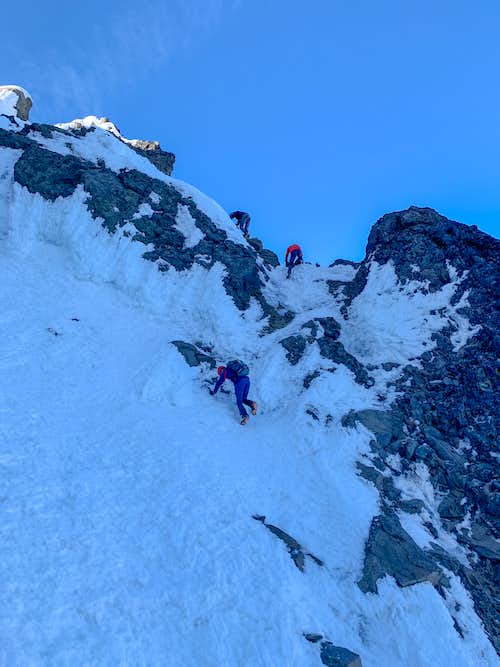 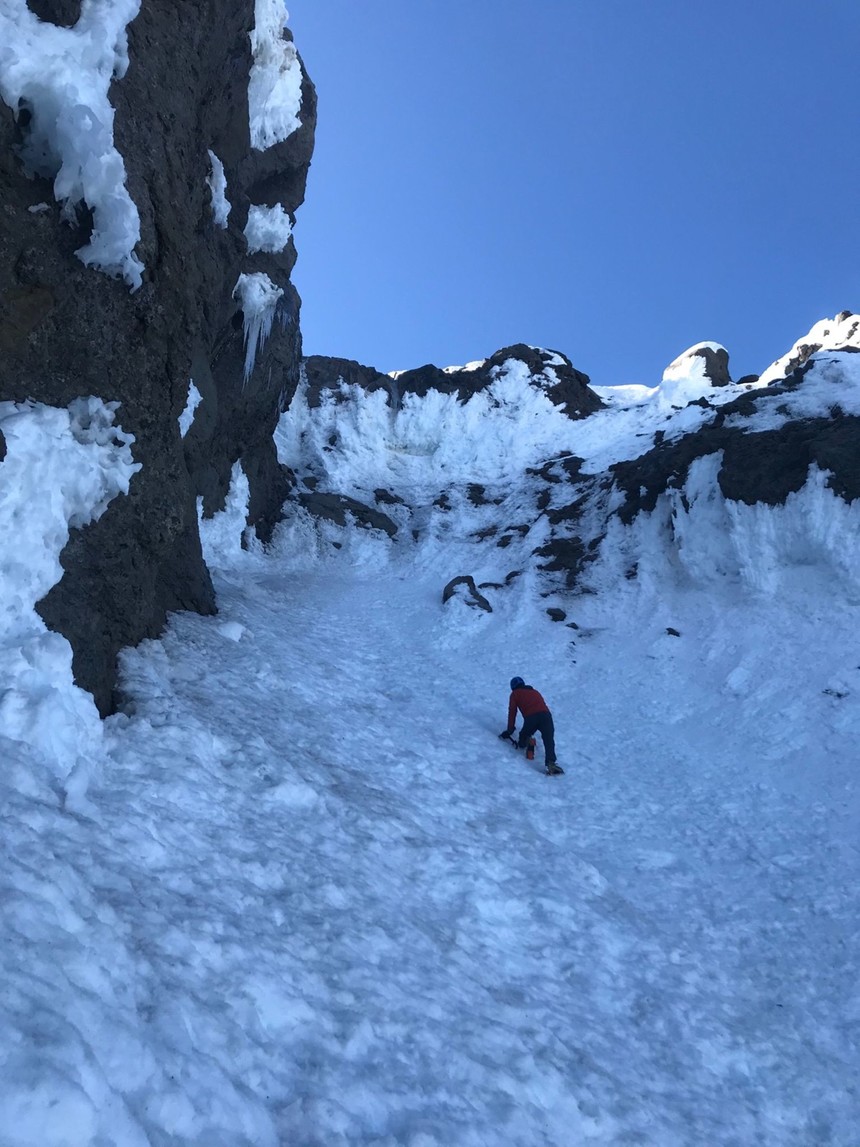 One member of our party had only a piolet axe and a whippet, while the others had two appropriate tools. The less equipped had assumed the day before he wouldn't be climbing to the top of North Sister, as exposure was not his jam. However, I managed to find an easy route through that went lookers right at a smooth WI3- to a nice 5.6 climbing on a reasonable rock ridge. After watching us, he felt much better and we all made it to the summit ridge. From there, it was smooth sailing to the summit! We were all smiles on the climb. 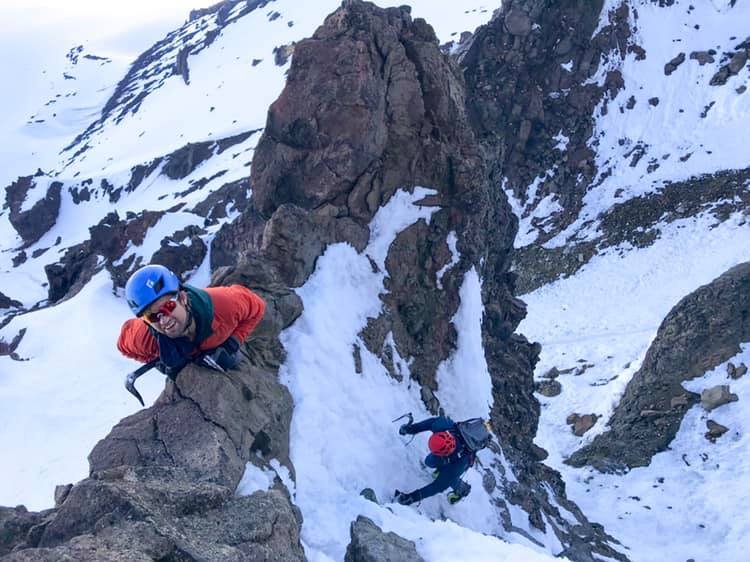 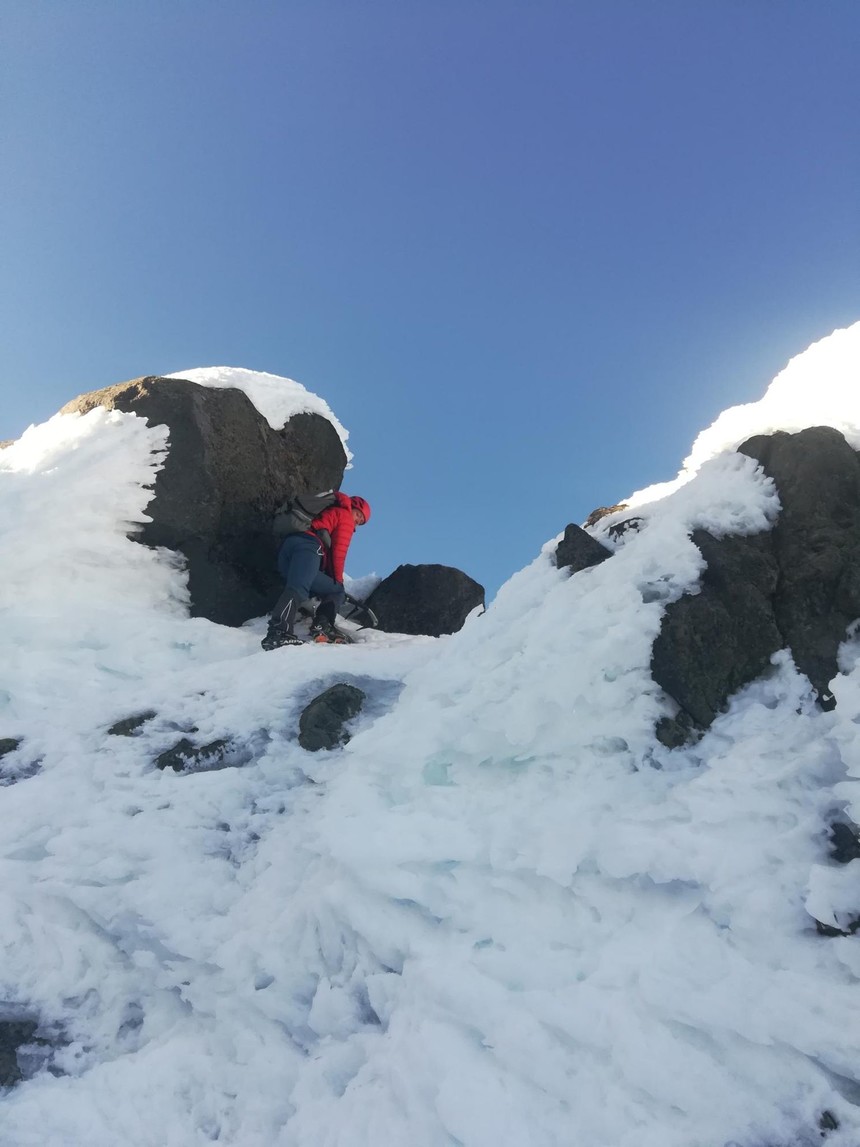 It was easy to retrace our steps and back down to the saddle, where we had stashed our skis. 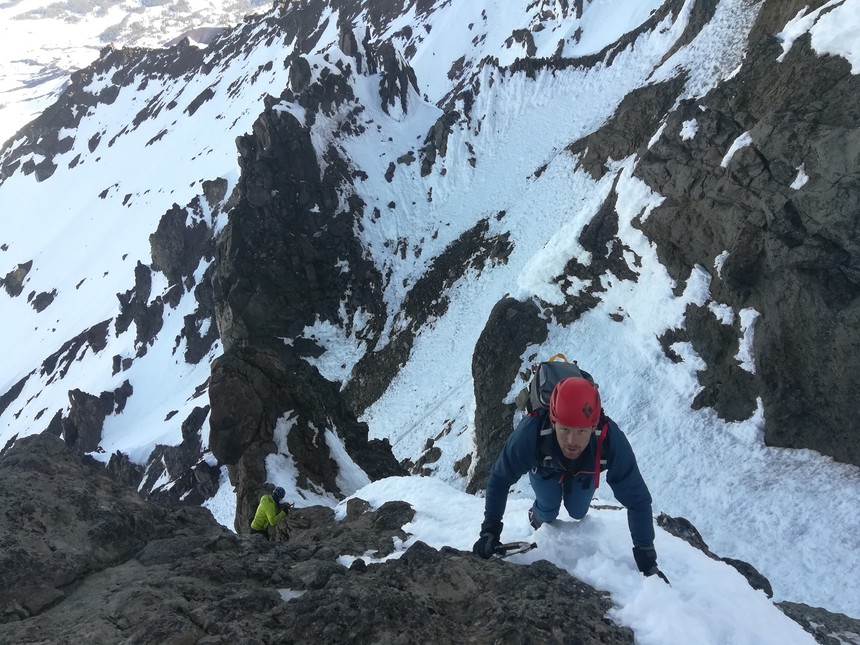 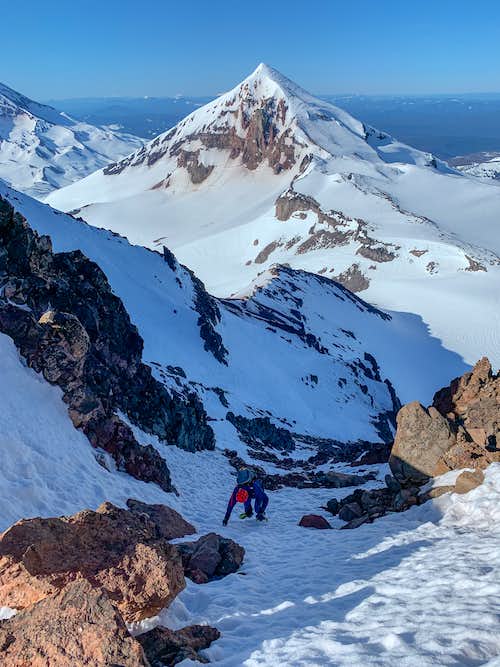 Once we reached our stash point, we skied down a nice and icy south facing chute to the Hayden Glacier. We figured our initial skiing would be on ice, so we tried to keep it under control with our skinny skis. 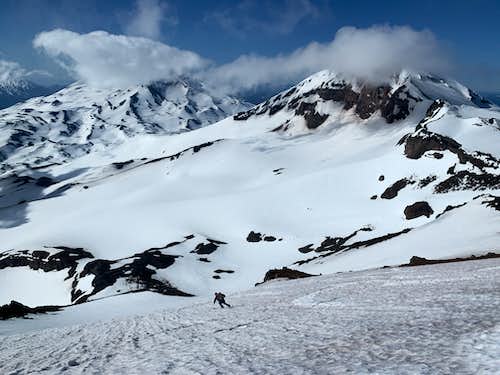 From the Hayden Glacier, we booted up the north ridge of middle sister, which was incredibly mellow and fun. From the top of middle sister, we searched hard for a ski route down the south side. Our teammate, Joel, picked the perfect line that went continuous all the way to valley! As a bonus, the corn harvest was starting :) 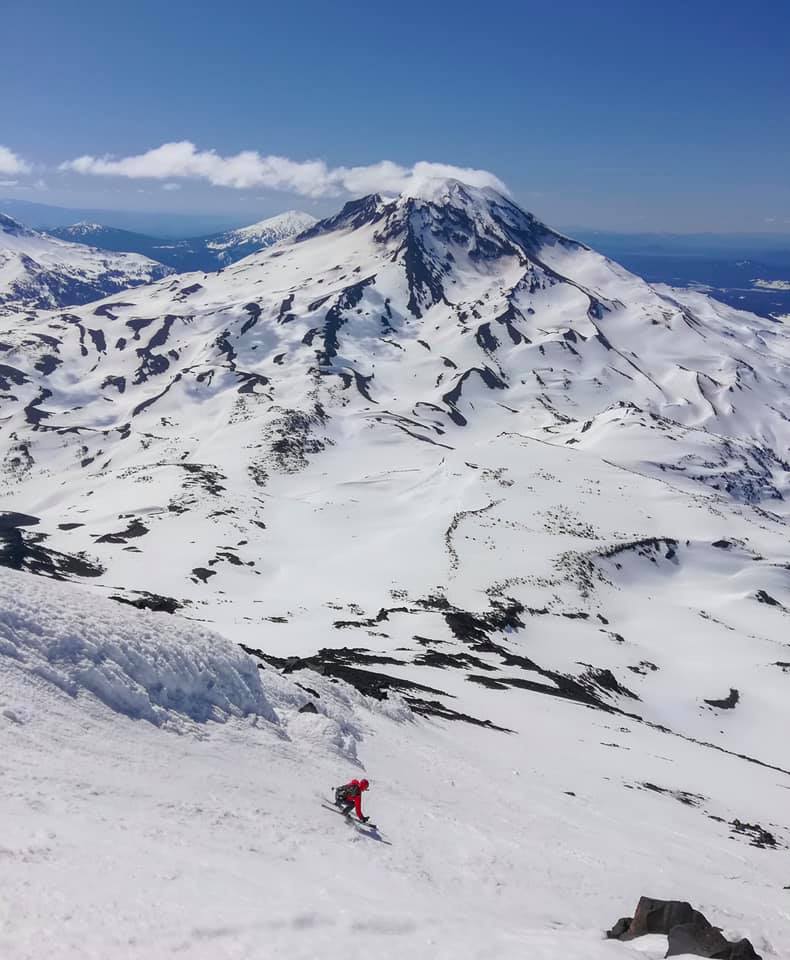 We were happy with such good skiing, but we knew this was going to cause some issues going down South Sister, as it was getting HOT! However, just as we started to get worried, the wind picked up into the 30s and kept our surfaces cool... Talk about luck :)

We had two options, the more 'true' line would have been up the north ridge of South Sister, however, we did not like the way it looked, with tons of hang fire. We opted for a more unknown, but reasonable looking NW ridge. Turns out, we made a good decision... It was mellow, fast travel and we could focus on conserving energy. 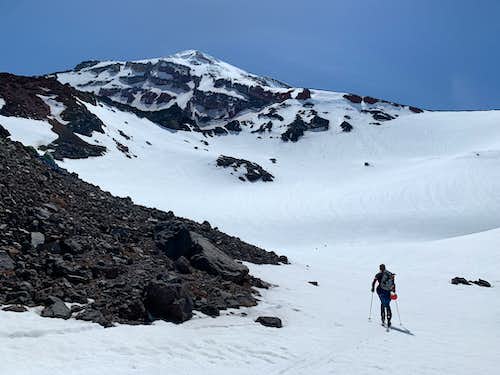 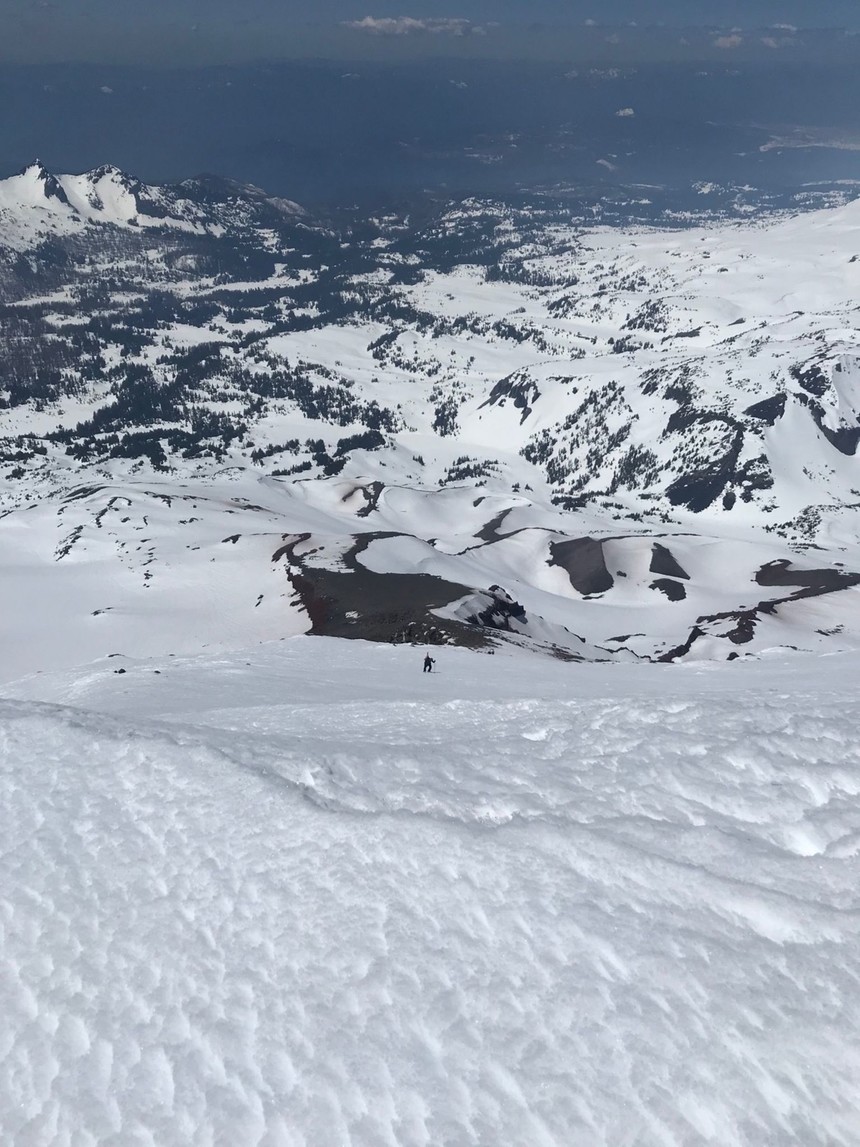 A few thousand feet later, finally to the top of south sister!​​ 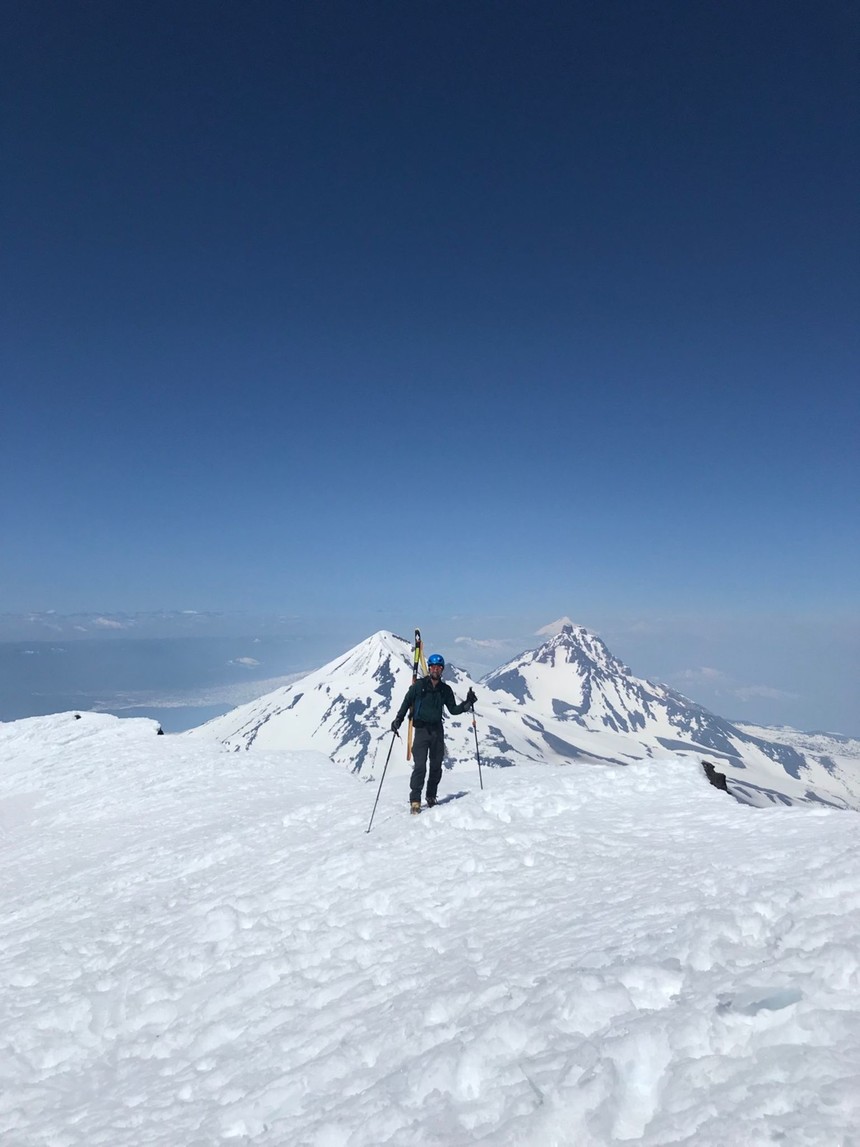 By the top of the South Sister, the whole team was hurting. Joel and I were getting our 2nd wind, Danny was becoming tired, and the splitboarder was.... being a splitboarder :) We skied the S/SW line off South Sister, also in great corn down to Green Lakes. 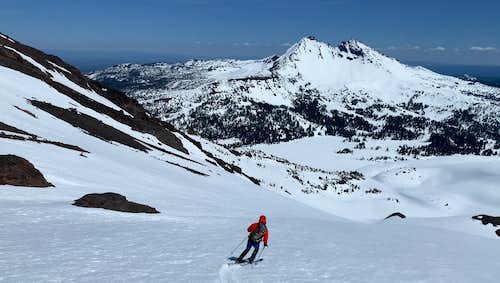 Each of us had carried 1L of water to this point, in which we were in need of a refill. Green Lakes had some water available in spots, although we carried a stove just in case. From this point, we were still stoked on hitting Broken Top and Bachelor. Broken top was an incredible climb and ski. Looking back on the 3 Sisters from Broken Top. 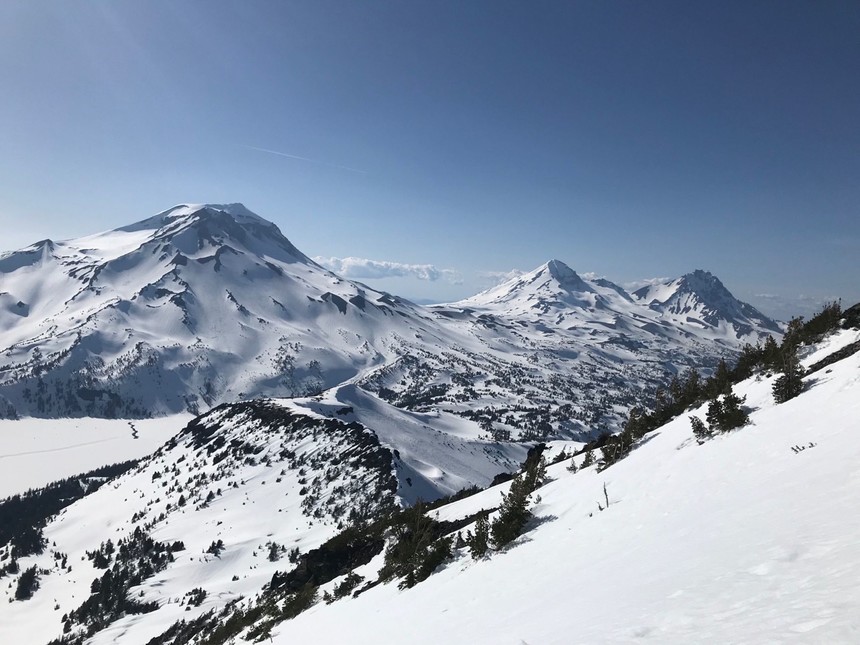 We approached from the West and reached a saddle between the summit and a smaller sub summit. From there, it was easy but exposed 4th class climbing to the top. 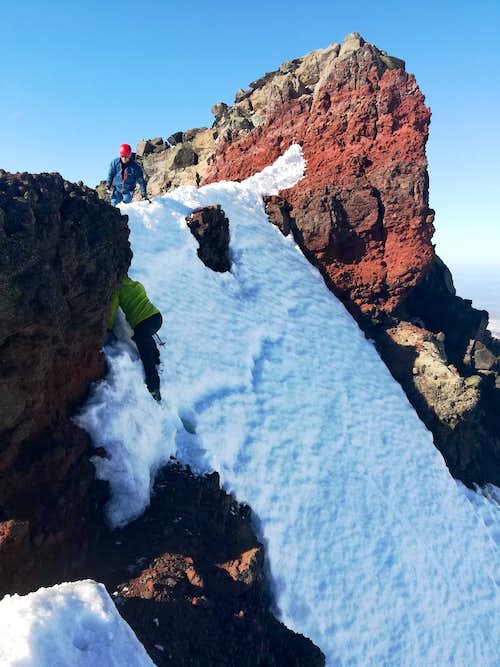 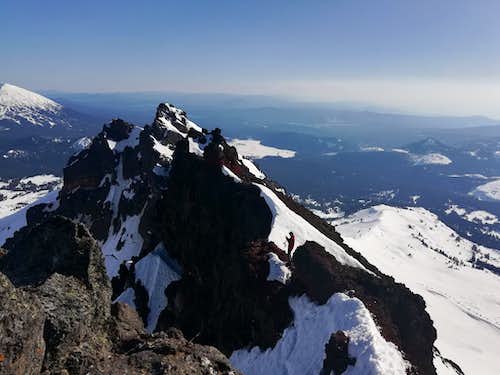 We skied down the southwest face, bumped over a minor ridge on the south side and then did a combination of skinning & skiing all the way to Todd Lake. After broken top, we shit-showed it. Joel and I continued forging ahead, while Danny and Will lagged behind. Once near Todd Lake, Joel and I split up as our only goal was to make it to the car, and we felt confident about where to go. Plus, we had little desire for companionship at this point. As a consolation prize for my stupidity, my entire leg punched through the edges at Todd Lake, and I had a wet walk back to the car. Eventually, I hit the paved road and let out a sigh of relief, even though I had a painful walk back in carbon boots. I made it to the car, with Joel roughly 20 minutes behind, as he had apparently waited for me above Todd Lake. Danny and Will eventually showed up, and a giant group hug followed. We were beyond stoked about how our traverse went. With one last look at the groomers going up Bachelor, and the sun setting, we laughed, called it quits and drove into Bend to gorge ourselves in greasy Mexican food! ​

I hope this trip report gives motivation for others, the sisters are incredible and there aren't many places where you can link volcanoes in that fashion. Overall, the climbing is not very hard, the skiing is moderate and the adventure is supreme. Enjoy the spring!