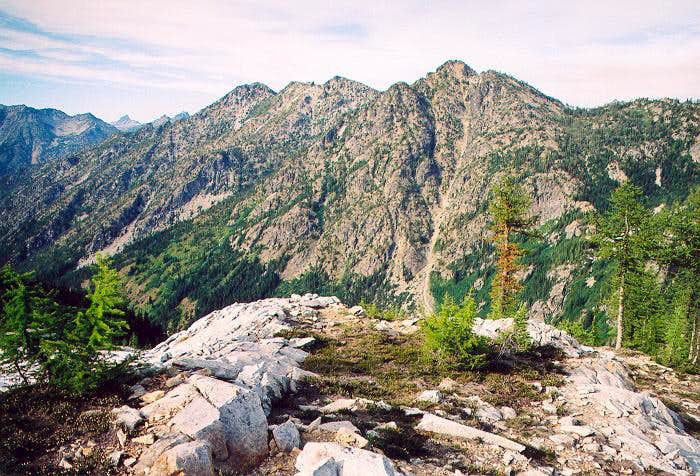 Two prominence peaks northeast of McGregor BM. Dr. Roper claims the FA of the one on the left ("Three Wives", Pk 7450, 730P). The one on the right with the long gully has recently (per recent email exchange with Roper) been christened "Kwann Peak" (Pk 7350, 470P) owing to its being at the head of Solleks Creek. Solleks means "angry" in the Chinook language. Angry Mountain was up for consideration until Roper discovered there is already an Angry Mountain in the state (in Lewis County). Another definition of solleks is "hostile." But, in the end, owing to the peak's proximity to Three Wives and the fact that John is happy with his current wife, Kwann (meaning "happy") was chosen. Mountain naming in the Cascades often uses synonym and antonym themes. And general wittiness is the norm, especially when originating from the mind of a rhino. Photo taken July 29, 2006.
« PREV NEXT »