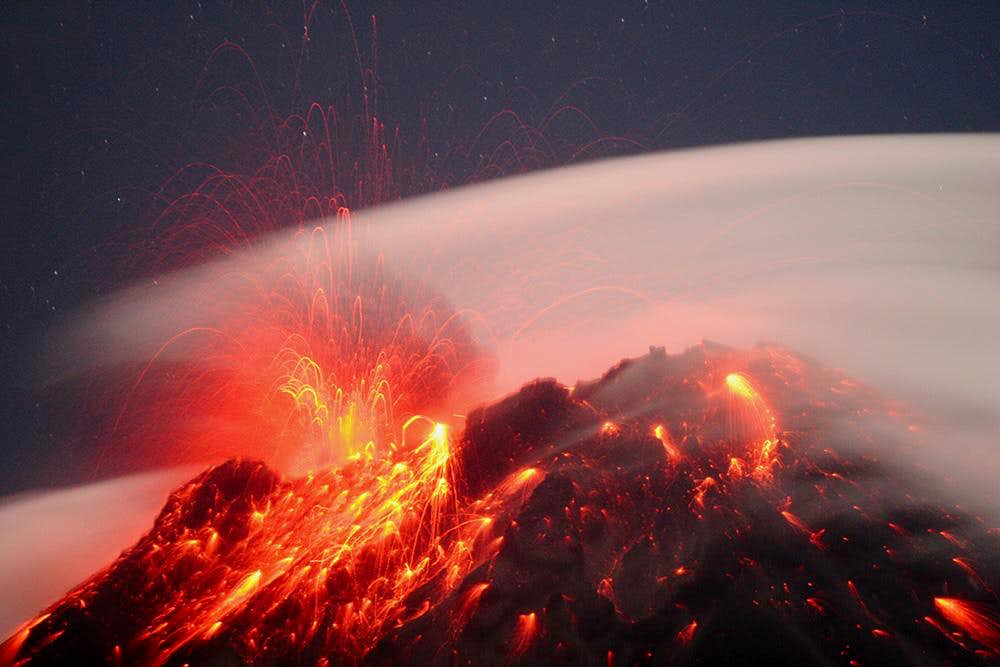 Tungurahua's deadly eruption. I decided to head for Ecuador, driven by my love of mountains and an insatiable urge to travel. I got more than I bargained for when I arrived, because I discovered that the Tungurahua volcano, located around 80 miles south of the country’s capital Quito, was about to erupt and was spewing dense smoke and lava. I approached it from the west, which was said to be the good weather side, since the clouds generally roll in from the east/amazonas. The road I was on ended at Puela, a little town at the western slopes of the volcano. Night fell and the clouds dissipated and I found myself staying up all night to observe and to take pictures.I took this picture using a Canon D20 and 70-200mm combination, with an exposure time of around 15 seconds. It was a difficult shot to take, thanks to the humidity and the fact that ash was falling fairly liberally around me: my camera is now worth half its price! The next morning I started my walk along the flanks of the volcano to reach Banos: there had been a road, but much of it had been destroyed by lava flows. The villages I passed were semi-deserted and the vegetation was covered with ash: all the time what really scared me about the volcano was that it was so quiet....no explosions, and my fear was that something was building up. Time, I told myself, to get out of here! The following night the villages of Bilbao and Penipe suffered heavy damage and those of Chilibu, Chogloctuz and Palitagua got wiped out.
« PREV NEXT »

Wow... what an experience!