After thesuccessful trek to Purander, we planned on going to Tikona. This time, onlyAmit agreed to come; Amol had some work. 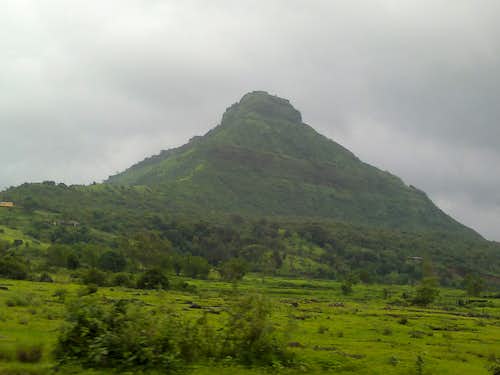 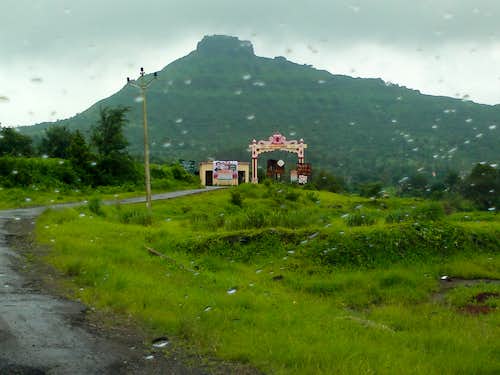 Started raining
Being nearby, Amit came to my place @ 1 pm after lunch. We drove in his car via Pirangut, Girivan road, which goes to Lonavla. This was an area I had never visited, but had heard of. Fort Tung and Tikona were forts which were divided by the backwaters of Pavana dam. It was a sight to behold! When Amit showed me Tikona,
I was like - how are we (including Yuvaan) going to climb THAT? But, to our surprise, the trail was not that steep except the last section. 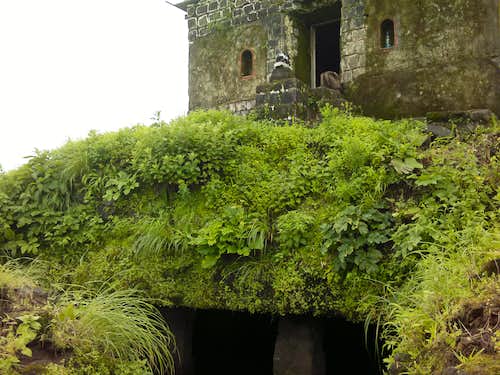 Pond below temple
After havingpassed through villages like A, B, C, we arrived at village Tikona - a village by the same name, at the base of the fort. We were surprised to see a BIG group- a family that had come there. One ladywas surely in her eighties! Well, only a few members of the family climbed the fort, while the senior citizens stayed back! 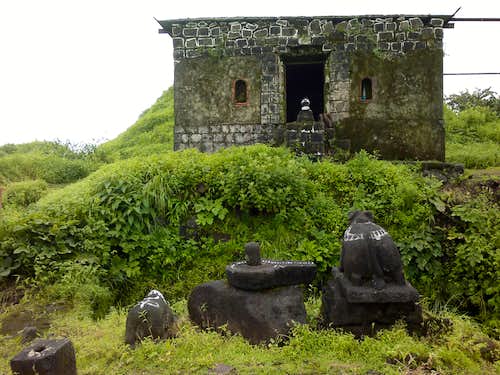 Yuvaan was all gung-ho @ going in front, and exploring the trail. I had to actually shout to make him stop, when I no longer could see him. We passed an entrance door, past a grinding wheel - which in earlier times was used to grind grains. 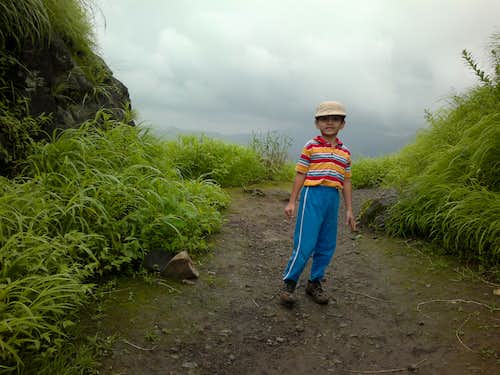 Yuvaan posing
A little further, there was a temple besides a pond where a sadhu (baba) lived. Amit had
met him multiple times. He was not there, and had gone somewhere since the last few days. We hiked up higher, to be confronted with the steepest fleet of
stairs I had ever seen in my entire life! 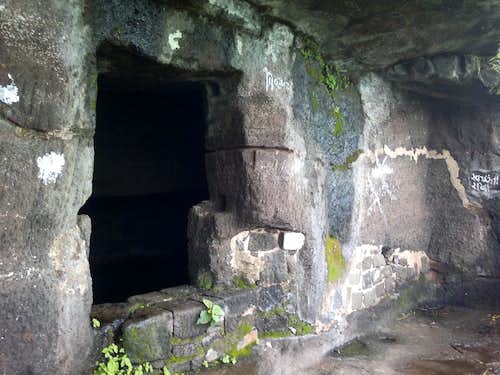 Caves on the fort
When I exclaimed, Amit assured me that the next fleet was even more steep! Well, the incline didn't matter much, but the moss and the water from the rains that make them extremely slippery! I was cautious for Yuvaan. Mid-way on the stairs, there were steel cables hanging
from the side-wall, which was a little reassuring. Yuvaan was all excited, and I was telling him to be safe! We all managed to climb up the stairs safely, with Amit holding Yuvaan's hand sometimes. What I feared was - descending them! 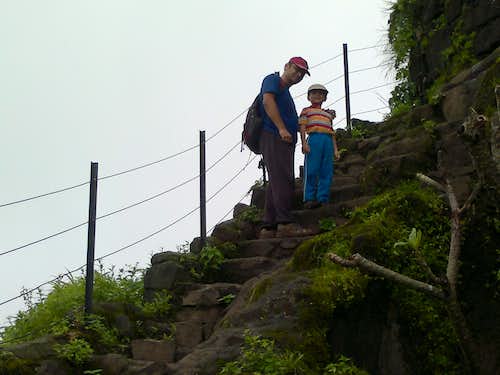 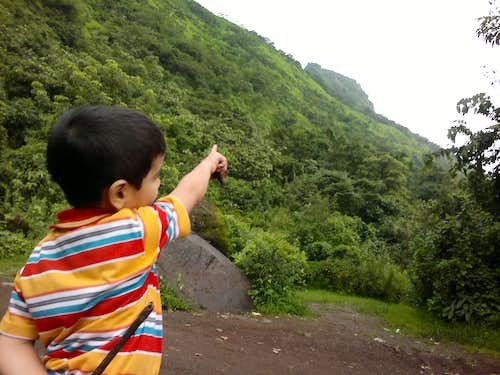 See, that is where we came from...
We reached the top, paid our blessings @ the Shiva temple (omnipresent on all Shivaji forts),and went all the way up to the top! From the top, we could see fort Tung at a distance, across the glistening backwaters of Pavana dam. Looking at the almost pinnacle-like summit, we gathered it would be a tough one to climb. The base of that fort - Tungi village was 19 km away from Tikona village. 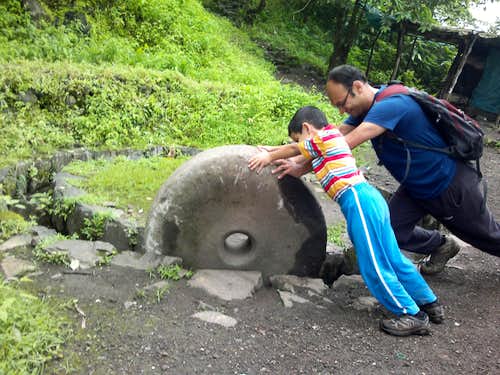 Trying to move the mill.. 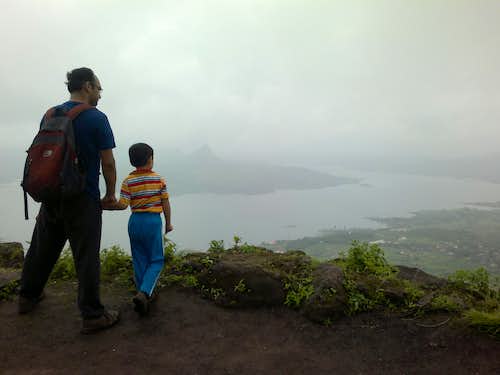 On the way down, we met up with a local whose group (of boys) had taken up the responsibility of maintaing the fort, and doing regular cleaning on it. He told us that he sometimes cleans the steps everyday, to avoid moss accumulating on them. There were incidents when he told people NOT to go up the fort at times as late as 5 pm, they don't agree - and then he has had to go back in pitch dark when it gets 10 pm, and they don't return. 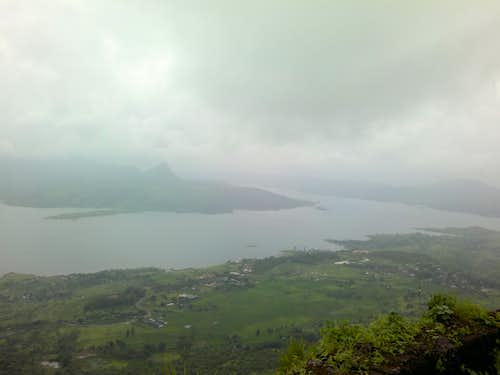 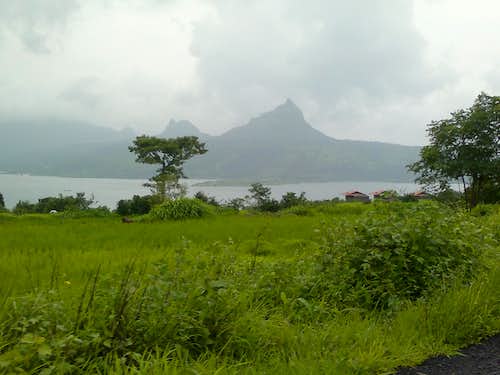 Tung
This fort was under the leadership of Netaji Palkar, who kept it as a prison fort. The reasonthis was built was to keep an eye on both the valleys that it could monitor. If something happened / enermy attack etc in the Maval region, then message would be conveyed via a syncronized and coordinated "light (flame) movement" from Visapur - Lohagad - Tung - Tikona - Sinhagad - Torna - Rajgad. The region after Tikona is the Mulshi region, and Rajgad happened to be the capital of Shivaji, who used to rule from there. Later, the capital was shifted to Raigad, in Konkan region. It was amazing how the Maratha warrior had developed this system among the multitude of forts he held, won, lost, captured during his lifetime. This fort, Tikona, being a prison fort was kind of kept a secret, and it finds little mention in history, compared to other prominent forts like Rajgad, Torna etc. 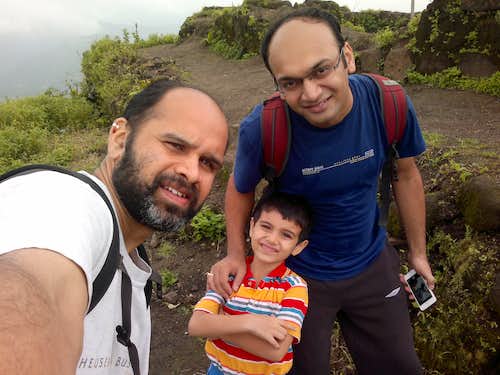 Selfie!
Another stupid thing happened - we forgot to take petrol for the stove! So, we were unable to kindle it, and have our share of qarm fluids at the top.


For his exemplary efforts, I gave him some money as financial support to keep the practice of maintaining the fort for trekkers like us. 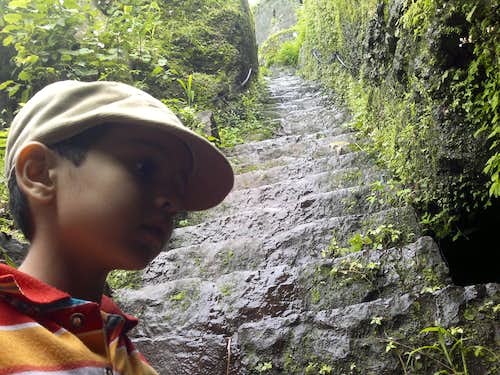 The STEEEEP stairs!
He descended ahead of
us, and we descended with utmost caution. I told Yuvaan to do side-stepping on the wet steps, while holding my hand. We all descended safely, and had a refreshing tea and biscuit break at a place frequented by Amit. Yuvaan had gotten a little tired, so he dozed off on my lap while we drove home. Another trek, another fort done. At this pace, it would still be a few years before we finish off all 375 forts in the state of Maharashtra!