I headed out from Racetrack Road at about 9:30 a.m. on an unseasonably cool morning. This was to be my second attempt at the peak. My first attempt failed a few years ago when my hiking companion experienced vertigo and we had to abort. This time I was determined to summit solo.

On both occasions, I had difficulty visualizing the route as it is described, so I downloaded some GPX tracks and attempted to follow one of them on the way up, which more or less headed straight across the desert from the turnout where I parked. I had the choice of this route or another which took a more northernly approach and I arbitrarily chose. This proved to be a terrible idea. The route description here on SummitPost could not be more different than my own foolish experiment, as I spent extraordinary amounts of time making doubtful rock climbing moves on near-vertical faces between 7,000 and 8,000 feet. Several times I reached an outcropping that I simply could not get above and I had to descend, traverse, and try another approach. By the time I got over the ridge and reached the blissfully ambling saddle that leads to the summit, my hands felt like sandpaper, my shins and forearms were bleeding, and I was genuinely wiped out. It was truly one of the hardest "hikes" I have done -- and I have day hiked much bigger peaks (e.g., Whitney via the Mountaineer's route, among others).

On the way down, I followed a more northernly track around the front ridge, scrambling down with little difficulty and I soon found the use trail. It was a completely different hike. 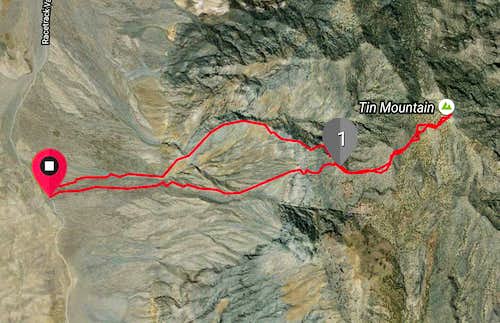 My ascent time was 5 hours exactly over a distance of 4.1 miles. My descent time was just under 3 hours over less than 4 miles. It was an interesting lesson in route finding, to be sure.