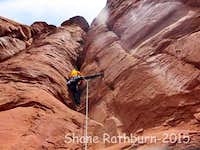 1st Pitch
Three Tiered Spire (aka Three Sisters) is one of the more remote and lessor climbed objectives in all of Sedona. This spire clearly reminds you of the Three Gossips in Arches National Park and Three Sisters is a much more appropriate name than Three Tiered.  This is is a gem of a climb and location not to mention the ancient cliff dwelling hidden behind the spire.   Until you actually lay eyes on it from the summit, you cannot imagine such a beautiful, secretive and protected location for an old home site.  Once you rap the north face, you get to explore this dwelling site up close which makes for an unusual climbing bonus. Tip Toe is the only published climb to date (2015) on this spire and runs between the east most summits/towers.   The route offers up good wide crack climbing by Sedona standards.  Directly to the east of Three Tiered Spire is “Land of the Spires” which includes quite a few interesting formations. This is as magical as it gets in Sedona.

The start of the first pitch is by far the crux lead.  It involves stemming up a very chossy right facing finger corner with little in the way of dependable gear. The middle of the first pitch climbs through several large and precarious chock stones. The final part of the pitch involves much nicer rock that starts out in a chimney and moves to hand jams that lead to a fun squeeze below the ancient pack rat midden.  I found it best to combine the second and third pitches to make a stellar tower pitch by Sedona standards. Enter the squeeze above and work your way out to pull the exposed roof.  Some easy off-width leads to an easy but aesthetic chimney (truly climbing between the two most eastern towers). The exit mantel atop of the east most summit is fun. Easily jump up to the real summit for the finish and gear belay.

Park at the Long Canyon trail head. To reach the trail head, drive down Dry Creek Road to its dead end. Turn right on Long Canyon Road.  This road leads to a gated country club.  Before you get to that gate, on the left is a decent sized dirt pull-through parking area with a trail head sign. You will hike on a trail heading northwest that parallels a golf course (Long Canyon Trail). You hike a flat trial for approximately a mile or so in which you will cross a significant wash twice as it snakes through the trail.  After this you can see the prominent Three Tiered Spire (looks like the Three Gossips in Arches) up on the right side of the canyon. As the name implies, it has three summits/towers. You are climbing between the two most eastern features via a chimney system. There were no obvious cairns (2015) marking where you leave the established Long Canyon trail to cross the wash on your right and head up the hill. You are looking to ascend slopes straight up to the left side of the objective.  If you pick the right spot, there is little if any bush whacking and if you are lucky you will stumble upon a faint trail that is used by hikers to see the cliff dwelling behind the spire. Once at the base of the south face, walk right below the spire and scramble up to a cool slab to gear up on just left of the beginning of the route. The route starts in the far right finger corner with human sized chock stones up higher.

1st Pitch- 115’- 5.10-/ The first half of this first pitch is enough to make you question your decision to climb this route but you soon get over it.  It is as loose and fragile as sandstone gets.  Start up the right facing finger corner. The best pro protecting the first several meters of bad rock is a small pocket up and right.  Eventually you start to work your way through several human sized precarious chock stones. The most solid pro is a medium piece placed by squeezing in a hole behind one of the chock stones before pulling the steep final one. The second half of the pitch is much better rock and offers fun climbing.  Above the chock stones, start out with chimney technique facing the left wall. Then commit to the hand crack in decent stone taking the left option above (the right option leads to a massive pack rat midden; could be as old as 50,000 years!). Mantle on through a small opening (C4#4 protects this last move but I felt secure either way) to a fixed belay stance below the chimney/roof above.

2nd/3rd Pitches- 200’- 5.9/ These two pitches make sense to combine as the 2nd pitch would otherwise be quite short. This is a fun pitch. Head up into the narrow chimney to get a solid piece of pro.  Then squeeze out (tight) to the exposed edge and climb up the left wall to a ledge.  Continue up the wide left facing corner above with plenty of facial features helping you along the way. This last 100’ of climbing is quite run out but offers mellow climbing at the grade on decent rock. Eventually enter the chimney that forms the space between the two east summits of the three tiered tower. Continue straight up angling left at the end to a fun mantel onto the lower summit. Easy climbing leads to the middle (true) summit where you can set up a horizontal gear belay. The rap is located on the northwest corner of the lower summit.

With a 70m rope, take two single raps off the northwest corner of the lower (east) summit. The first rap is from two solid pitons (2015). The second rap is off of modern bolts on a small ledge. Leave your harnesses/gear at the base of the north face as you go explore the cliff dwellings (5 minute walk) before circumventing back around the west base of the tower to your packs. Haul your shoes on the climb for this purpose.

70m rope. Helmet for the first pitch choss for sure as the belayer is in the line of fire. Single to C4#5. Double from #.75 to #2. Double #4’s. Small set of wires or off-set cams. The first pitch is south facing. Second pitch is more shaded. Rap is shaded. Dress accordingly.