Velebit - On Tominsek Route
Tominšek Route ( in Slovenian: "Tominškova pot") is one of the two normal, marked routes from Vrata valley to Kredarica hut (and from there further on Triglav). It is a bit more demanding than the other route (Prag Route), but the difference is not big. However Tominšek Route is some 30 minutes shorter than Prag Route and more attractive. When people ascend on Triglav from Vrata valley, and also return there, they always choose the Tominšek Route for ascent and then return via the Prag Route.

The Tominšek Route is an ideal ascent over the huge northern faces above Vrata valley, one of the most recommendable in Julian Alps. Big altitude gain is needed, but this route mainly does it in a consistent crossing. The higher you go, the more beautiful are the views, first of all on the big North Wall of Triglav, but not much less attractive are also the views on high mountains across the green valley of Vrata. Short ferrata sections are always well maintained, so the ascent is despite exposure quite safe. After you exit the walls on some 2100 m, you have only one good hour more to the Kredarica hut and another good hour to the summit of Triglav. 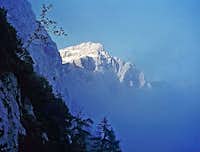 In the lower part
From the parking place you go a few minutes to Aljažev dom (hut) and then further up by the nice valley. After 5 minutes you already reach the monument to fallen partisans-mountaineers (a huge peg), where the Tominšek route is forking left. So you cross the (dry) bed of Bistrica creek. On the other side the path soon starts ascending quite steeply through the woods. Views open a bit when we cross the first ravine, then we ascend to the second ravine, above which the path reaches the tree line. Above us are high walls of Cmir, with their characteristic strata, but our route ascends steeply towards the right and gains a top, overgrown with the highest larches and pine bushes.

From there on, the path crosses constantly towards the right and up, across the steep face of Cmir. It mostly uses broad and comfortable ledges, but on many places there are also narrow and exposed passages. Time to time the path also climbs up the rocky steps, gaining altitude. As we approach the North Wall of Triglav, the views on it are becoming more and more beautiful. All its pillars and gullies are clearly unfolded before our eyes.

Somewhat higher the route reaches after another rocky section a very panoramic promontory, popularilly named as the Buffet. Unless you are the first one, you will certainly meet there people snacking on the nice, exposed balcony, and admiring the mountaineous world around. Then the climbing continues. The steep, most dangerous ravine (if filled with snow) is called Devil's Ravine, later many very exposed and also narrow passages come. There's more and more climbing, but we already feel the end of high walls. By going around the beautiful edge of Kozja dnina, the path finally ends it long crossing.

Views from the promontory on the mountains across the Vrata valley

Now we are just below the vertical walls of Begunjski vrh and the scree section is ahead of us. From the right the Prag Route joins us. The path keeps closely to the vertical walls and soon reaches Begunjski studenec. This is a small water source which usually has some water during the whole summer, except after long, dry periods. A true blessing in these barren rock slopes! After the water source we must continue ascending the scree slopes some 50 more meters, after which we reach another branching. Our route to Kredarica hut forks right (the left path goes to Stanič hut). Be careful not to miss it.

Over the High Plateau

Next good one hour we shall be ascending over a rugged, slanted rock desert, where we still see the remains of the Triglav Glacier. The path first crosses the lower part of the plateau, called Kotel (=cauldron). Then it continues more steeply up. It mostly avoids the remaining snow fields, winds left and right by broad gravely banks, left over by the glacier, aiming slightly towards the south west. On the right is the summit of Triglav and we must reach the saddle between it and the Kredarica ridge. From the saddle, the majority of hikers goes first left to the nerby hut, but we can also save those few minutes if we continue the same day on the summit of Triglav.