It was Amit, Poorva, me, Manasi and Yuvaan, who had planned on hiking up Torna. 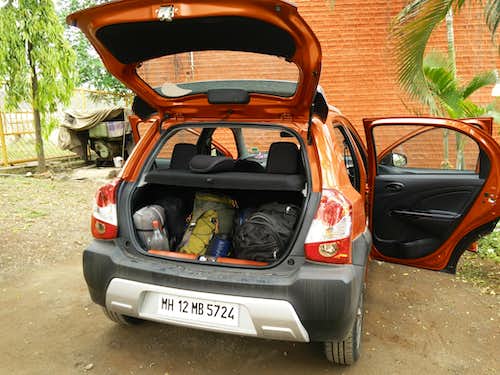 All packed at Khanapur
But this plan was clubbed along with camping in Pabe-khind, a pass which one has to cross, while going to Torna, from Pune’s side. 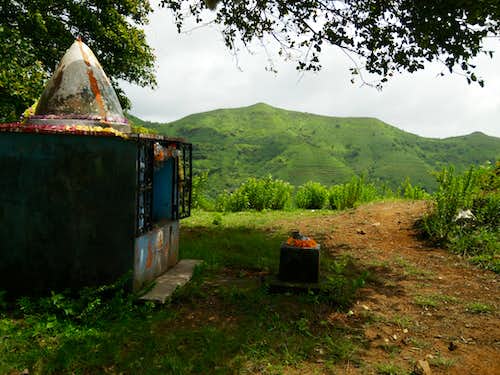 Camping Site
One can also go directly to Velhe (the village at the base of Torna), but we preferred staying at Pabe khind, and going for the climb the next day.

We had just bought a new car, and we were all excited about taking it out for the hike. 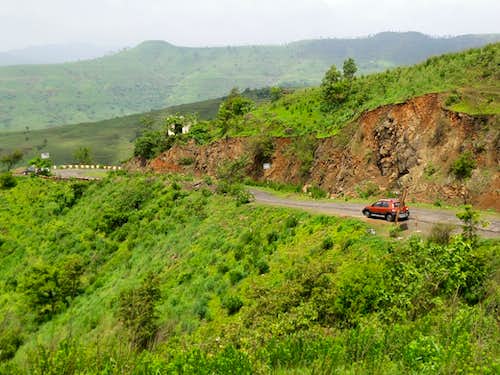 Parked car - in the open
We would park the car at the pass, camp on the pass, and then go climb up Torna the next day. So, after a lot of preparation, we set off for Pabe khind at 6 pm. 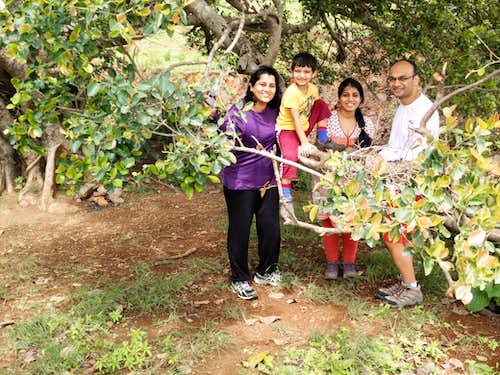 Climbing atop a tree...
It was a working day, so Amit took long to come home, and we could not leave early, and it got dark. We knew the route – so we were comfortable. We passed the Donje phata, and passed the Khanapur senior citizen home, which has been set up by Rohini Atya. After we crossed Anandvan, which is a farmhouse society, it got really dark, and it started raining. But, we still headed on, and reached Pabe khind. 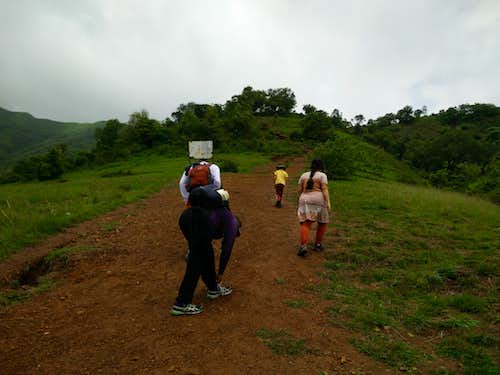 Trail starts
It was dark, and there was not even a car in sight. Amit assured that he had camped here earlier, and it would be great. The atmosphere was very fresh, and we were all excited to camp there. But, there was only 1 problem – there was no appropriate place to park the car. Amit told me that the car needed to be parked in the pass itself! 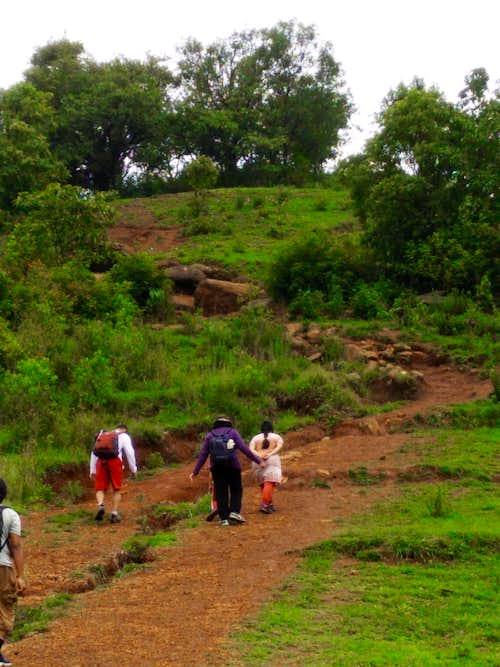 Up the mountain we go

The car was a 5-day old car, and
I was not very sure of parking it on the road for two reasons – one – any
drunkard could come at night, and crash into it, and leave, without us knowing
about it. 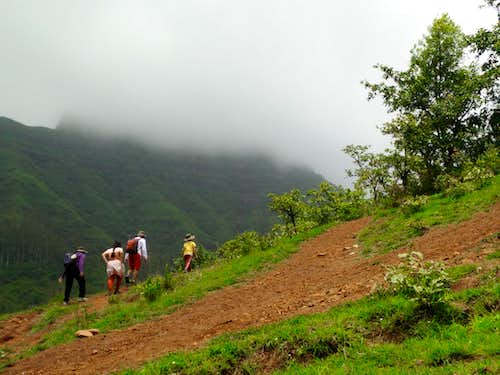 Up we go
Second – if a group of people came looking for us, then we could be
in trouble. 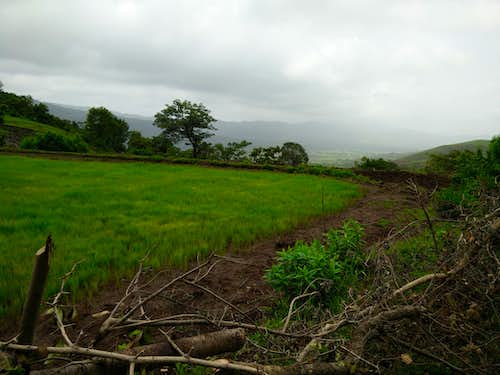 Rice field we walked past
There is no way we could face off with a big group of hooligans. So,
we decided to go to the other side of the pass, to see if we could see a temple
in a village, where we could park the car, and spend the night. 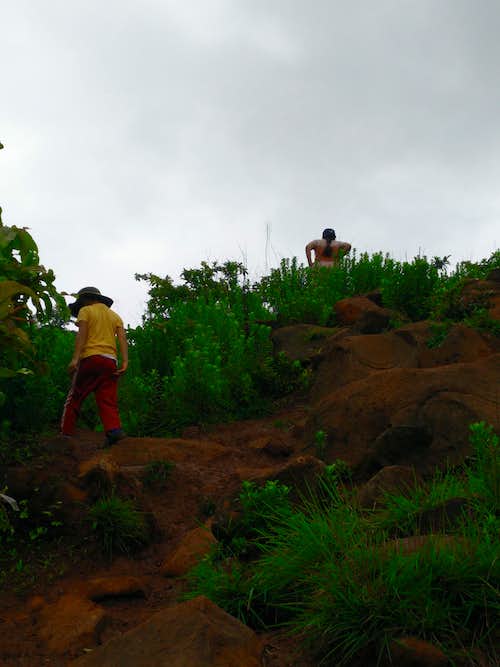 Yuvaan and Manasi climbing up
However,
surprisingly – all the temples were closed, so we couldn’t find a place to rest
for the night. Finally, we decided to go to the senior citizen home that my
aunt owns at Khanapur, where we could crash for the night. 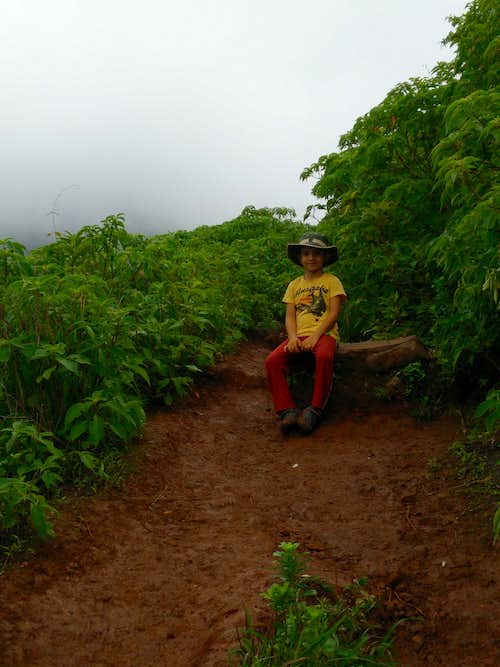 Rest Stop
For that, we had to
climb up to the pass, and again, drive all the way back to Khanapur.


In hindsight, it proved to be a
good decision. In the morning, we were all rested and fresh. 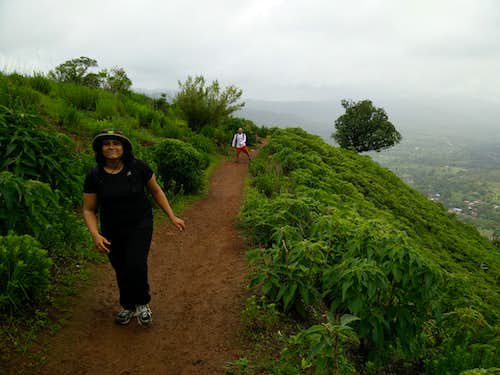 Amya and Poorva
We had a good
breakfast, and we headed to the base village of Torna – Velha. We got a spot
near the beginning of the trail, where we could park the car, and we started
the hike.

At first, the hike traverses around fields, where rice has been planted, and then it takes a steep climb up a ridge. The ridge is covered with greenery everywhere, and the trail is almost masked in the bushes which is a result of the recent rains. 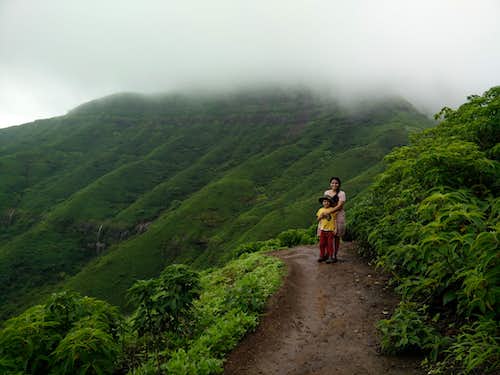 Yuvaan and Manasi
Actually, rainy season is the main season when such treks are undertaken. We climbed up the trail, with Amya taking a nature-call break in between. 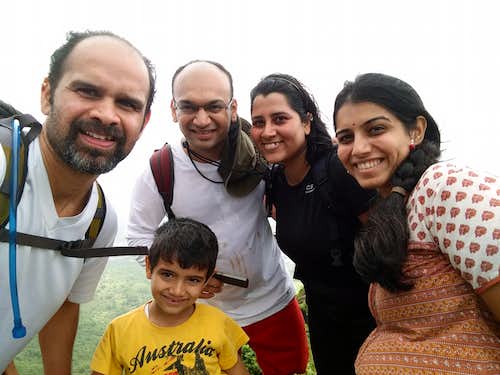 All of us
On the trail, there are a couple of small setups where local villagers sell some food and drinks for the hikers to refresh themselves. As we had plenty of things with us, we didn’t care of any of those things. The fort Torna was not visible at all as it was completely shrouded in clouds. Way below, we could see rice field in full blossom, with the green color as refreshing as ever. 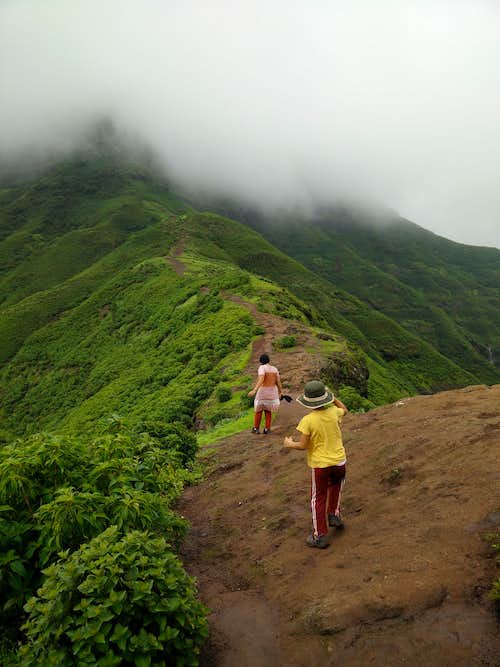 After a while, Yuvaan started feeling hungry, so we unwrapped the parathas that we had taken along, and munched our way on the trail. 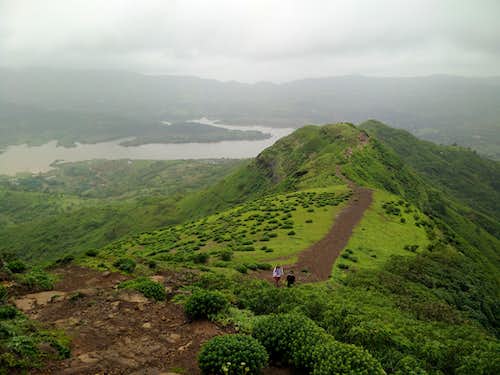 Middle section
There is a section where the trail opens out with valleys on both sides of the trail. This is where there are very high winds, and to our surprise, we saw similar shrubs growing around the trail. The shrubs were moving / swaying in the wind in such a fantastic manner that we just stood and watched the miracle. After this patch comes the crucial patch on the hike – the rock patch. 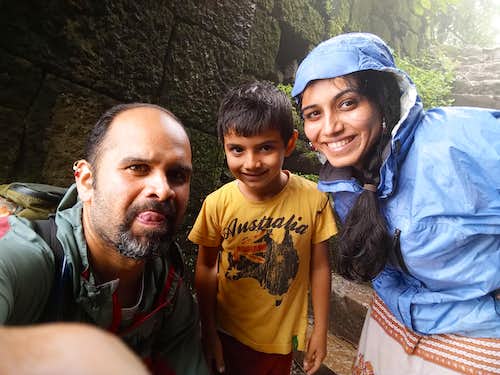 At the entrance
The rock patch is actually a 15-20 ft. patch, which can be tricky, as on one side – if one slips, then there is a direct fall a couple of
thousand feet below. 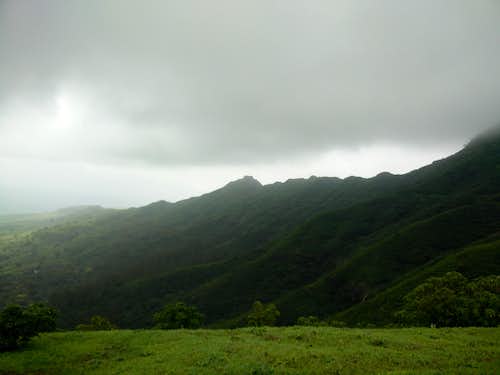 Flanks of Torna
So, we all had to be careful while climbing up. There was a metal railing which somebody had installed probably a few years ago, and to
that was bound a piece of cloth (saree, to be specific) which also people were using to go up. While climbing, the only concern I had in my mind was – how to negotiate this while coming down? 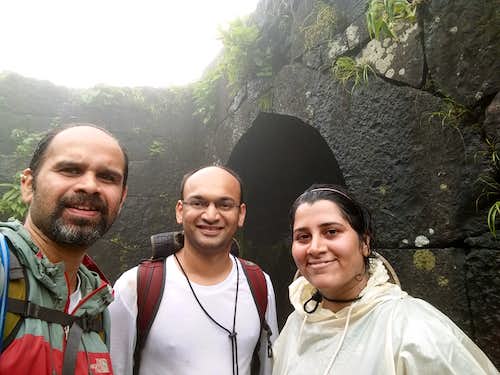 Three of us - Yuvaan clicked this.
It was certainly not going to be easy, and one has to down-climb. Somehow, we negotiated the patch and went up, to
literally – walk in the clouds! The entire fort was engulfed in clouds, and it was impossible to see and assess what was in front of you within a few feet. 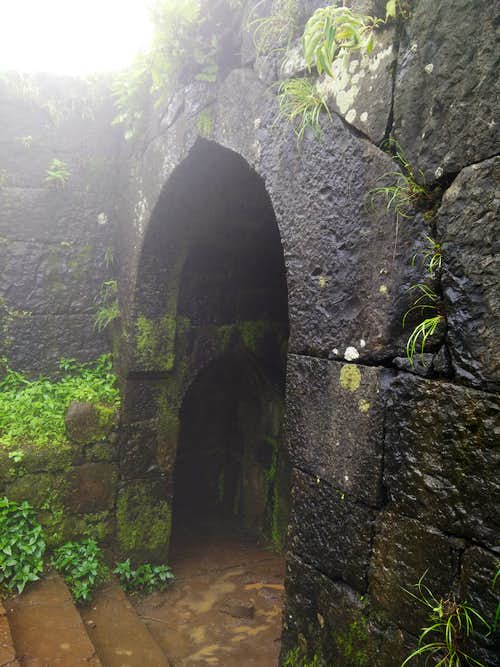 Small door to the fort

A ten minute hike up the trail led us to the newly constructed Mengaai temple. Mengaai is the name of the goddess, which is worshipped here. The temple was in a ruined state, when I had visited Torna in 1998, but now, it was a very nicely constructed temple. We went inside after removing our footwear, and I lit the stove. We all had a nice cup of tea, along with the snacks that we had got along. There was a group of students who had come, and while climbing up, had gotten all wet in the rains. I offered them some tea, but had to take water from them to make the tea. With our tummies full, we thought of roaming around on the fort.

Almost one and a half hour away is a part of the fortification called Budla-Maachi. 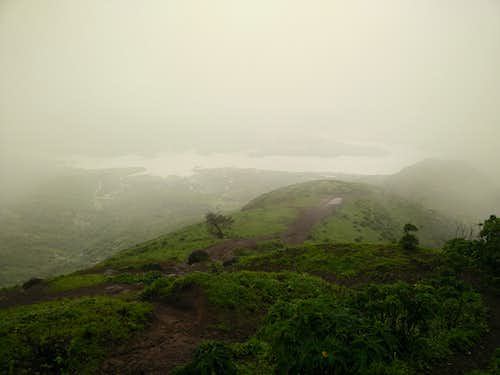 Dam view
This is a place, which you encounter, when you come on to Torna, from Rajgad. The Rajgad – Torna trek ends here, and then after this walk, you come to the Mengaai temple. We thought of going to the maachi, but I knew from previous experience that the trail was a tricky one, with many places where there were sheer drops on both sides of the trail. So, I avoided going in that direction. 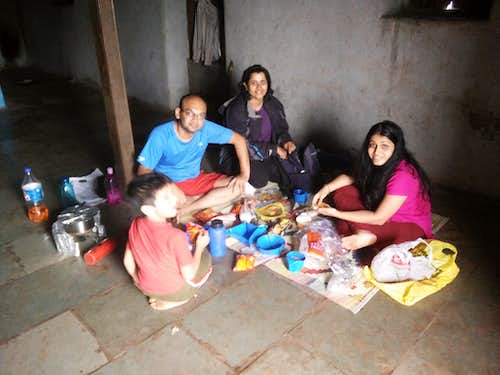 Cooking
A small piece of history here – Torna is the first fort which has the distinction of having being captured by Shivaji when he started building his empire. 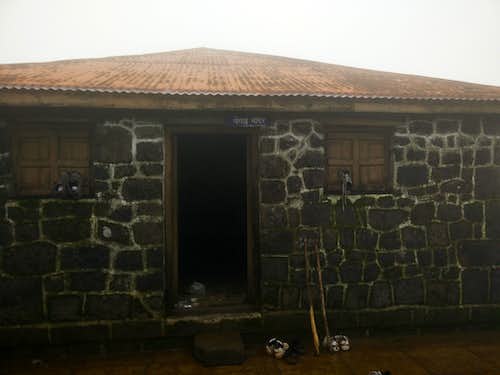 Mengaai Temple
Shivaji, the great Maratha king’s father was serving the Mughals, but he was raised to think independently, and his mother motivated him to build his own empire. He started his empire of around 372 forts all across Maharashtra, by winning Torna as the first fort. 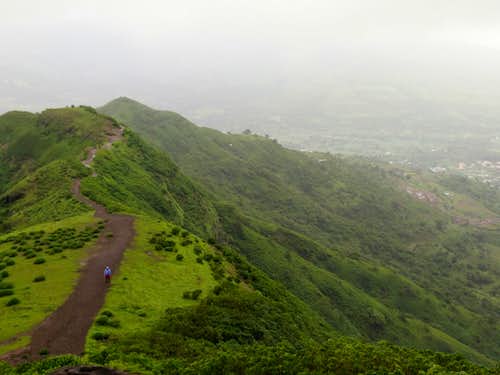 We saw the possibility of looking around, but everything was so white-washed that it was impossible to go around. So, we decided to take a call to return back to the base. On the way down, I was worried about the rock patch, but there was a group of people coming up, who supported wholeheartedly. They took care of Yuvaan descending, and I helped out Manasi and Amit and Poorva. 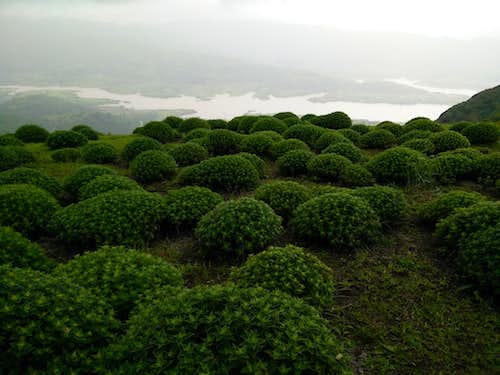 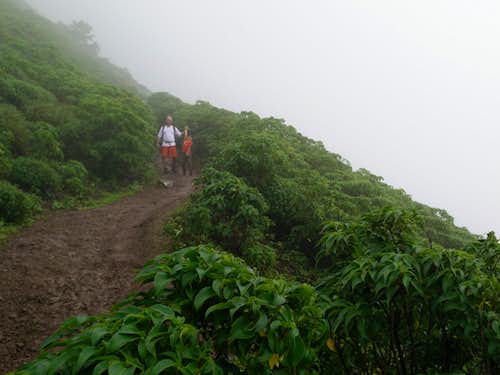 Within half an hour, we were able to see the base, but it had gotten dark. On the way down, we met the same group of people to whom we had offered tea. Most of the students were from out of Pune, and had never climbed a hill before, leave alone in the rainy season! So, they were terrified to walk down the trail. Some of the girls were actually sitting down, to come down. When they saw Yuvaan going down in full speed, they were shocked to the core. 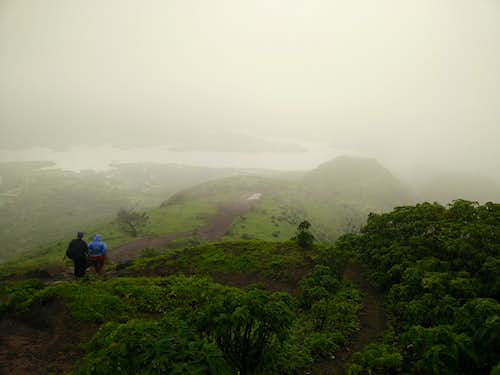 Rain everywhere
We reached the car, and our brand new car was completely spoilt with mud, as our shoes were filled with mud. Gladly, we changed clothes in the car, which prevented the mud from getting stuck to the seats, but overall – the car was screwed! With contentment of having climbed a tough and high one, we all left for home.