Head of the Valle Frances.
Introduction to Paine

So we (my wife and I) were planning to spend 2 weeks in Chile, and while there spend 5 days hiking the W circuit in Torres del Paine (TdP) in Patagonia.  After crunching the numbers we decided that we needed to trim the budget.  Considering that airfare was almost half the budget, we realized we'd have to spend less time traveling in Chile and more time hiking.  My wife and I are fairly avid hikers/runners.  Myself more than my wife, but we're both in pretty good shape.  Either the W or the full Circuit is most doable for just about anybody with a little planning and consideration for your abilities.  For those of you that aren't familiar with trekking in Patagonia, TdP is a bucket list objective for anybody who loves the outdoors.  TdP is like a national park and has really two main trails to choose from with several smaller, lesser known trails in the area.  About 90% of people do what's called the W over about 4-5 days.  It's called the W because it's shaped like a W and covers a distance of about 60 km/37 miles.  The other option is called the Circuit and incorporates the W, but completes it into a loop and covers a distance of about 130 km/81 miles.  This trip report will focus on our experience of the Circuit, but even if you're only planning to do the W you'll find this report helpful.  I'm not going to cover every minor detail or give a complete introduction here, but will fill in some blanks that I wasn't able to figure out or completely understand until I was there.  If you're considering visiting here you'll need to do some additional reading to fully understand how to hike in TdP.
As I said before, most people only do the W, but we decided to do the whole Circuit since we had time, and camping was a lot cheaper than renting a car and driving through other parts of Chile.  For the trek we allotted 9 days, and most guides will say 7-9 days is typical.  Most guides will also tell you that most people do the Circuit in a counter clockwise direction starting at the Hotel las Torres (located near the end of the brown highlited section).  We decided to go in a clockwise direction because I had already made a couple of camping/refugio reservations and didn't want to lose them by changing direction and thus affecting the days where we would be in certain places.  Refugios, you may ask?  Well, it is entirely possible to trek either the W or the Circuit and never have to camp in a tent, or even carry your own tent.  There are established "hostels" called refugios along the trail.  In these you can rent a bunk bed, buy a hot breakfast/dinner, sack lunch, bottles of wine, beer, snacks, etc., or rent a tent, sleeping bag, sleeping pad, etc. and camp outdoors.  At the Los Cuernos site you can even rent a private cabin (more on refugios below).  The first thing you'll need to do is decide on the W or the entire Circuit, then where you want to start (Paine Grande by way of the catamaran across Lago Pehoe; or from Hotel las Torres), and if you want to go clockwise or counter clockwise. 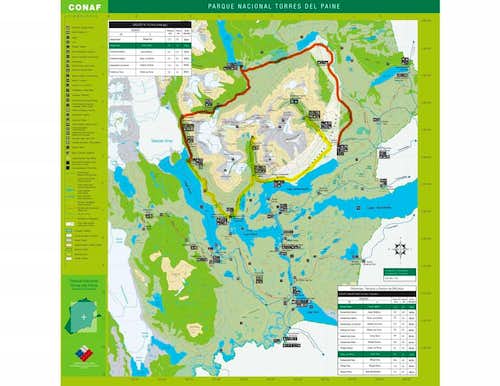 Reservations, or Wing the Paine?

I'm a self admitted planner.  That's what I do because I'm afraid of missing something if it's my one and only chance to visit someplace.  We had originally planned to make this trip in early September, but then we found out a lot of the established camping areas and refugios don't open until November (remember TdP is in the southern hemisphere so November means spring time).  So, we re-planned our trip for late November to take advantage of the Thanksgiving holidays and 2 free days of vacation time.  The busy season for TdP really doesn't get geared up until mid-December and runs through February (their summer months).  Since we were there in spring time, and hence early season we would probably have been fine without reservations, but if you go during peak season you may end up without a place to sleep in the refugios, although I've heard that if you're tent camping they'll find you a spot.  The more popular refugios, and especially the indoor beds, tend to fill up very quickly so play it safe and plan ahead.  I was surprised by how many people we met in the area and on the trail who had no plans what so ever.  It's like they woke up, grabbed a jacket and a snack and decided to hike for 5 days.  We found out a lot of people make their reservations the night before from each camp site or refugio (the rangers at each location have radio contact with all of the other sites), or just show up altogether and hope there's room.  The refugios and most campsites (some are free) in the park are run by two different companies and you'll need to visit each one's website to see their services.  Note that if their website shows no availability you should email them because they often do have space and their website is just wonky.  The first company is Fantastico Sur and the second is Vertice.  The free campsites are administered by the Park and are on a first come basis.  We used a mixture of reserved camp sites, a couple of refugios, and some free camping.

So we decide to start at the Hotel las Torres and go clockwise for 9 days.  This was our planned itinerary for each day: 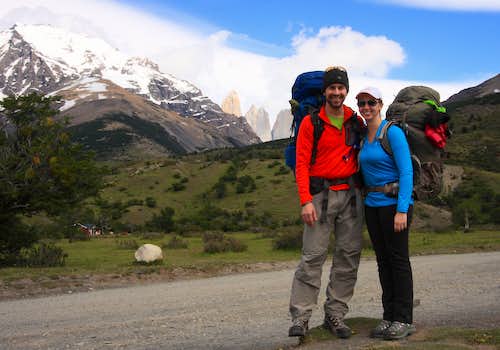 My wife and I starting the Circuit on a blue bird day. 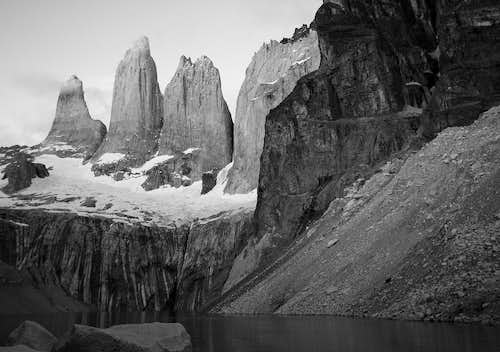 The Towers at sunrise in b&w.
Other Paine-ful Notes for Planning 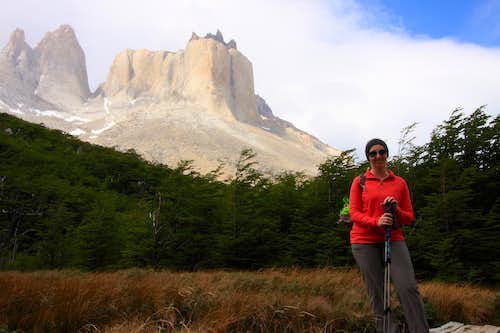 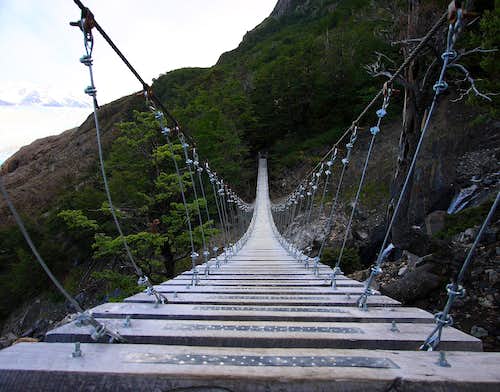 We had to cross this bridge with a 40mph cross wind and try not to get blown off the other side.  Have fun!

All total our packs (including the weight of the pack itself) was about 55 lbs for him (including about 10 lbs of camera gear) and about 40 lbs for her.  This also included about a liter of water each of us was carrying at any given time & our food for 9 days.  If you go the easy route and stay in refugios and buy all your meals there you could very easily carry a light day pack and carry no more than 10 lbs....but that's the pansy way to go + you'll spend a lot of money!

Penguins.
Now it was time to go home, and considering our problems getting to Punta Arenas I wanted to make sure we could leave so we left the hotel plenty early in a cab the hotel called for us at 5:30 AM.  We were at the airport, with bags checked and through security in 17 minutes.  So we easily made it Santiago where we spent two uneventful days looking around.  Santiago was starkly different than southern Chile and english speakers became harder to find.  We rested up and did some strolling around but I wouldn't waste any time there.  We got to the airport in plenty of time (again) only to find out that our flight to Dallas was cancelled.  We stood in line at the ticket counter with everybody else for 2 hours trying to get on the midnight flight to Miami where we could drive home if we had to.  We made it to the gate with minutes to spare.  The downside was instead of flying from Miami back to Nashville we had to go to Baltimore, then get ourselves to Reagan National (in D.C. an hour away) for our connection to Nashville.  An ice storm had been slowly wrecking havoc throughout the west and south, and then turned up the coast towards D.C.  We landed in Baltimore just as the snow started to fall.
Oh, did I tell you that when we left Miami a passenger needed medical attention so we had to make an emergency landing in Orlando?  Well, that meant we missed our connection in D.C.  We finally made it to Baltimore and took the Super Shuttle to D.C. in a snow storm with fingers crossed we could make the next flight (which we did).  Time to finally go home.  Or not.  Our flight was canceled and we were rescheduled for the next flight later that night, so we checked into the TGI Friday's for dinner and beers.  After relaxing I asked my wife to double check the departure board to make sure our flight hadn't changed again.  It had.  "CANCELED".  I sent my wife to the ticket counter while I paid the bill.  By the time I found her the line was easily 3-4 hours long and my wife had gotten in line while it was still short.  I go to get our bags at baggage claim while she sorts out our new tickets and gets  discount voucher for a hotel room, but I'm ready to rent a car and drive home.  Well, we ended up having to spend the night in D.C because there were no more flights anywhere close to home, and all the cars had been rented.  Ugghhh.  The next day our mid-day flight was again delayed just as another snow storm was starting to move in.  After a 2 hour delay we actually left D.C and made it to Nashville.
Lesson(s) learned?  First, we would have been far better off in Santiago if we had booked directly with the airlines.  In this country and in Europe it's easy to take it for granted that different airlines and computer systems will all have your reservations coordinated.  That's what I get for buying the cheap tickets online I guess.  Second, I'm so glad we had the extra days scheduled into our trip, otherwise we would have had to cut our trip short or completely change the itinerary.  Although we were a little worn from the wear, we didn't miss any time in the park, and arrived home 1 day later than expected.  And third, patience can be a virtue but especially in Latin American countries you sometimes have to scream and yell to get the level of service you require when things go wrong.  In the end, if all had gone smoothly, this post wouldn't be near as long, nor would I have as many stories to share.  I have lots more photos here. 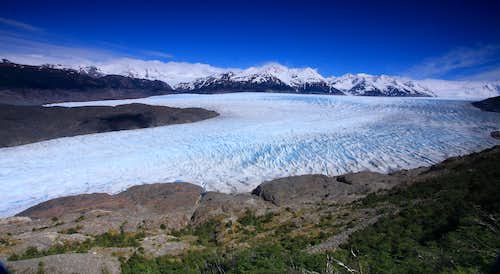 The icefield is the source of all the winds. The next day we crossed the pass.

The report above is really great. I just want to note that several things have changed since the report was written. As of 2017, you now need to have advanced camping reservations for every night of your trek in Torres del Paine. You are not allowed in the park without advanced reservations. You also can only hike the circuit in the counter clockwise direction. There are some other minor changes as well, but those two are the main ones. Here is a report I wrote describing my preparations and experience hiking the Circuit in December 2017: https://backpackersreview.wordpress.com/trip-reports/torres-del-paine-circuit/