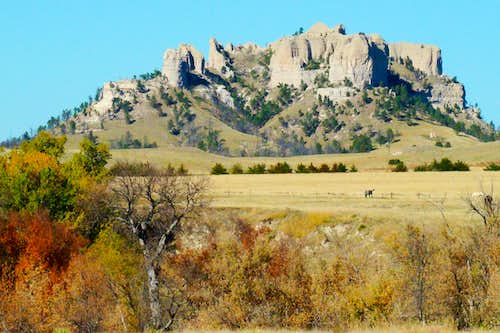 One of the most desirable scrambling destinations in Nebraska has to be Crow Butte, located in western Dawes County just a few miles southeast of Crawford and Fort Robinson. This impressive butte, the number 14 ranked summit in the state, stands out by itself away from the closely crowded buttes and ridges of the Pine Ridge. The site of an 1849 battle between the Sioux and Crow tribes, it has been a priority choice for those fortunate enough to obtain permission to climb this private land summit. Steep sides all around the butte, along with impressive spires and columns also make this a photographer’s favorite. Western Nebraska hikers and climbers are mostly agreed that this is one of the most desirable summits to climb on private land. 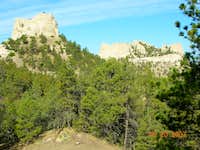 Crow Butte has certainly captured the attention of writers and photographers in Nebraska. Early in September of 2007, I received a call from public relations at the National Forest Service office in Chadron. Because of my work on Panhandle Trails, the hiking website for western Nebraska, I was asked to arrange several hikes and climbs for a magazine staff writer-photographer later in the month. Crow Butte was to be the centerpiece of those destinations. 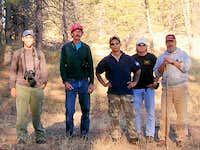 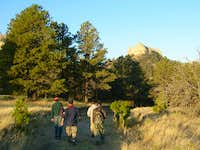 Since I had climbed Crow Butte twice before, I knew that because of the private property considerations, I would have to carefully assemble a hiking crew that would meet approval of the property owners. When all the preparations had been made, our crew consisted of Jeff (magazine writer and photographer), Max (owner of the property on the east side and our host), Mike (from the forest service), Greg (area businessman and photographer) and me. Because of all the photographic gear being hauled on this climb, I suspected some would have to be temporarily left on ledges below the summit. This pretty much turned out to be the case and everyone’s gear made the trip without incident. 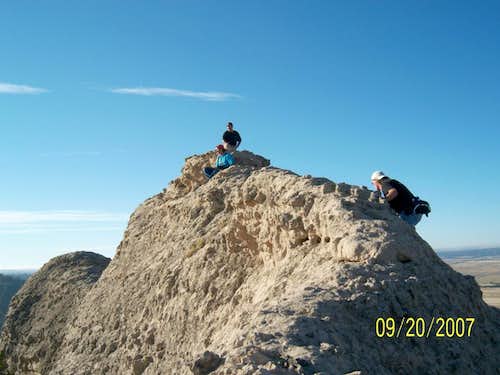 Another Straggler to the Summit, photo by Greg Pak 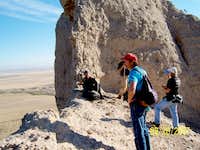 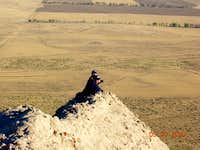 Photographers on the Ridge

Thursday, September 20 turned out to be a beautiful, sunny day. Though not officially autumn yet, the colors of fall were already beginning to show. Our crew drove the 25 miles from Chadron southwest to a ranch house about 1 mile east of Crow Butte. The hike began by following an old 2-track out to the base of the butte and took us through a small draw, where we passed the remnants of the infamous “Moonshiners Cave”. The cave was notorious during Prohibition days for supplying area residents with illegal liquor. The “rock” of western Nebraska’s buttes and peaks is an unstable mixture of sandstone, volcanic ash, siltstone and limestone. Serious rock climbers have shied away from traditional climbing because of the dangers of the crumbly rock here. Most of the climbing required for Crow Butte is classes 2 and 3, though the last push to the summit could probably be classified as a class 3+. Because of the sheer walls in many places, there are really only two routes to the summit, one from the east and one from the west. Both converge on a ledge on the upper north edge. 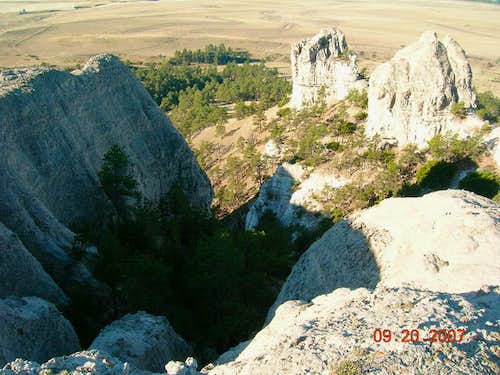 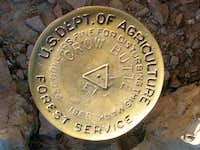 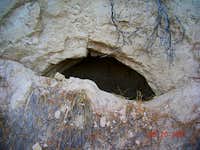 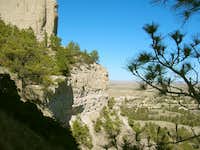 The two serious photographers in our group, Jeff and Greg, each would take turns leaving the group at times, setting up for some spectacular photos that none of us got to see until much later. Throughout the journey, Max shared lots of interesting bits of information about the history and geography of the area. On this day’s expedition, our group did not find any bighorn skulls or skeletons, like I had found with another hiking partner earlier that year. Max informed all of us that he had an automated game camera to the east of Crow Butte, and had gotten a good photo of a mountain lion. The time and date on the photo showed that the lion came by the camera just nine minutes after Max had come by to make a periodic inspection! We all wondered if the lion had been tracking Max. The route up the east side of Crow Butte was defined by nature, leading us eventually to the shelf on the upper northern ledge. The summit is the high point on a knife-edge ridge which runs roughly on a north-south axis. The western side was just a little less steep and had a better ledge below to catch any of us who might slip on the crumbly rock. We took turns scrambling to the summit, and then enjoyed a break for lots of photo-taking and viewing of the area with binoculars. There was no summit cairn or register, but there was a geodetic marker. The geodetic marker at the summit was not as deeply embedded as most such markers are, leaving us to wonder about the rate of erosion of the soft rock composition there. Thankfully, the summit does not show signs of extensive human visitation like some of the popular summits at nearby Fort Robinson. After we had our fill of photo-taking and lounging at the summit, we made our way back down the eastern route we had come up. Max asked us if we were tired and wanted to go back to the ranch or if we would like to see a bit more of the area. We all chose to go with Max over to Little Crow Butte and then on to Castle Butte. 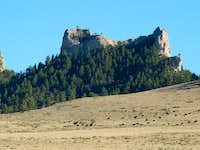 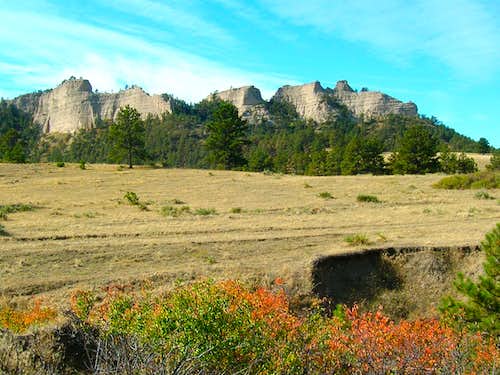 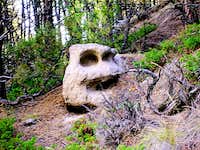 Our route over to Little Crow Butte followed game trails, which seemed to almost fade out at times. Little Crow Butte appeared to be one of those Nebraska summits like Dome Rock at the Scotts Bluff National Memorial or Jail Rock near Bridgeport, with sheer sides and no stable rock for technical climbing. At the time we hiked this route, we enjoyed the shade of the dense pine forest. Little did we realize how much of this forest would be destroyed in the area’s major forest fires of 2012. Moving on past Little Crow Butte, we came to the very steep northern slopes of Castle Butte. The northern face of Castle Butte is like Little Crow Butte, with sides that could only be scaled on a technical climb, if only the rock were stable. Max told us we were welcome to circle around to the south side of Castle Butte if we wanted, but that it was so steep he was not interested in joining us. About that time, we came upon an odd-shaped boulder that had the appearance of a face. Because of the weathering of the soft rock, we could not determine if this had been carved centuries before, or if it was a creation of nature. After we snapped a few photos, we opted to continue east on the game trail and then back to the ranch. Max and Mike had their own plans for after the expedition, so Greg, Jeff and I headed back to Chadron for some steaks and cold drinks.

For anyone who would like to climb Crow Butte, here are two resources to help get started: