This route is usually crowded, thanks to the easy approach from the "refuge Torino". From the refuge take the indication to the glacier and “Colle del Gigante”. From the begin of the glacier follow the footsteps that lead to the “Cirque Maudit” and go across the “Col Flambeau”. The climbers that walk on this way are so many that is impossible to lose it even in the fog. The route goes down for more or less 150m, bypassing the “Aiguille du Toula”, and after get up for 200m till the flat part of the glacier at the foot of the "Tour Ronde" east side. The ascent along the east face is preferred to the SSE ridge, because shorter and little bit easyer. Along the route, there aren’t any protection pegs, except for an abseil anchor in the upper part. It is also used for coming down from other routes. Often used also in ski tour. It was climbed for the first time in the year 1867 by the english alpinist “Douglas Williams Freschfield”.

The route on the east face, allows an easier approach to the SSE ridge, above the notch called “Colle Freshfield” (3.655m). The east face in its middle, is covered by a snow slope, similar to a couloirs, that can be climbed only in good conditions when the snow covers almost continuously the slope. Otherwise is better to avoid this route in the late season when is easy to find rocks outcrops and ice. Due to the east exposure, the snow melts very quickly and the risk of falling rocks is very high. 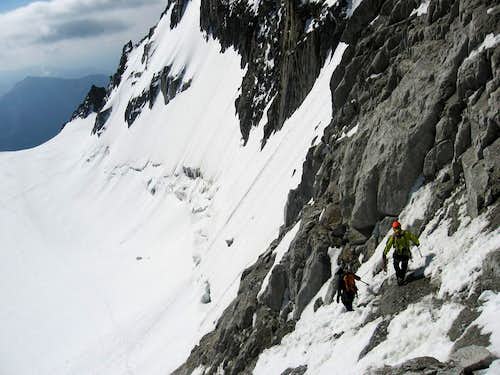 To reach the base of the slope, first of all try to overcome a bergschrund not always confortable. Above the bergschrund, climb on easy rock knobs (soil attention!). Higher up the slopes begin with an average steep of 45°, in few places even 50°.
The slope takes up till some overlying rocks enclosed in beautiful flakes of gray granite. Go through these easy rock without a precise itinerary (II°), choosing whether to stay in the snow (if in good condition), or if case of verglass, stay on dry rocks. 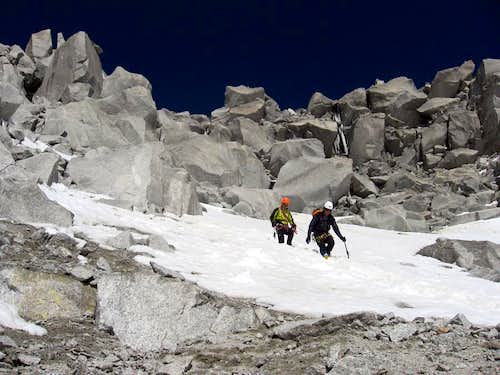 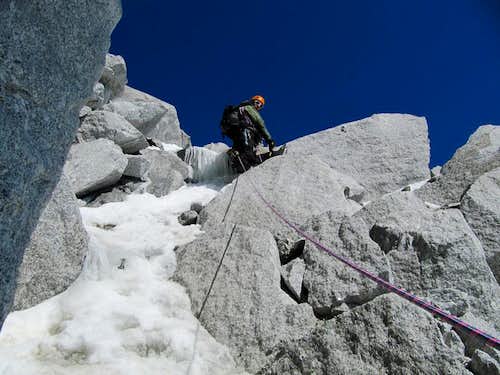 The rocks take shortly to the edge of the ridge watershed. From here, spectacular scenery of the “Brenva” side of Mont Blanc. Once the ridge has reached, follow it quite easily, abrupt in the begin and then more and more smooth, to the rocks of the summit.
Climb the rocks smooth and sloping, exploiting some parallel slits, and hence easily the top where it is placed a statue of the "holy Mary". 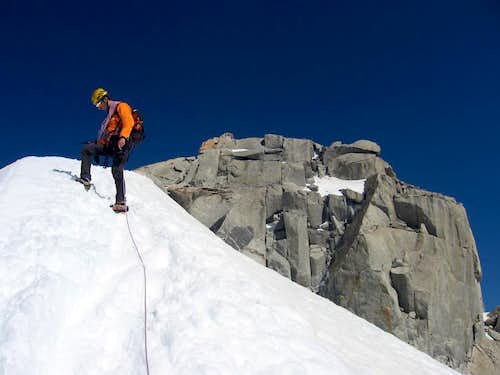 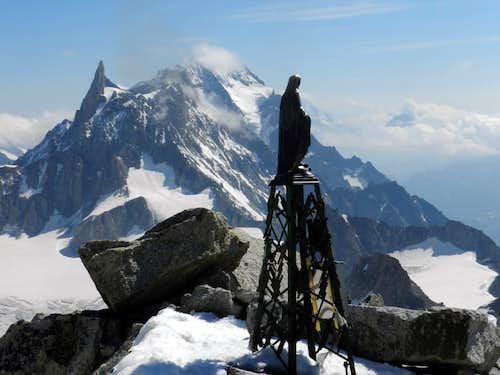 For the descend follow the same route. In the most difficult section, at the end of the rocky part, a huge stone is equipped with a rappel anchor. With a 30m abseil, is possible to get down the steep snow slope fast.
From here, on a rock outcrop, a rope sling in blue color (placed by myself), allows to descend other 30m (or more) until a less steep part of the hillside.
The descent of the face can be dangerous in the late time, when the wall is crossed by rivulets of water and the snow is inconsistent.
Video from the summit