A magnificent peak "Dolomites-style" far away from the Dolomites

Tour Termier is a beautiful and stunning limestone tower lying immediately south to the imposing Grand Galibier, in the West-end of Cerces Massif, a small group located in the French Western Alps, North-West to the town of Briançon and close to the France-Italy border.
The Cerces massif offers several superb and often difficult climbing routes, well-known also by the Italian climbers by means of its relative closeness to the Piedmont region and the town of Turin. On Tour Termier the limestone is truly excellent and spectacular, sometimes reddish and finely carved. On the West and South walls there are many excellent modern routes.

The starting point of the approach-trail is situated along the road to Col du Galibier m. 2642, which starts from Col du Lautaret m. 2057, an important road pass on the N91, connecting Briançon with Grenoble.

Follow the A32-E70 Motorway entering Val di Susa and exit to Oulx, reach Cesana Torinese and Claviere, then Colle del Monginevro m. 1854, on Italy-France border; from here the road N94 descents to Briançon. From Briançon follow the road N91 towards Val Guisane, reaching Chantemerle and Monetier les Bains, then the Col du Lautaret m. 2057; leave the main road and turn to right following the road to Col du Galibier. Park the car in a pull-out m. 2514, near the last hairpin before reaching Col du Galibier (about 130 km. from Turin).

From the hairpin a mainly level trail (blue marks) is starting towards East, leading below the tower after about 2 km. A steep scree is rising to the starting point of the routes. About 1 hour from the pull-out. 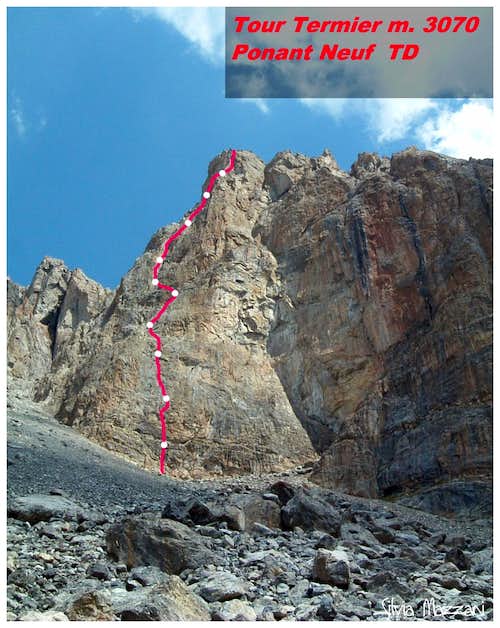 A spectacular route on excellent limestone; the rock is grey and reddish, finely carven with surprising inlay. The climb, running on a very steep wall, is always athletic and highly satisfactory. This wall, facing West, may be sometimes a bit cold, as a matter of fact the sun is lightening the route in the very first afternoon. West face, on the left-hand side, and South face, on the right one, are divided by an obvious great and white corner. A curious particular: marmots living around the tower are always hungry and greedy, eating every objects they can get.

L1 – A short pitch on a little chimney-crack and a short wall. 3b, then 4b.
L2 – Another short wall (5c), then a steep slab, slanting to left (5a) and leading to a lightly overhanging wall. Climb the wall and a short flake, 5c then 5a.
L3 – Climb a slab with few holds, 5b+, then a crack slanting left, 5a, and finally traverse left on a delicate slab, 5c.
L4 – Climb a sequence of little walls on the left-hand side of a pillar, 4c; some easy steps lead to a belay on a ledge below another pillar, cut on the right by a chimney-gully.
L5 – Climb the pillar 4b, then traverse the gully towards right and climb a steep grey wall, 5b+, then 6a; reach a grassy ramp and climb it to a stance (common belay with “Le Feu Sacré”).
L6 – Climb a wall slants to left, then traverse left 12 m. following a narrow and shallow ledge, 5b then 4c. Short pitch.
L7 – A grey slab, 5c+; belay inside a corner. Another short pitch. 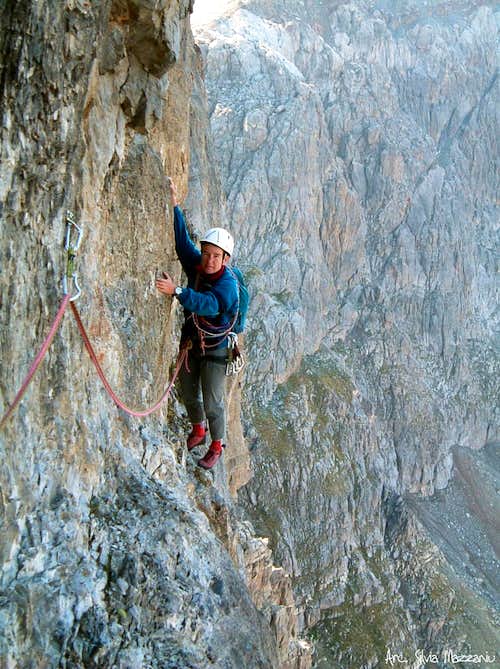 L8 – Climb a steep reddish wall on the right of the corner, then go slants to right, 5b.
L9 – Climb a narrow corner, or its right face, 4c, then 5b, then some short steep walls, 5b.
L10 – Towards right climb a steep slab, 5b+, then a lightly overhanging wall, 5c; climb a little overhang, 6a, a grey slab, 5b, and finally a steep wall, 6a+, crux. Belay on a ledge.
L11 – Climb a short steep wall at first towards right, 6a again, then straight, 5b. Enter a corner and climb it getting to the summit. 5a.

Descent - It's also possible rapping along an equipped line near “Ponant Neuf”, anyhow the best solution is the descent by walking. Head Eastwards – the opposite side of the climb up - and do a short downclimb (rapping possible), then continue by walk leftward (North) entering a valley and following it to Col Termier. From the col scramble down the West side (exposed and steep trail) reaching the basal scree. 1,45 hour from the summit to the parking. This descent is not advisable in early summer, when Col Termier is snow-covered.

No particulary restrictions in climbing and hiking.

"Selected Plaisir Climbs Of Switzerland 2012"  by Sandro von Känel - Edition Filidor 2012 - This guidebook features 115 of the most beautiful Plaisir routes (multi-pitch 4b – 6c) from the French Dauphine in the Southwest to the Alpstein massif in the Northeast. Includes many photos and exacting topos by the author who has personally climbed every route in 2011