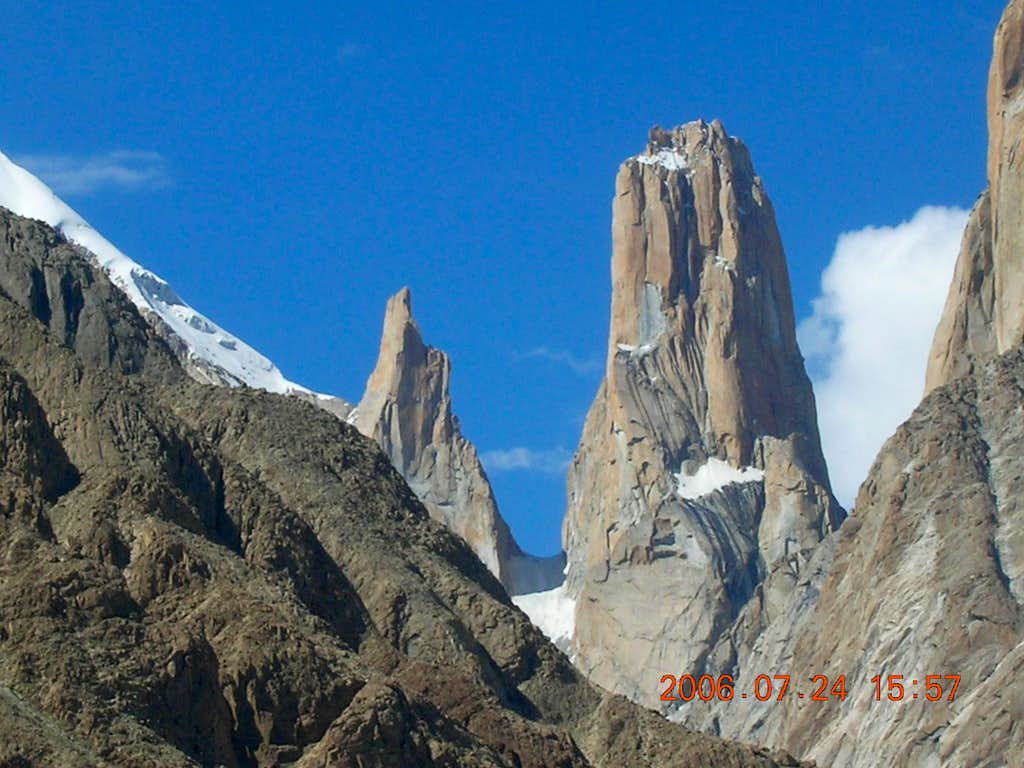 Hi Alpine. I had a doubt about this mountain. I thought it was the Biaho Tower. Am I wrong? Or, does the Biaho Tower bolongs to Trango Tower "group"?
Thanks a lot in advance.
Bye
Marco

It's Nameless Tower in the Trango Group. The other rock tower is Trango Monk.
Uli Biaho is not a part of the central Trango Group. I have seen some include it in "The Greater Trango Group".
I may have created some confusion when I included photos of Uli Biaho on the Trango Towers page. Also, I submitted some photos of Payu Peak, Lak and The Cathedral on the page. It's not correct to include any of those peaks in the (Central) Trango Group, but I did anyway as they're located close by and my photos of the central peaks are really, really bad.

Hi Marco
Uli Biaho peak more close to Paju peak.i sposed that is more left behind the rock rige ,but this is Trango tower and the picture i was took june 2006.i appricate your information
thanks
Qudrat

Hi Janne. Thanks a lot (as usual). You have an incredible culture about any kind of mountain!! Really incredible!! Congratulations!!
Bye
Marco

Hi Corax
Thanks for your coract information.i realis that you did already visited Baltoro glacier and seen the Trango in the right direction
bye
Qudrat

Tnanks to you too.
I was just a little bit confused:-((
PS Baltoro glacier is a relly incredible and fantastic plase. I hope to come back in the feature.

Qudrat - Yes, I have been to Pakistan a couple of times including the Baltoro area. Unfortunately, the weather was awful the day I planned to go and have a closer look at the central peaks in the Trango group.

I attached your nice photo to the Trango Towers page.

Corax are you only plan to see the mountain shape or would you dream to conquer this beatiful mountain,when you was Baltoro what done there ,climbed any 8000m peaks or only did trekking?

My plan (2005) was to have a look at the Trango group. Because it's beautiful and also because I may be interested in attempting Great Trango Tower.
My plan for Baltistan/Baltoro area was to attempt BP and GII.

Well Corax
whats you future proposation for climbing in pakistan,i,m going to K2 next year 2007 and it will be my second attempt on k2.this year we climb from Abruzi and we faced the bad weather.it was the frist pakistan local expedition on k2,we ware two climber and we fixed all roped to camp 3,Next year hoping to folow the SSE route of k2
best wishes
Qudrat

whats you future proposation for climbing in pakistan

My plan for 2007 is Manaslu, Nepal, but as it's a more expensive and also more complicated (Maoists/unrest/bureaucracy) option I may head for Pakistan and an 8000'er there instead. It'll not be K2 though.

Coax Good luck for Manslu
i been there 2002 with Amical aplin expedition and we back from 7700m the reason was one of our expedition member was seriou ill.but other members reach to summit.there is the risk of avalanche