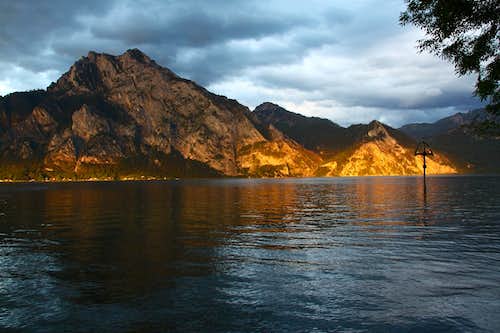 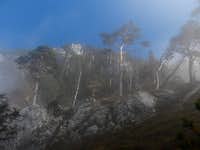 Traunstein is not a very high mountain. But it has all the attributes of an important mountain: relative heigth (1260 m of "vertical" rocks from Traunsee), beauty of its general shape and natural details, immense panorama and not so easy approaches. It rises on the eastern part of Traunsee (lake) and is one of the last high mountains in Northern Alps in this region. It is made of limestone, so we can understand it's sharpness and steepness.

Three marked routes are leading to the peak. This and closeness of very popular tourist resorts of Salzkammergut are reasons that mountaineers are visiting Traunstein very often. 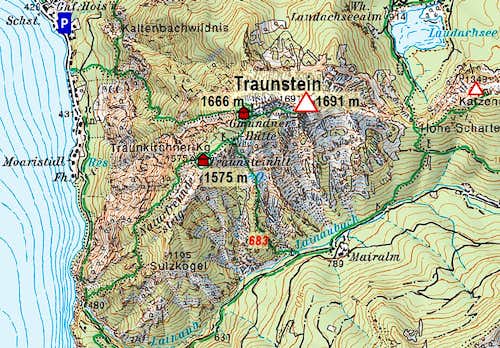 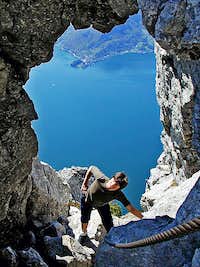 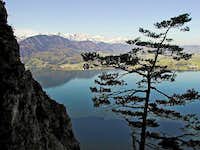 The highway Salzburg Linz is passing just a few kilometers north of Traunsee. If you turn south, you will reach Gmunden, a tourist resort on the very northern part of the lake. A train also stops there. From Gmunden follow the road by the eastern coast of the lake. It ends (is closed for a public traffic) at the Gasthof (inn) Hois'n, where you can park (there's always crowdy). Close by also the first of three routes start. In any case you'll have to make 1260 m of altitude difference. To the Hois'n inn you can also reach by a ship.

To name the three routes:

2. Naturfreundesteig (southwestern route). Opened in 1929, marked. Medium hard cable route, one of the most beautiful in Salzkammergut.

3. Mairalmsteig (southern route). Marked, easier than the other two, but still some passages steep and protected (grade A by the Austrian ferratas scale). Used mainly for descent.

In addition some more scrambles and easy climbs lead on the summit of Traunstein. Their difficulties are between II. and III. degree by the UIAA scale, for example: Zierlersteig (II) or East ridge (II+). Nice is also a hike around the whole massif. 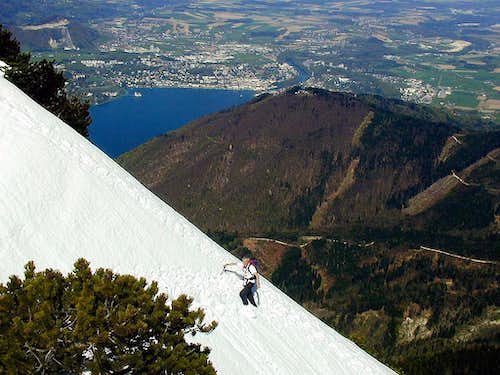 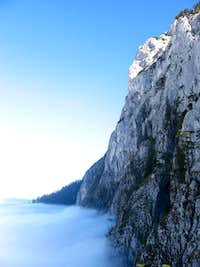 Cseh László - Above the clouds

June to October are the best months. Traunstein can also be climbed in winter conditions, but for that you need winter equipment and the southern approach can be a suitable one. But that route is exposed to avalanches and when there are big amounts of snow and in fresh snow the Naturfreundesteig might be be a better choice because of its sunny position. Always when in doubt ask local mountain authorities. 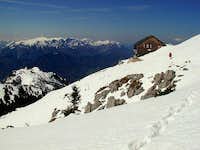 For Traunstein ascent the following huts are important:

i would not recommend taking the mair alm steig in winter conditions, even if it is the easiest way up/down traunstein. in winter there are lots of avalanches there. your best bet will be the naturfreundesteig if you want to go in winter

Thank you, pesef! I corrected the sentence and I hope I expressed the idea of avalanche danger well. If you have any other suggestions, please tell me and I will give you editing rights, so you can write directly on the page. Cheers! Vid