Starting point is Lämmerenhütte, 2507m above Lämmerenboden, that can be reached on the shortest way from Gemmipass (mountain railway from Leukerbad) in about 1,5 hours (see main page).

From the hut follow the path around the buttress of Lämmerenhorn to the tongue of the Wildstrubelgletscher (Wildstrubel-glacier). After ascending the eastern moraine the glacier is stepped on at altitude 2.600m. Over the middle-moraine to the bottom of the pillar beneath point 3172m. Ascending a steeper part of the glacier you arrive at the expansive slopes in the east of the ridge between Wildstrubel's western and middle summit (some crevasses). At least something steeper to the western summit of Wildstrubel.

Then north towards middle-peak, that can also be ascended directly from the expansiv slopes.

Eastwards follwing the in some cases narrow ridge (cornices!) you arrive Strubeljoch, 3092m. From here eastwards the summit of Grossstrubel. 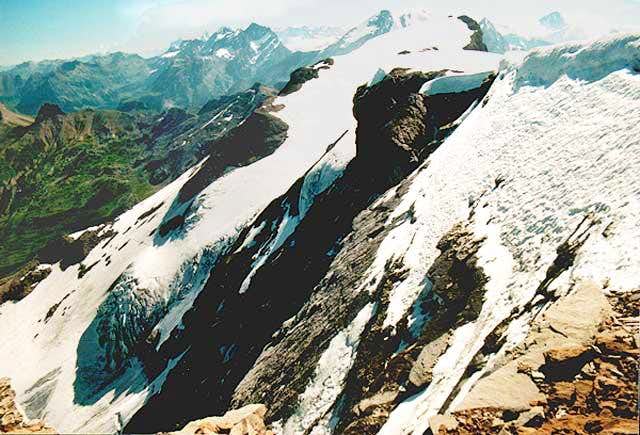 The picture shows the Grossstrubel, seen from the ridge between middle-peak and Strubeljoch.
The upper part of the descent leads over the rock island in the Ammertengletscher (or around it)
to the Fühstücksplatz in the middle of picture's left side).

Back to Strubeljoch. The ascent leads northwards down to the upper rocks below. Either across a weakly distinct ledge down the rocks to a branch of the Ammertengletscher and down to the Ammertengrat (Ammerten ridge, separating Ammerten- and Strubelgletscher) with the Frühstücksplatz ("breakfast place", 2860m) or down the glacier (beware of crevasses) around the rock-island towards the Frühstücksplatz. A steep groove leads down from Ammertenridge to the Strubelgletscher. Down over the upper terrace of the glacier, then turning left and follwing nearly the whole length of Strubelgletscher until the northern moraine can easily be stepped on. Down the moraine, then crossing the glacier brooke and over a narrow path until the bottom of Engstligenalp is reached. Over the alpine pasture towards the inns and huts of Engstligenalp.

Depending on the number of summits you make, the tour will take between 5 and 8 hours from hut to hut.

The route may as well be done from north to south. More exhausting!