Traverse of the Goddesses

Upon summitting Mt Olympus, it can be seen that it does not have one summit, but rather, 6 summits! The largest and highest of these is the southernmost one, which is climbed via the main trail, and the 5 northern summit pinnacles can be bypassed to the west. But all of the summits can be climbed while staying fairly true to the ridge crest linking them. That is this route.

As far as I can determine by looking in guidebooks and asking around at the local climbing shops, these summits don't have official names. I felt giving them names would make them more interesting than merely referring to them as North Summit #1, #2, etc. In Andrew McLean's extreme skiing guide, Chuting Gallery, the couloirs are named after some of the male Greek gods, in keeping with the 'mountain of the gods' theme for Mount Olympus. I'm following that spirit by referring to the summits by the names of the female goddesses of Mt Olympus (there just happens to be 6 goddesses and 6 summits!). They are as follows:
The route bags all 5 summits, and it is characterized by solid rock and airy exposure, but the route is more like exposed class 3-4 scrambling with an occasional 5th class boulder move. It is also fairly non-committing as you can descend the chutes to the west down to the North Summits Bypass route. This can be done between Athena and Artemis, down the summit ridge of Artemis, and possibly between Artemis & Aphrodite, and Aphrodite & Demeter. 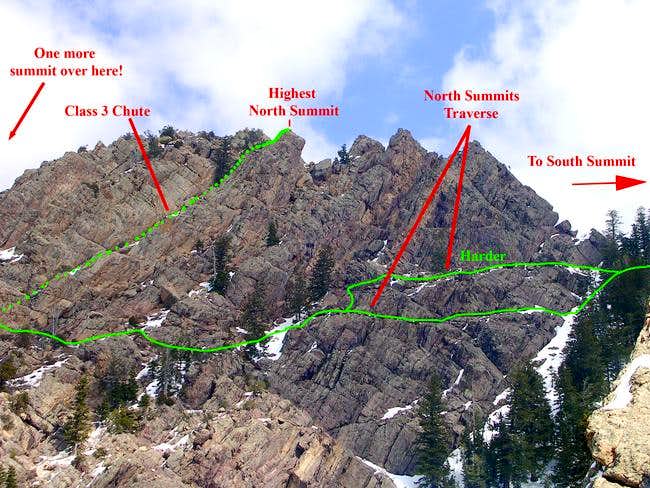 This route will be described heading from Athena to Hera, as this is the easiest direction to do it in.

From Athena, descend down to the saddle and climb the northern wall of Artemis via a class 4 chimney. From the top of this, traverse around the south side of the ridge to gain the diamond-shaped summit (cl 3).

From Artemis, scramble directly south and slightly west to an off-width chimney (cl. 4) squeeze/lower yourself down this, and downclimb (cl. 3) to a saddle. The next summit is Aphrodite, which can be climbed by two variations. Traverse along a ledge on the west side of the summit rib.

Variation 1: As you reach the rib, climb an exposed crack (cl. 4 to low 5th) to the airy ridge above the ledge. From here scramble to the summit (cl. 3). Then do a class 3 downclimb to the next saddle south.

Variaton 2: Traverse around to the south side of the summit. From here a sidewalk-width ledge takes you out onto the south face, with a 40 or 50 ft drop below. At one point you must step across a gap while reaching across for handholds, which is a dicey, but secure, move. Shortly beyond this the prominent ledge is absorbed into the wall, but you can keep traversing on a steeply sloped ledge, using solid holds and edging (low 5th), and eventually the saddle between Aphrodite and Demeter is reached. It is then a class 3 scramble to the summit of Aphrodite.

The north side of Demeter looks as impassable as that of Aphrodite, but upon closer inspection a large crack just to the left of the saddle provides solid climbing (cl. 4) with good and easy to find holds.

From Demeter, traverse along the east side of a rocky spur (cl. 2-3) to the next saddle, and climb the low rise to the summit of Hestia. From here you have an unobstructed view of the highest summit of Mt Olympus, Hera.

Next to Hestia's summit are some rap slings. You can either rap from here (lazy), downclimb on belay and then belay the second throught he rap slings from below (safe), or just free-solo climb down a broken face, staying along a broken crack (cl. 3-4). Soon you reach a large ledge of smooth quartzite with more rap slings. You can rap off the overhanging roofs directly south if you wish (I imagine that there are more rapps needed after this, with slings in place, but I didn't go this way)

An alternative is to follow ledges to the west, downclimbing to the south where it looks feasible. One crux reached is a steep chimney with a prominent ridge (low 5th). Beyond this, scramble down and around a large overhanging wall. At the base of it you can see the downclimb is almost over, but the crux of the entire route is next.

As you downclimb south, a dropoff is reached. Luckily, there are good solid holds at the top of the dropoff. Grip these and carefully lower yourself over the overhanging roof (5.6) ! If you stretch your arms as far as you can you may just barely be able to put your feet on the ground (depending on body height). You can also drop the last bit, or make use of the footholds on the underside of the roof to counterthrust as you work your hands down to lower handholds (which is more in tune with the motions you would probably need to climb up the overhang.

Once past the overhang, scramble down a class 3 crack. For those climbing the route in reverse, the downclimb exits between the south face of Hestia and a truck-sized boulder perched on a ledge to the west.

From here walk along the large saddle toward Hera. A large chute ascends directly from here. Climb up this chute, which is filled with snow until late in the year. At the top, work your way east (left) along easy class 3 ledges to the summit ridge. From here it is a class 2 boulder-hop to the summit. An alternative is to climb the broken face to the left of the chute (cl. 3-4).

If you're descending the main trail, read the Mount Olympus Trail route page.

A rope and a light rack might be useful if you want to protect sections, although the exposed sections are short. An ice axe could be useful for climbing the snow tongue that ascends the easiest route up to Hera from the large saddle.