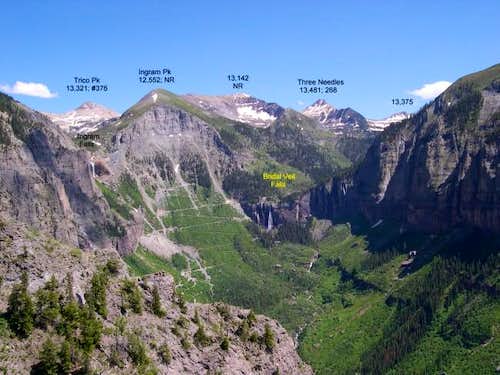 Trico Peak rises directly to the west of the 11018 ft Red Mountain Pass on Route 550 in the San Juan Mountains of southwest Colorado. It belongs to a long line of 13ers that make a continuous wall on the west side of Route 550 between the towns of Silverton and Ouray.

The infamous Black Bear Pass Road, one of the most difficult Four Wheel Drive roads in Colorado, can provide access to Trico Peak. This road starts on the Red Mountain Pass and climbs the eastern slopes of Trico Peak. After 3.2 miles, it reaches a 12850 ft saddle known as Black Bear Pass that separates Trico from unnamed Peak 13477 to the south. The road then drops into Ingram Basin to the west of Trico where it becomes very narrow (and one way)until it reaches the notorious switchbacks above the town of Telluride. (Click for more information about Black Bear Pass Road)

Trico has a long ridgeline to the east, which is made of rotten rock and will probably be a poor choice as a route to the summit. To the south, this ridgeline shelters the beautiful Mineral Basin (12400-12800 ft) which is covered with wild flowers and houses three small lakes. Mineral Creek originates in this basin and drains east down the steep rocky slopes creating a "waterfall" that can be seen from the lower sections of Black Bear Pass Road.

From Black Bear Pass, the hike to the summit of Trico Peak is a short walk over the rocky south ridge. Because of the beauty of the area, I highly recommend that you start your hike from Mineral Basin before the pass.

From the summit of Trico Peak, you can look west to see the Ingram Basin directly below. This basin is a large alpine bowl roughly 1.25 miles long by 0.4 miles wide that sits at an elevation of 11500-12600 ft. It is completley surrounded by mountains, except to the northwest where it drains over a cliff through a rather narrow opening. Black Bear Pass Road follows Ingram Basin to its outlet where the famous Ingram Falls and the infamous switchbacks are located. Bridal Veil Falls, the highest waterfall in Colorado, can also be seen from this spot. Unfortunately, from the summit of Trico Peak, you will not be able to see the falls or the switchbacks, nor could you see the town of Telluride. Telluride's airport, however, will be well visible. Mt. Sneffels and the jagged peaks around it are to the northwest while the Red Mountains sit to the east. Only a small portion of Route 550 near the Red Mountain Pass can be seen. The north slopes of Trico are rocky and appear very steep. Hiking north along the crest of the 13ers (onto Peak 13510 and the 13509 ft Telluride Peak) seemed difficult to me, however, SP member Sarahthompson mentions that this hike does not exceed Class 2 (see comments section and photo here). 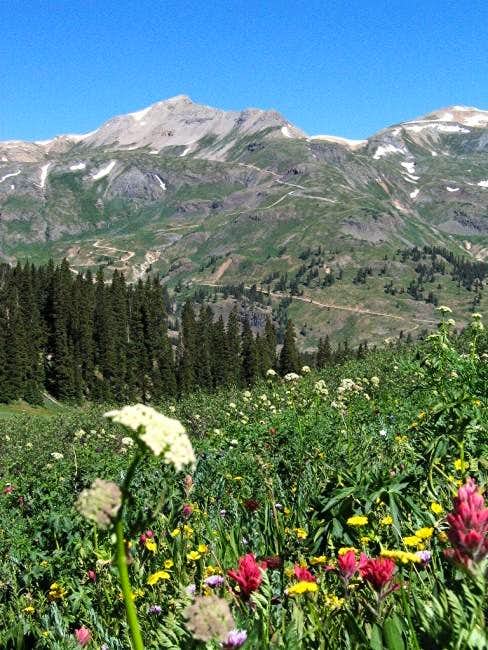 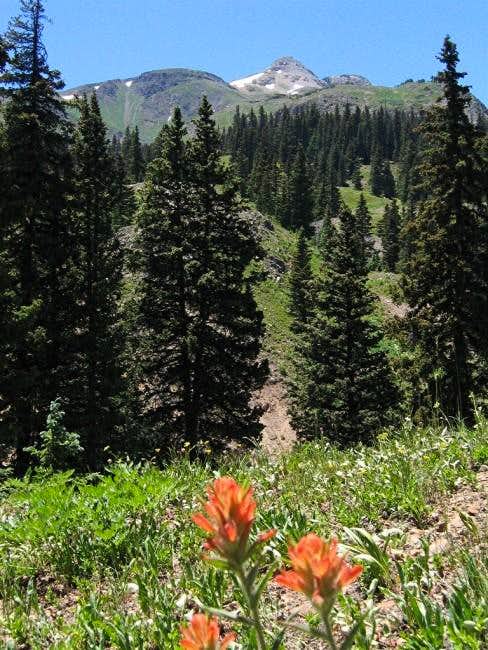 From Silverton drive 12 miles north (or 11 miles south from Ouray) on Route 550 to Red Mountain Pass. About 200 ft on the south side of the pass, you will see the beginning of the Black Bear Pass Road to the west. This road is signed.

Please note that I only drove from Red Mountain Pass to Black Bear Pass. This section of the road is moderately rough and is no more difficult than many of the other 4WD roads in the area. Everything that I have read, however, indicates that to the west of Black Bear Pass, the road becomes very rough and narrow (becoming one way from Route 550 to Telluride) and should only be attempted by experienced drivers. The book: "4WD Trails of Southwest Colorado" by Peter Massey and Jeanne Wilson will provide good information about this road (and no information about Trico Peak).

Drive the Black Bear Pass Road up grassy slopes and occasional growths of Pine trees. After one mile, you will reach an unsigned intersection. The road on the left will take you to Bullion King Basin. Continue on the right and go past the "waterfall"and up a few switchbacks to reach the Mineral Basin (2.5 miles from Route 550). This area is pretty flat and you can park anywhere.

Click for the forecast for the nearby town of Silverton.

Accomodations and Jeep rental available in Silverton. Most Jeep rental places will not let you drive the full length of Black Bear Pass Road.

The great photo under the Overview seems to link to a winter photo?

Thank you for your vote and for bringing that to my attention. Fixed.