Tromsdalstind is often simply called 'Tinden' (The Peak) by locals, as it it Tromsø's home mountain.  It is the closest peak over 1000 meters in height from the town center, and is the easiest to access.  Its easiest route is a strenous walk that normally takes 3-4 hours from the trailhead.  This peak attracts summiters year round, and hosts an extreme mountain run race to the summit in August. Race Link It's also popular as a skiing summit.  Because of it's huge popularity, and ease of access, Tromsdalstind has taken it's share of fatalities.  The most common way to die is from wandering out on the cornice and dropping off the east face.  The problem here is that the easiest route is corniced, and the summit ridge hides a huge cornice that isn't noticeable to the inexperienced.  Without insulting those who have mountain experience, I must clearly warn: DO NOT WALK ON SNOW along the summit ridge or on the north (left hand) ridge.

1238 meters is not normally a high altitude, but Tromsdalstind lies at 69 degrees north. This means arctic climate, and very unpredictable weather even in summertime. Normally the view from the summit is obstructed by fog, rain or snow. But on a clear day it is tremendous. To the South are the sharp peaks and small glaciers of the Troms mainland. To the East is the Lyngen peninsula. To the north and west are several islands in various sizes, including Kvaløya with Blåmann and surrounding granite peaks, and Senja, the largest island in mainland Norway.  Tromsdalstind has a high peak value as it's the highest peak on a large plateau that extends for over 20 kilometers, and is central to the entire climbing region. 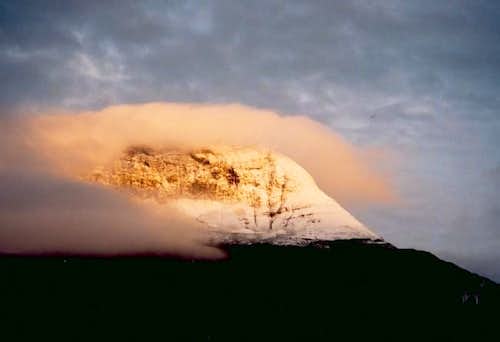 Tromsdalstind in late September, as seen shortly after dawn. 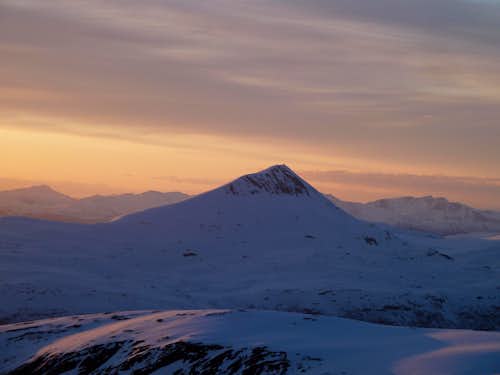 From this viewpoint, one can see the singularity of this peak.  Shot taken at 10:30 in the evening in mid May. 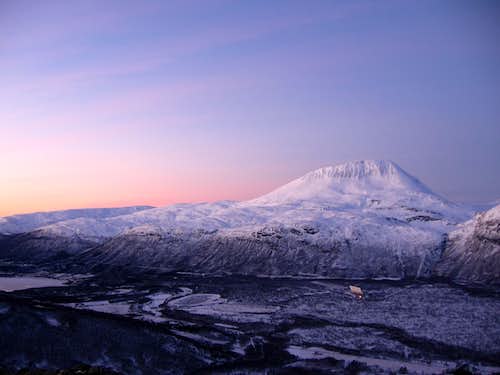 Tromsdalstind on New Years Day.  This is taken during the brightest part of the day.  Photo taken from BjÃ¸rnskardalstind.

North:The most popular access is from the suburb "Tromsdalen" that can be reached by either bus or car.  Directions are simple, follow the road from Tromsdalen directly toward the peak until the way is barred.  From here the dirt road continues up the valley to the primary hiking route: The northwest ridge, and the primary skiing route the southwest ridge.  The longest access is from the cablecar to about 400 meters on the hill "Fløya".  One is lured to this option, because of the free elevation gain, but it is a very long circutious route over three smaller peaks that must be crossed before the long rise to the summit.

South:  The southern approach gives access to the southwest ridge and is the best option for skiing.  Drive on E8 out of Tromsø and drive around Tromsdalstind.  After driving for over 15km, there is a large sign and turn out to the left for the Minkin Industri Park.  Turn left here, and follow signs to a large parking lot to the left of the buildings that is used by lorries.  The trail begins by following the fence around the industrial area.  It's an ugly start, but rewarding once left behind.

There are two distinct routes for the seasons.  Most hikers take the northwest ridge.  The southwest ridge is the preferred skiing route, and is occasionaly used as a hiking route.  There are a few other obscure routes that see the occasional ascent.  The most tempting of these is the eastern buttress.  Some of the small couliors on the west face have also been climbed. 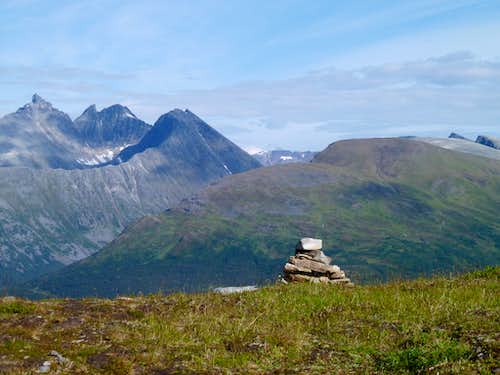 A hopeful cairn from the southern approach. Fagerfjell directly behind the cairn, Hamperokken, Bjørnskardalstind, and Stortind to the left.
This websites covers all known routes, popular or not: Tromsdalstind Route Overview

Summer hiking is usually from July to September. Skiing is possible from November til May. Because of the two months of darkness, summiting can be limited from late November until mid January.  The seasonal snowpack varies widely from year to year. Due to the midnight sun in late May and June, the snow melts rapidly causing wet snow slides. 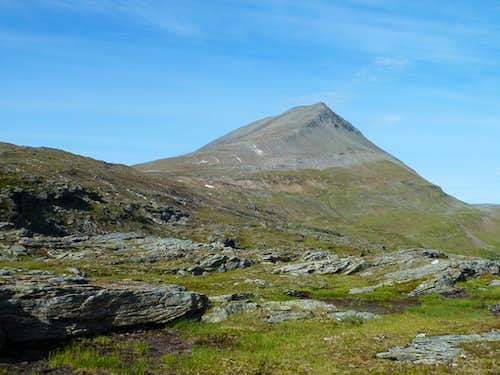 Tromsdalstind from the southern approach. 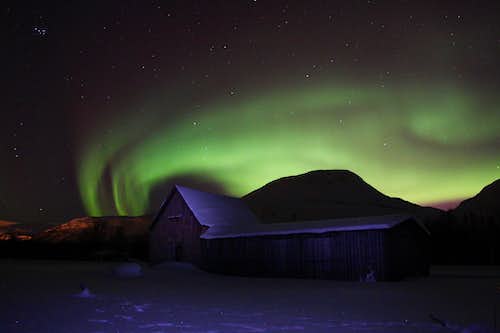 Camping is allowed, and possible near the river in upper Tromsdalen. Most people will still choose to stay at a hotel or youth hostel inside Tromsø.  Commercial camping with easy access to the peak and the town: Tromso camping