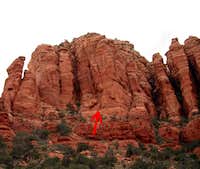 Trundlers Club buttress refers to a wall on the opposite side of the towers to the east of the “Chapel of the Holly Cross”, a popular tourist landmark in Sedona. Chapel of the Holly Cross is a church that is built into a significant rock formation with a huge cross as its anchor. Up and to the east on a ridge are a variety of red towers. To the left (north) of them is a large wall. On the other side of that wall is Trundlers Club buttress. There are two published routes (2011) on Trundlers Club Buttress, the route with the namesake itself (5.10d), put in by Seth Dyer in 2001 and Pussy Mind Trick (5.11d) established by Dyer and company later the same year. Both routes have a considerable amount of fixed pro. Pussy Mind Trick offers the best rap option for both. 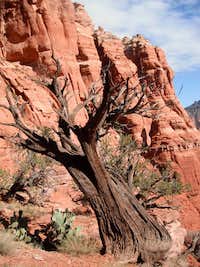 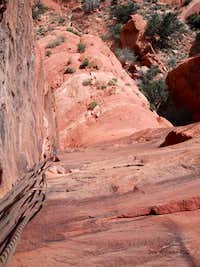 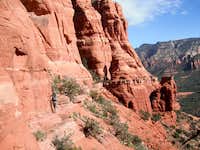 I climbed Trundlers Club with a local from Flagstaff and we both thought the fourth pitch was a slight sandbag at 5.10d. Although five pitches in total, the first and last pitches were fairly non consequential. The first pitch runs up a bit of slab and then follows a 5.6/7 corner to a fixed station below a bolted stem box corner. The second pitch is long and sustained at 5.9-5.10. You start out in the stem box and clip several bolts as well as place gear in the corner until you must traverse out right into chossy cracks. The FAers called this traverse “cross to the choss” on their topo. The second pitch continues up the sustained corner as it widens at the top below a cave which requires a short bit of off-width climbing to reach a hidden fixed belay on the left wall in the cave. The third pitch is short, but offers stellar exposure. Pull the north edge of the cave roof past a bolt with a finger crack up and right and a few jugs up and left. Traverse left when you can stem over to a ledge and another fixed belay. The fourth pitch is by far the crux of the route. Start up a sustained finger crack via steep lay backing until you meet a roof and need to make a tough couple of balanced face moves up and right past bolts and then back left to a fixed belay. The last pitch just moves to the rappel of Pussy Mind Trick by traversing past a couple of bolts on easy ground a few meters to a nice ledge with a fixed belay station. The first rap station is in front on the south wall from this ledge.

Locate the local tourist attraction in Sedona known as the Chapel of the Holly Cross, a church built into a local rock formation at the end of Chapel Road right off highway 179 in Sedona. Hike up the road to the chapel and catch a public hiking trail on the right side before reaching the final bend into the church parking area. Follow this trail as it dead ends into another trail. Turn left and follow this main trail as it heads toward the ridge containing the towers to the east. At the ridge, the trail circumvents the towers to the south. Shortly after passing the towers, look to head north via gullies and slick rock to the base of the main wall facing southeast which is north of all the individual towers. I included a photo showing Trundlers Club on this wall which involves a deep corner. We found a delicate white sandstone ledge that wrapped around the last tower before the wall. One fifth class exposed move along this rail allowed us to easily circumvent to the base of the route with minimal bushwhacking.

1st Pitch- 100’- 5.6/ Start up the slab at a very distinct feature: a small perfectly sphere shaped cave (think small animal size) at the base of the large corner system above. Place gear at will in a short corner (5.6-7) and continue up past three bolts to the base of a stem box corner and fixed belay.

2nd Pitch- 160’- 5.10b/ Stem up, even chimneying at times, the shallow stem box past three bolts. After the third bolt, pull out right into a chossy crack system. The FAer’s named this move appropriately “cross to the choss” on their topo. Clip another bolt before following the sustained finger/hands corner that eventually widens right below a cave. Make a few off width moves protected by a C4 #4 to enter the cave. A fixed belay is hidden on the left wall.

3rd Pitch- 50’- 5.10b/ Stem out of the cave on climbers right clipping one bolt. Protect in the finger crack up and right but use positive holds and edges up and left until you can swing left and gain a decent ledge that leads to the base of the next corner and fixed belay.

4th Pitch- 150’- 5.10d/ This pitch is by far the crux of the climb and both my partner and I felt it was a bit sandbagged for the grade. Layback and finger jam up the sustained finger corner until you meet a slanting roof protected by a bolt below and above. Make the crux moves of the day by smearing and balancing your way up the right face past a third bolt to the fixed belay above. There is a small pocket flake on the left wall that is of critical use in the final sequence.

5th Pitch- 50’- 5th/ To reach the rappel, climb out right over a few exposed moves past two bolts to a nice sized ledge and fixed belay. The first rappel anchor (chains-2011) is on the opposing wall to the south of this ledge.

We rapped the route known as Pussy Mind Trick with a single 70m rope. The first rap finds a small ledge. The second rap is a short one. Do not go over the overhang. Rather, when at the large overhang below, traverse right to the top of a corner to a rap station located there. Two more single rope raps get you to the ground where you left your packs. Follow the bolts of Pussy Mind Trick down.

A single rack from a few C3’s to C4 #4. Doubles from .4 to 3”. We did not place any wires. There is quite a bit of fixed protection en route, but the second pitch eats up medium to larger gear and the crux pitch eats up finger sizes. 70m rope, although a 60m might be adequate. Typical sandstone, not overly trafficked, thus helmet advised. Mix of slings and draws. Decent morning and noon sun in November, thus got by with a wind shirt and beanie for warmth but did get tossed around by some heavy winds.